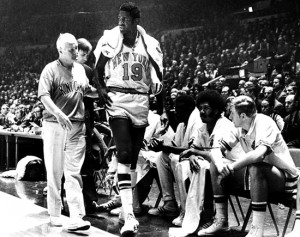 Hot – The writing was on the wall from the first Oklahoma City shot attempt of the ball game. When Serge Ibaka calmly drained the first bucket with his lethal mid-range jumper and the crowd exploded as if Jesus had taken the stage at a Pat Robertson led evangelical revival, it was more than clear that the Thunder had meticulously planned for Game 3. This meticulous planning, however, did not take place on the practice court. No, the organization did not focus its energies during the extended break between Games 2 and 3 working through offensive or defensive adjustments that could give them a reasonable shot at slowing down a Spurs unit that had used machine-like precision to annihilate OKC in San Antonio. Considering that the Thunder had lost the first two contests in “taken out behind the woodshed” blowout fashion, OKC seemed to have come to grips with the reality that they could not compete in that chess match. Rather, the Thunder had meticulously planned to counter the Spurs through the mind games that they had been waging from their front office. Oklahoma City wagered that their best hope was to manufacture every single last droplet of drama that they could muster out of the return of Serge Ibaka, ratcheting the intrigue up to Willis Reed like proportions, with the hope that the ‘chesapeake’ energy this sideshow would ignite from the OKC crowd would carry the Thunder players somewhere that they seemed incapable of getting to on their own, namely – the winners circle in the conference finals. To their credit, the dog and pony show worked. The Oklahoma City Thunder defeated the San Antonio Spurs last night 106-97 in a victory that saved the Thunder’s season (at least temporarily) and showed just how valuable that Serge Ibaka is to that organization. While NBA MVP Kevin Durant is a once in a generation offensive talent, after seeing the impact that Ibaka’s presence had on the defensive side of the basketball in Game 3, it is hard to imagine that had KD been the Thunder player injured for Games 1 & 2 of the series (instead of Serge) that the Thunder would have lost those two games by a combined 52 points. Of course I wouldn’t argue that Ibaka is more valuable to OKC than Durant, but Serge is the Thunder’s defensive MVP and it was on that side of the ball that they failed to show up in San Antonio. Even with a miraculously healthy Ibaka disrupting the Spurs offensive rhythm, the Spurs could have probably made the necessary adjustments over the course of 48 minutes to put ourselves in a position to win Game 3 in the fourth quarter if it were simply Ibaka’s physical presence on the court that we were trying to overcome. But his emotional presence (which was fueled by the ridiculous spectacle that the organization put on in disclosing information on his injury status over the course of the past two weeks) proved to be too much for San Antonio in Game 3. The Thunder, led by Durant and Russell Westbrook, were almost certainly too good to get swept anyway. So even if Serge had remained sidelined, San Antonio dropping at least one game in Oklahoma City was probably bound to happen. The question now is can the Spurs toss this game out the window by chalking it up as OKC’s ‘pride’ game and start refocusing for Game 4, or are we going to allow the ghosts of 2012 (which have been hovering around in the backdrop of this series) to really begin to haunt our psychological mindset moving forward into one of the most important Spurs playoff games in recent memory.

Game 4 of the Western Conference Finals has now become a must win for the San Antonio Spurs. We cannot allow the Thunder to parlay the life jacket that Serge Ibaka’s return from injury provided them into a perfectly executed home stand that evens this series at two games apiece. While I would still consider the Spurs heavy favorites to win the West in that scenario (with home court advantage over the final three games), the ghosts of 2012 could morph into fully functioning demons at that point. Demons are an extremely dangerous malady to have to deal with in the playoffs. Demons spread a dangerous disease and are extremely contagious since they can move unabated through an NBA locker room. The disease that demons spread seems to cripple some of the highest functioning NBA title contenders each and every year and can infect an entire roster in devastatingly modest amounts of time. What is the disease of which I speak? Doubt. If the Oklahoma City Thunder are able to win tomorrow night and even this series at two games a piece, there is a chance that (even though I would still consider the Spurs heavy favorites to win the series) the Thunder would take advantage of whatever doubt these 2012 demons infect the 2014 Spurs with to obtain a psychological advantage beginning in Game 5. However, if San Antonio can get back to crisp ball movement and if each player can show up to match the focus demonstrated by player of the game, Manu Ginobili in Game 3 (in other words, the type of focus that made us the best road team in the NBA this season), the Spurs will have a good shot a beginning the process of squeezing the life out of the Thunder’s season with a prototypical #BlackAndSilver road playoff win in Game 4. The 2012 OKC Thunder flipped the script on the 2012 SA Spurs by elevating their overall play as a team and matching the Spurs offensive ball movement in a ‘student becomes the teacher’ dominating way. That is not what transpired last night. The Thunder’s offense was still stagnant for big stretches and they still turned the ball over more times than the Spurs (18-16) over the course of the ball game. Last night, OKC relied on the manufactured energy of the courageous return of Serge Ibaka to make a few more plays than the Spurs in key stretches of the game. San Antonio lost the game because we were not quite mentally ready enough to absorb the blows and get right back to playing our style of basketball. OKC showed nothing, however, last night to indicate that they had flipped a switch to become the better overall basketball team as they did in the 2012 series. This looked, more than anything, like a sloppy road performance by the Spurs where we had an off-shooting night and couldn’t establish enough of our own pace to deal with the crazy, delusional crowd energy generated by the heroic return of ‘Willis’ Ibaka from the toil and suffering of an entire week on the injured list. Gimmicks and manufactured energy might get you a playoff win agains the 2014 San Antonio Spurs, but it is going to take something more sustainable than that to beat us four out of five times. Even though the Spurs now face our first legitimate ‘must win’ game since Game 7 of our first round series with the Dallas Mavericks, I fully expect the Spurs to be ready for the Game 4 challenge and to put ourselves in a position to put the Thunder up against he brink. Sure, the Hollywood scripted triumphant Ibaka return to the lineup has made the task at hand exponentially more difficult and yes, I’m sure that for the betterment of the californication of the NBA, the league has high hopes that the Ibaka storyline will continue to prove fruitful and help propel league MVP, Kevin Durant and Oklahoma City into the Finals to face LeBron James in another ratings bonanza, but the Spurs have worked too hard and come way too far to allow the inferior Thunder to derail our bullet train journey back to the finish line. Hollywood gimmicks are fun for a night, even for a night in a place as different from Hollywood as Oklahoma City, but real story telling takes hard work and a tenacious ability to overcome adversity, which in the end is the essence of the Willis Reed story. There is, however, a real Pulitzer Prize worthy story being written during these 2014 NBA playoffs. And it is a tale about redemption.