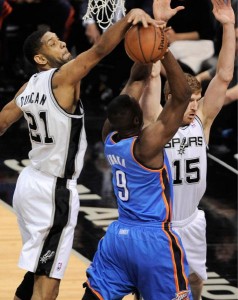 C.R.E.A.M. – Championships rule everything around me, C.R.E.A.M., get the trophy. Baller, baller skill y’all. For the seventh consecutive home playoff game, the San Antonio Spurs blew out our opponent last night defeating the Oklahoma City Thunder 117-89 at the AT&T Center to take a 3-2 lead in the 2014 Western Conference Finals. In a surprising tactical adjustment, Coach Pop started Matt Bonner instead of Tiago Splitter in order to stretch the court and pull Serge Ibaka away from the basket. While Bonner struggled from the field (0-4 for the game), the adjustment seemed to make a difference as Serge Ibaka’s defensive presence was less disruptive (2 blocks in 27 minutes) and didn’t lead to back-breaking Oklahoma City fast breaks. Also, Bonner’s defense seemed to have an effect on Ibaka’s shot, as well (Ibaka missed his first 5 shots with Bonner guarding him and finished the game 3-10). After a tense first quarter (the game was tied 32-32 after one) in which OKC came out looking poised to repeat Game 5 of the 2012 WCF and seemed to be carrying a great deal of confidence from having the Ibaka “Serge” momentum in the series, the Spurs calmly and systematically started imposing our will in the second quarter by moving the ball on offense and hustling on defense to build a 10 point half time lead. The flood gates opened in the second half as San Antonio put together a dominant performance on both sides of the basketball outscoring Oklahoma City 52-34 in the third and fourth quarter combined. The Spurs dominated every facet of the game last night out-rebounding OKC 48-35 and out-shooting them 51.3 percent to 43.2 percent. We more than doubled them up from behind the arc, as well, going 13-26 (50%) from downtown to their 6-24 (25%). Kevin Durant and Russell Westbrook were held to a manageable combined total of 46 points.

While the Spurs got big-time contributions across-the-board, Manu Ginobili’s stood out as he had a memorable throwback performance scoring 19 points in 21 minutes on 7-9 shooting (3-4 from distance) with 6 assists and 4 rebounds. He even, albeit accidentally, bitch slapped the 2014 NBA MVP while going for a steal late in the third quarter. Not to be outdone in the “Throwback Thursday” department, Tim Duncan snatched player of the game honors away from Manu because he also had a vintage performance scoring 22 points on 8-13 shooting while hauling in 12 rebounds and adding one of the most emphatic blocks in recent memory against the no longer in our heads (thanks Cory Joseph) Serge Ibaka. While there was most definitely palpable tension in the air throughout the city of San Antonio over the last couple of days after our disappointing performances in Oklahoma City earlier in this week, the Spurs answered the call at home once again to put Spurs fans minds at ease. Although the circumstances of coming home with the series tied 2-2, in and of themselves, didn’t necessarily warrant the panic Spurs fans were experiencing, it was the demons of the 2012 Western Conference Finals that caused a “here we go again” overreaction from late Tuesday night until the tip-off of Game 5. But last night those demons were fully exorcised as the Spurs proved that the Oklahoma City Thunder are still miles away from competing at a level that would allow them to win the game that they need in San Antonio in order to advance to the NBA Finals.

Now that Serge Ibaka has come back down to earth from the Hakeem Olajuwon perch he had played on in Oklahoma City after returning from vacation (err…I mean injury), the Spurs must capitalize on this opportunity to end this series in Oklahoma City and punch our ticket to the 2014 NBA Finals. San Antonio has lost 9 games in a row to the Thunder in that building. We are too good of a basketball team to lose to any team 10 times in a row in any building. We are due for a victory in the Chesapeake Energy Arena. Tomorrow night, I want to see that “the Starburys taste like Starburys” incarcerating 2003 on the road at American West Arena in Phoenix 87-85 swagger. You know what I’m talking about, right? I’m talking about that 2003 dynasty crushing, “Shaq and Kobe as a tandem” derailing, “Zen Master heart attack” inducing on the road at Staples Center in Los Angeles 110-82 “step on the champs’ throats“ swag. I mean, I want to see that “Dirk and Nash ‘best buds'” separating, “dust off Steve Kerr to twist three point daggers into Mark Cuban’s heart” executing 2003 on the road at American Airlines Center in Dallas 90-78 precision chutzpah. Am I making myself clear? I’m looking to see that “Jesus Shuttlesworth was only good enough to win rings as a third or fourth wheel” proving, “come and steal the SuperSonics and Kevin Durant away from Seattle” opportunity creating, “how did I not remember that Antonio Daniels played for the Sonics that year” memory questioning 2005 on the road at KeyArena in Seattle 98-96 swagalicious boisterousness. I know you’re digging where I’m going with this, right? I know you know what I’m talking about right here. The San Antonio Spurs have gone on the road in Game 6 of a best of seven series four times and closed out an opponent en route to the NBA Championship. It only seems fitting that we should do it for the fifth time in pursuit of our fifth ring. We have finally put the “Serge Ibaka is in our heads” nonsense to rest (not only did we put it to rest, but we crammed so much Nyquil down its throat that it is practically in a coma) and we are overdue for a W in Oklahoma City. If the #BlackAndSilver play our game tomorrow evening in Chesapeake Energy Arena, no amount of athleticism on the other side of the ball can beat us. We are the better team. We here now. Let’s get this done.