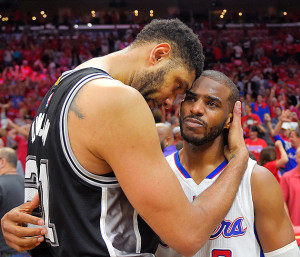 A Sky Full of Stars – Give hime credit. Chris Paul hit the shot of his life. The ball left his hand and passed by Tim Duncan’s finger tips (as the greatest active basketball player on the planet was closing quickly to block it) by the width of a piece of paper, but somehow it got by. The rejection of not only a basketball shot but also of Chris Paul as a clutch playoff performer was avoided as the ball amazingly slipped by Duncan’s fingers. It floated softly towards the backboard, bounced off, and dropped down through the net. One home cooked scorer’s table error and one Hail Mary inbounds attempt later, our season was over. Yes, the Spurs should have never been in that position. (We should have closed out at home in six.) Yes, San Antonio should have played smarter basketball down the stretch. (We should have protected our precious lead better late in the fourth quarter.) Yes, the Clippers’s scorers table screwed us out of running the play that could have gotten one of our shooters a final look at a three pointer to win the series. (If we get a clean look at a three in the final second, we would have buried it and the Clippers along with it.) Yes, two of the best four teams in the league should have never been playing in the first round to begin with. (If we had played an easier first round opponent, we probably would have been sharper and healthier by the time we met an opponent of the Clippers caliber in the conference semi-finals.) But give him credit. Chris Paul hit the shot of his life.

Unfortunately, this meant that (when I first started writing this three months ago) I was begrudgingly tasked with needing to report that the Los Angeles Clippers had advanced past the San Antonio Spurs. In typical Black & Silver fashion, (rather than simply ripping the band-aid off) I once again elected to take my precious, sweet time in finishing the last post of the season. Despite the fact that it is still hard to wrap my brain around twelve weeks later, the Clippers did indeed outlast the Spurs 111-109 in Game 7 of the Western Conference First Round series. The player of the game for the Spurs was the incomparable Tim Duncan who (at 39 years old) came up huge in a big playoff game for the billionth time in his career. Timmy amassed 27 points and 11 rebounds to put the Spurs one possession away from winning a second Game 7 on the road against a Chris Paul led opponent (they beat the New Orleans Hornets in Game 7 of the 2008 Western Conference Semi-Finals in New Orleans). In 117 Game 7s played in NBA history prior to this series, the road team has won only 24 times (21 percent). The Spurs faced a tall order attempting to do it for a second time in eight seasons. It makes it that much more painful to swallow when considering that we came so close but couldn’t finish off becoming the 25th team to climb that mountain. Oh, and did we ever have our chances? With 5:28 left in the game, San Antonio had a five point lead. This possession in the game is burned into my permanent memory. Chris Paul missed an 18 foot jumper and Tony Parker came up with the long rebound and sprinted down to get a fast break layup with only Chris Paul to beat. A healthy Tony easily extends the lead to seven in that situation but unfortunately that was not the player that was pushing a one man fast break in the guts of the biggest game of the season. The hobbled Tony that was playing that night lost the ball out of bounds and within 28 seconds, the Clippers had scored five straight to tie the game. It was a dogfight from there. Had Tony pulled back in that moment, ran some clock, and set up an offensive set, perhaps the outcome of the series would have been different. And there it is…the tortuous dissection of what could have been. After a year’s reprieve, Spurs fans like myself had once again been sentenced to a summer of what ifs with the ghosts of another playoff run cut short haunting our waking life and our dreams alike. Down the rabbit hole we go.

Were the Spurs good enough to win a championship this year? I think so. I know that the Golden State Warriors were counting their blessings when the Clippers ensured that Dub Nation would not have to face the Spurs in the Western Conference Finals. San Antonio was the only team in the league to win the season series with Golden State and in my opinion they were the team best equipped to upset the Warriors in the 2015 playoffs. There is not a perimeter defensive tandem in the league that had more capacity to lock up Stephen Curry and Klay Thompson than Kawhi Leonard and Danny Green. These two perimeter defenders are special as a tandem. With a few more years playing together, they could very easily prove to be the best defensive duo at the shooting guard and small forward position to play together since Michael Jordan and Scottie Pippen. Should Danny and Kawhi have gotten their shot to go up against Curry and Thompson in the Western Conference Finals, even with all the other injuries the Spurs were playing through I believe that we would have had a 50/50 chance to win the series. Had the Spurs had had the opportunity to defend their championship healthy, there is no doubt in my mind that the Warriors would not have had the necessary experience to dethrone us. Nonetheless, San Antonio was not healthy and did not hold up our end of the bargain. Perhaps we will get our shot at the Golden State Warriors in next season’s playoffs, but until then…they are the champs. Despite my strong feelings on how a hypothetical Spurs vs. Warriors 2015 Western Conference Finals would have turned out, I take nothing away from Dub Nation. Golden State earned their championship and should be congratulated.

They should enjoy it too. Steph Curry, Steve Kerr and company will soon find that defending an NBA title is an entirely different proposition than winning the first one. Repeating is never easy, but it seems it will be unusually difficult next year when you peer out over this summer’s post-free agency NBA landscape. Cleveland will be better than last year just by getting healthy and also by adding back court depth with their Mo Williams signing. The Clippers have improved by adding Paul Pierce and Lance Stephenson and because the organization collectively sent DeAndre Jordan a Check Yes or No note to ask him to freeze out his new girlfriend, Mark Cuban, and meet up in the middle school cafeteria to get back together. Memphis is still Memphis, ever present…lurking in the weeds. Houston kept most of its core together to remain a fringe contender. And then there is the #BlackAndSilver. I spent the first part of my summer hoping that the greatest shot of Chris Paul’s life wouldn’t turn out to be the final sentence in the final chapter of one of the greatest storybook runs in the history of professional sports. My fear that the Big Four (Gregg Popovich, Time Duncan, Tony Parker, and Manu Ginobili) had participated in their final NBA basketball game together was not only terrifying but it was also legitimate. Worst case scenario: Pop, Timmy, and Manu retire leaving Tony and probably Kawhi to lead a (Danny Green-less) fringe playoff squad coached by Ettore Messina. In full disclosure, I wasn’t actually worried about this doomsday scenario. I was fairly confident that Coach Pop and Tim Duncan were coming back but I was petrified that the Big Four era would end upon the announcement of Manu’s retirement. Under this scenario, even if we had re-signed Danny, the Spurs would have been a lock for a playoff spot but probably not a championship contender. Another likely scenario is that the Spurs could have brought the 2014 title team back together for one more run since injuries derailed our title defense last season. Had this happened we would have still been a fringe title contender but probably not one of the favorites. There was also a dream scenario for this off-season. A scenario so rapturous, it seemed preposterous to even contemplate. Therefore, I dared not even fantasize about the perfect off-season during May and June, but then July rolled around. Sometimes life is but a dream, because (and pinch me if this isn’t real and I need to wake up) this actually happened…

Straight from Tim Duncan: "I'll be on the court next year" … story coming soon on http://t.co/LMDPrVQ6z4

I'm happy to say I'm going home to Texas and will be a Spur!! I'm excited to join the team and be close to my family and friends.

ESPN sources say that Gregg Popovich, as of now, is intent on coaching out his entire five-year contract that he signed last summer

Happy to announce that I'm coming back next season. #gospursgo #TDwouldvemissedmetoomuch.

Free agent forward David West has agreed to terms with the Spurs, per league sources.

You’ve gotta love summertime. The addition of LaMarcus Aldridge and David West combined with the resigning of Timmy, Manu, Kawhi, and Danny plus the commitment of Pop to keep coaching equals the execution of an offseason perfected. It is almost not fair. Almost. Not only are we still title contenders but the Spurs perfect offseason has elevated Black & Silver: Reloaded to title favorites. With Aldridge and West, San Antonio won on the free agency market for the first time in franchise history. As important as it is to build a bridge to the post-Duncan era, I am most excited that these signings have added fire power for The Big Four to write another chapter in fairy tale that refuses to end. These historic figures still have one extraordinary epilogue in them which they will collaborate to write. There is no question that Gregg Popovich, Tim Duncan, Manu Ginobili, and Tony Parker have at least one more run left in them as a group. SIX in SIX-teen has a mighty fine ring to it, don’t you think? Thankfully, in the end, Chris Paul’s shot has proven to have just ruined a season rather than killed a dynasty. I’ll be spending the rest of my summer counting my blessings that we got all four back. And then some.