President Obama Gives a Eulogy for the Charleston Shooting Victims 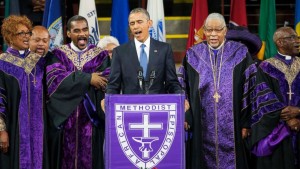 On Friday, June 26, 2015, President Obama gave a eulogy for Reverend Clementa Pinckney and the eight other victims of the Emanuel AME church shootings in Charleston, South Carolina. President Obama delivered his address inside the TD Arena at the College of Charleston. He gave an eloquent address that honored the victims and their families, and cited their faith as an example of how the power of love and grace can overcome hate. Rooted in the foundation of the black church, President Obama masterfully wove social justice into his prose by calling for action on issues ranging from race, the Confederate flag, voting rights, gun control, hiring practices, and poverty. He even lead the congregation in the singing of “Amazing Grace.” With it’s reflectiveness and determination, this address will likely be remembered as one of the most brilliant oratories Barack Obama has given while president. Reverend Clementa Pinckney, Cynthia Hurd, Susie Jackson, Ethel Lance, Depayne Middleton-Doctor, Tywanza Sanders, Daniel Simmons, Sharonda Coleman-Singleton, and Myra Thompson were killed in a race-based terrorist attack on June 17, 2015 at the Emanuel AME Church while holding bible study.