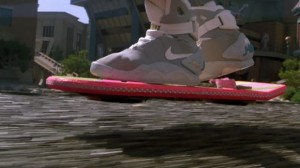 Friends S2:E2 – Greetings, Pheobes and Pheobos. How is everyone doing this fine Monday evening? I’m having a splendid day if I do say so myself. (Thanks for asking.) As I reported last week, I’m no longer experiencing the dread of writing this column that had been an overwhelming burden for me last season. My new philosophy this year (for when there is a post to be written) is to put my game face on, sit down at my computer, and (like James Harden deciding what sneakers to wear out of the house in order to go to the bank and cash a $200 million check from Adidas) just do it. Speaking of the Nike slogan, here’s a random observation. As hard as it may be to imagine, we have now entered the fall of 2015, which is the very same time period that Marty McFly, Doc Brown, Jennifer Parker, and Einstein traveled to from 1985 in Back to the Future Part II. In regards to today’s episode of Friends, this is neither here nor there but I find it fascinating when considering how far into the future 2015 seemed to me in 1989 when I first watched the movie as a kid. While Robert Zemeckis’ prediction of flying cars clearly didn’t come to fruition, the 2015 that he imagined did get a few things right. For one, hover boards exist now…sort of. Also, the sweet Nikes with power laces that Marty wears after arriving in 2015 Hill Valley are becoming quite a remarkable example of life imitating art. In case that isn’t enough, I’ve got another potentially juicy prediction from the movie about 2015 that could still come true. While walking around future Hill Valley, Marty discovers that the Chicago Cubs have won the 2015 World Series. Coincidentally, the Cubbies (who haven’t been in the postseason since 2008) have already miraculously clinched a playoff spot for the upcoming postseason. How cool will it be if they get hot in October and win their first World Series since 1908 in the same year that Back to the Future Part II suggests that they will? I guess we’ll know soon enough. On that note, I should probably move on from Back to the Future. After all, even though it’s quickly approaching…we’re still a few weeks away from Marty and company’s 2015 appearance. The exact date that they travel into the future is October 21, 2015. Perhaps we can explore my fascination with the Back to the Future interpretation of 2015 more when that magical day finally arrives, but for now…it would probably be wise for me to get back to the matter at hand.

Coming off of last week’s episode, the Friends character most in need of a time machine is Rachel. (You better believe it…I found the perfect segue back to today’s episode of Friends.) After suffering through the pain of seeing Ross and Julie together, I’m sure Rachel would have jumped at the opportunity to borrow Doc’s DeLorean so she could travel back to the week before Ross’ China trip and begin a relationship with Ross that would preempt him starting one with Julie. However, unfortunately for Rachel, Christopher Lloyd was not a guess star on today’s episode and it doesn’t appear that The West Wing’s Ainsley Hayes is going to be much help in the time travel department. Therefore, Rachel is left to suffer with the agony of having front row seats to Ross’ blossoming romance with Julie. And to add insult to injury, this week she has to deal with adjusting to the idea of Monica spending time with Julie as well. When Rachel discovers a lunch receipt for over $50 after Monica claimed to have gone to lunch alone, the two have it out in a hilarious scene in which Monica’s plutonic relationship with Julie is comedically framed to illicit a reaction from Rachel that one would expect to be the result of the type of jealousy that is created in relationships of the romantic variety. Will Monica and Rachel be able to make up after their fantastic Julie fight? Find out in the recap below. And for more exemplary Friends analysis…tune in next week a.k.a THE FUTURE (he says in a slightly deranged Doc Brown voice). Great Scott.

Recap in the Key of Phoebe – This is the one where Monica tries to keep her friendship with Julie a secret from Rachel, Ross struggles with the challenge of tasting Carol’s breast milk, Joey battles Hombre Man for the affection of a woman and also for respect in the workplace, Chandler counsels Joey on how to handle his duel with Hombre Man, Phoebe covers for Monica by lying to Rachel about Monica’s shopping trip with Julie, Monica assures Rachel that hanging out with Julie could never replace her friendship with Rachel, and Ross finally overcomes his fear of breast milk by grabbing the bottle and deciding to just do it.

Chan Man Quip of the Week – [The Setup] The gang (minus Rachel) is hanging out at Monica and Rachel’s apartment when Carol and Susan arrive to pick up Ben. Phoebe informs Carol and Susan that Ross freaked out when she tasted Carol’s breast milk. When Ross defends himself by asserting that breast milk is gross, Carol responds by asking, “My breast milk is gross?” Noticing the looming awkwardness, Susan interjects, “This should be fun.” Ross (hoping to recover from issuing the perceived slight) responds, “No, no, Carol. There’s nothing wrong with it. I just, I just don’t think breast milk is for adults.” [The Knockout] Chandler, never one to hold back from sticking his nose in, observes “Of course the packaging does appeal to grown-ups and kids alike.”