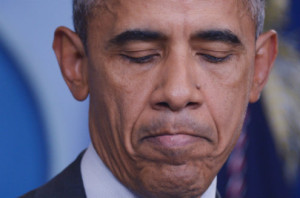 On Thursday, October 1, 2015, President Obama was forced to give yet another statement on yet another mass shooting. The President’s remarks came in response to the horrific news early in the day out of Roseburg, Oregon that a gunman had opened fire at Umpqua Community College. The attack resulted in ten people (including the gunman) dead and several others injured. President Obama delivered his statement from the James S. Brady Press Briefing Room at the White House. This latest incident in a horrific string of mass shootings in the United States had a visibly angry Obama place blame squarely on the American public for our inaction in response to this crisis. At one point during his statement the President said, “This is a political choice that we make, to allow this to happen every few months in America. We collectively are answerable to those families who lose their loved ones.” As we round the corner into another election season, President Obama used his remarks to issue a challenge to voters who want to see action in preventing mass shootings. He asked voters to evaluate a candidates positions on the policy proposals that could help prevent future occurrences of this senseless violence before casting their ballots. One would hope that Obama’s fiery remarks might help to finally spark some movement towards positive change, but based on past experience and the seemingly impenetrable stranglehold that the NRA’s extremist positions on gun control have on the U.S. Congress…it will likely continue to be an uphill battle to make any progress at all.