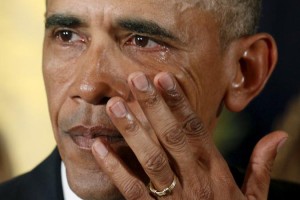 On Tuesday, January 5, 2016, President Obama addressed the nation from the East Room of the White House to announce commonsense gun reform measures that he is taking through executive action. Because of President Obama’s leadership, the United States will now require more gun sellers to get licenses and more gun buyers to undergo background checks. Contrary to the message that the NRA is spending millions of dollars propagandizing their constituents with, these measures do not infringe upon the rights of responsible gun owners and are not an attack on the 2nd Amendment. However, according to that pesky little thing known as scientific research, these measures will save innocent lives. Tears welled up in our president’s eyes during the announcement as he reflected back upon all of the mass shootings that have occurred during his time in office. He seemed particularly affected (and rightfully so) when referencing the innocent children who were massacred at Sandy Hook. As one of Barack Obama’s finest examples of presidential leadership to date, this 37 minute address is worth watching in its entirety. Thank you, President Obama, for standing up to the NRA.

“So the gun lobby may be holding Congress hostage right now, but they cannot hold America hostage. We do not have to accept this carnage as the price of freedom.” – President Barack Obama