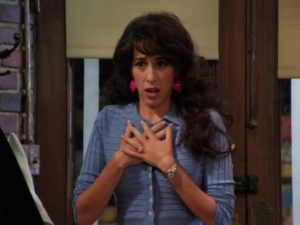 Friends S2:E24 – Her name was Lola. She was a showgirl with yellow feathers in her hair and a dress cut down to there. She would merengue and do the cha-cha and while she tried to be a star, Tony always tended bar. Yo! What is the damn dee-lee-o, Friends Crafters? OH. MY. GOD. It’s hard to believe but the end is nigh for the second installment of Friends 20/20. After you finish reading today’s Chan Man Quip of the Week, we will have completed exactly 20 percent of this seemingly endless project. Take that doubters and haters. Many of them believed we wouldn’t survive Fall 2014. Yet, here we are still standing one fifth of the way through the impossible journey. It’s been one hell of a ride so far. While I’m excited about getting a much needed break from my strenuous schedule of working one day a week, 24 weeks a year, I’ve also never been more determined to not only continue writing this improbable blog series, but also…I’ve never been more determined to continue improving the quality of the content to make it worthy of the time that you (the devoted readers) so generously give to me week after week. I’m humbled every Tuesday morning when I check the blog traffic and see that you guys are continuing to show up and allow me to do what I do best. Therefore, I solemnly pledge to you that after I get my hard earned four month summer vacation, I will come back in September ready to take this blog series to yet another level for Season 3. The doubters and the haters can suck it. They thought that our FRIENDship would never last. But you know and I know better. We know that every time the rain starts to pour…I’ll be there for you. And you’ll be there for me too. Until the end of time. Or at least until May 6. 2024.

I thought that today, if you’ll kindly indulge me, since we began this season talking politics (more specifically talking Donald Trump) in This Is Huge (our opening post for Season 2), it might be appropriate to bring this thing full circle and make a few comments on this year’s primaries (rather than doing a play by play break down of Monica and Richard’s season finale break up). After all, we will be in full-blown general election mode when we reconvene on September 19, 2016 for Season 3. Speaking of OH MY GOD…could the Republican party be any more bat shit crazy? When I wrote on September 21, 2015 (in the aforementioned This Is Huge), “We, as a country, should be collectively ashamed that Trump’s poisonous rhetoric and utter lack of substantive policy proposals has not only not been repudiated, but instead has rewarded him with a sizable lead for the nomination of one of our two major political parties a mere five months before the first primaries” never in my wildest imagination would I have contemplated that Donald Trump would actually win the freaking nomination. I thought for sure when Americans actually cast ballots that Donald Trump’s mixture of dangerous rhetoric and complete lack of qualifications would be forcefully repudiated in the voting booths. I clearly thought wrong. And even though Donald Trump is the nominee of a party that I have never voted for in my life, it is indeed a failing of our entire country that this man is a general election candidate for the presidency of the United States of America. We all bare some responsibility. While the Republican party should be especially ashamed, all Americans should be ashamed of the predicament we’ve put ourselves in. Besides our part in allowing the Trump phenomenon to take root, my team (The Democrats) should also be ashamed by what has happened in our primary elections. We have the opportunity right now to nominate a modern-day Franklin Delano Roosevelt (FDR) type figure named Bernie Sanders who is positioned to lead a political revolution to reclaim democracy and yet because of things like Super Delegates, closed primaries, and voter suppression…we are dangerously close to putting forward another moderate named Clinton instead. On top of being a corporatist and a foreign policy hawk, Hillary Clinton (fair or unfair) has multiple scandals plaguing her campaign and has such unfavorables within the American electorate that (despite what her surrogates within the Democratic establishment will tell you) she is extremely vulnerable to actually (as implausible as it might seem) losing the general election to Trump. Don’t believe the propaganda of the political establishment and corporate media. There is still time for the Democratic electorate to come to our senses and nominate Bernie Sanders. The California primary on June 7th could be a game changer. And since I will be “feeling the bern” on a beach somewhere tropical by the time June rolls around, let me ask you now…if you care about things like a living wage, universal health care, affordable college, and leaving a habitable planet for our grandchildren as much as you care about Friends, consider donating some time or money to Bernie 2016. Okay, I’ve said my peace. Don’t blame me if Trump is leading Clinton in general election polls when we reconvene on September 19th. Hopefully, on the contrary, come September there will be chickens and ducks in the world again and Bernie Sanders will be well on his way to the White House. Also, thanks for letting me go on an election rant. It feels good to get that off of my chest before we wrap for the season. Sorry if you happen to disagree with me on politics. Hey, at least we agree that Friends is the greatest sitcom of all time. Have an amazing summer. I’ll see you in the fall.

Recap in the Key of Phoebe – This is the one where Chandler has a mysterious online girlfriend, Monica and Richard break up when Monica realizes that Richard doesn’t want to have any more children, Rachel attends Mindy and Barry’s wedding despite the embarrassment of facing all the same people from her wedding when she ran out on Barry, Ross accompanies Rachel to the wedding and gives an awkward speech on her behalf, Joey tries to practice kissing guys in order to get a role in a Warren Beatty movie, Phoebe hypothesizes that Chandler’s mystery online girlfriend might be a big giant guy, and when Chandler meets his mystery online girlfriend at Central Perk and realizes it is Janice…Oh My God.

Gandalf Gaffes – Just when you were starting to believe that including the Gandalf Gaffes section of each blog post was an exercise in futility (after all, we’ve had a overwhelmingly gaffe-free Season 2), we will be ending the season with a score. If you remember from the Carol Willick incident in Season 1, the recasting of a character is a huge pet peeve of mine. We’ve already set a precedent that (no matter how legitimate the reason for the switch) we are holding the writer’s room accountable for the sins of the casting department when it comes to identifying gaffes. Today, we find our second such incident with the recasting of Mindy Hunter (Rachel’s former best friend). In Season 1, Episode 20, Mindy was originally played by Jennifer Grey. I’m assuming (since Jennifer Grey was a relatively big name actress at the time) that she was unavailable to reprise her role the next season for The One With Barry and Mindy’s Wedding. Jennifer is replaced by Jana Marie Hupp. A quick glance at Jana’s IMDb indicates that she been a career working actor but has never broken through to leading roles. Her notable appearances include Ed, Independence Day, and Barton Fink. Keeping with precedent, I will adjudicate the recasting of Mindy Hunter as a level one infraction.

Chan Man Quip of the Week – [The Setup] The gang is at Central Perk and Joey is trying to figure out why Warren Beatty said he is a bad kisser. Phoebe volunteers to kiss him in order to help him figure out if he’s doing something wrong. She stands up and meets Joey in front of the couch. They kiss and Phoebe reacts by saying, “Good. Very good. Firm but tender. I’d recommend you to a friend.” Joey celebrates momentarily and then, visibly frustrated, says, “Then I don’t know what it is.” He continues by asking, “What’s the problem?” Monica interjects, “Joey, you know, maybe you’re just not used to kissing men? You know, maybe you just tensed up a little bit? Maybe that’s what you need to work on?” Joey responds, “Yeah, that makes sense.” He then looks over whimsically to Ross giving a clear indication that he would like to kiss him. Ross reacts by informing Joey, “Over my dead body.” Joey then looks down at Chandler and gestures to try and illicit his permission. [The Knockout] A wigged out Chandler looks up at Joey and reports, “And I’ll be using his dead body as a shield.”