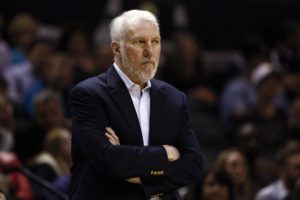 Us and Them – I didn’t get to see it. I listened to it on the radio on my way to the airport. So, no, I didn’t see it, but I heard Bill Schoening tell me how player of the game Danny Green was tripped by Steven Adams into Kevin Durant with 54 seconds left in a ball game that was tied at 90 a piece. Yep, I heard all about how the officials missed the trip and instead awarded Durant two undeserved free throws by calling a foul on Danny. The irony. I was driving to the airport for a business trip while Danny was tripping towards Kevin Durant (a driver of NBA business). So, nope…I didn’t get to see it, but I was listening as Durant proceeded to put his Oklahoma City Thunder up two points. Can you believe it? I was freaking driving the the god forsaken airport during this massive Spurs playoff game. So when Kawhi Leonard attempted to foul Russel Westbrook in the corner almost immediately after the ball was inbounded with nine seconds left and the Thunder nursing a one point lead, I didn’t see it. But I heard Bill Schoening tell me all about how instead of calling that foul (which would have put Russel Westbrook at the free throw line with the opportunity to extend the lead to three at best and thus keeping it a one possession ball game), the officials swallowed the whistle then and instead called a foul on LaMarcus Aldridge three seconds later as Westbrook completed an And One opportunity. Yep, I heard all about how the catastrophic officiating blunder gave Oklahoma City an insurmountable four point lead with six seconds left. I didn’t see it, but I heard all about how the Oklahoma City Thunder defeated the San Antonio Spurs 94-90 in Game 5 of the Western Conference Semifinals. No, I didn’t see it. And I don’t care. I’ve seen and heard enough in my 30 years as a Spurs fan to know that the officiating wasn’t the reason we lost the game.

Today, for the second consecutive time after a game at the AT&T Center, the National Basketball Association released a Last Two Minute Report that admitted the Spurs were the victims of officiating errors that impacted the outcome of a home loss. I heard about the report but I didn’t see it. I was too busy looking at a box score from Tuesday night’s game where I found plenty to see. I saw that the Spurs shot 35-88 or 39.8 percent from the field in our own house. LaMarcus was 6-21, Tony was 4-12, Timmy was 1-6, Boris was 1-6. We lost by four points. I also saw that the Thunder out-rebounded the Spurs by 18 rebounds, 54-36, again…in our house. Eric Kanter had 13 rebounds. Steven Adams and Westbrook had 11 each and the Thunder as a team had 15 offensive rebounds. And again, we lost by four points. There you have it. I’ve seen all I need to see. All the calls in the world can’t help a championship caliber team that is willing to settle for that type of pitiful effort against an opponent as dangerous as OKC. I mean, Russel Westbrook was dialed up to eleven all night long. He deserves credit. That dude wanted to win the game. He damn near went for a triple-double underneath our lights and our banners, finishing with 35 points, 11 rebounds, and nine assists. But forget Russell and his running mate Kevin Durant. This isn’t about them. This is about us. We are the better team in this series so for us to have that type of shooting performance and for us to give that type of rebounding effort at home is unacceptable. We did not deserve to win the game. Period. End of sentence. Forget the officiating. We need to play better. And we will play better. We have no choice. Our backs are against the wall now. In the past, when the Spurs have locked in with the determination to elevate our play to The Beautiful Game, we’ve become so dominant that it renders the officials irrelevant. As a matter of fact, it renders some of the greatest superstars on the planet irrelevant as well. The Beautiful Game. That is our unbreakable, unstoppable, unmatchable power. If we make getting back to it our focus, there is not a combination of referees and superstars that can stop us. To get past Durant and Westbrook, we need it. If we get passed them, guess what? The stars on the other side of the court only get brighter from there. We have the leadership to make it out on the other side of this rut we’ve been in for the last week and a half and start building the rhythm we need to remix that beloved ballad we call The Beautiful Game. Gregg Popovich, Tim Duncan, Tony Parker, and Manu Ginobili have seen it all and done it all. That is why we brought all four back. I have unwavering faith that tomorrow night our champions will find a path and lead us back home. The symphony isn’t ending on a false note in Oklahoma City. We’re just getting The Beautiful Game tuned up. Tomorrow night, we take the power back.