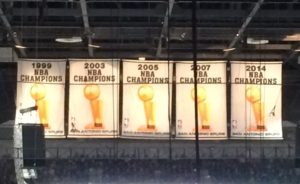 Check the Rhime – Just before Thanksgiving last year, while back home visiting family and friends in Texas, I returned to the AT&T Center for the first time since the San Antonio Spurs fifth championship banner had been hung in the rafters. This was also my first time back in San Antonio since my wife and I moved to Denver, Colorado a few short weeks after our beloved Spurs had won the 2014 title. It was Monday, November 23rd, 2015 to be precise and the Spurs defeated the Phoenix Suns 98-84 on that particular night. As it turns out, witnessing the five banners in person stood out to me more than anything that happened during the game (I can’t even remember who was the high scorer for the Spurs that night). I do remember, however, that I was super excited to head over to the H-E-B Fan Zone and snap a great photo of the five banners to keep as a reminder of my first time seeing them in person. As a diehard Spurs fan, there aren’t a ton of images that I can think of that bring me as much joy as this one does. This image makes me happy and this image makes me proud. It also serves as a reassurance. It is reassuring because this image that makes me so happy and so proud could not exist if I didn’t happen to be a fan of team that has a pretty good track record when it comes to overcoming adversity.

Two nights ago, the San Antonio Spurs played a disciplined and determined basketball game for 46 minutes which gave us an opportunity to win a third consecutive road playoff game in Oklahoma City. Then, unfortunately, something happened that tends to happen from time to time: one of the greatest basketball players on the planet hit some incredible shots down the stretch to ice a National Basketball Association game. Kevin Durant led the Oklahoma City Thunder to a 111-97 victory over San Antonio in Game 4 on Sunday night. Yep, unfortunately, the 2014 NBA MVP is impossible to guard when he’s in the zone (see Rucker Park circa 2011). And this inconvenient fact was on full display the other night as he lit us up for eight points in final 2:26 (17 all together in the fourth quarter) of a close ball game to leave us in his dust. Game over. Series tied 2-2. When a player of Durant’s caliber gets loose and starts making the types of shots he was making down the stretch, all you can do is tip your cap. The player of the game was Boris Diaw. Bobo came up huge in Game 4 scoring 11 points on 5-8 shooting and grabbing three rebounds for good measure. Diaw’s scoring came at crucial junctures in the game and his play was one of the biggest reasons why the Spurs were still within striking distance with two and half minutes left to play. A fantastic Game 4 contribution from Boris aside, in the end the Spurs should have expected that Kevin Durant was going to lead the Thunder to a home victory in this series with a performance like this. It is unrealistic to assume that a player that good can be held in check at home for an entire series. Hopefully, all of that In the Zone Kevin Durant shooting is now out of his system and remains that way for the duration of the series.

For any Spurs fans who are feeling those familiar dreadful feels about the possibility of impending doom, (while admittedly I am feeling some of those feels as well) let me give you a few reasons why I remain relatively calm and confident despite the circumstances. First, remember that the Spurs still have home court advantage in the now best of three Western Conference Semifinals and we have only lost TWICE at home the entire 2015-2016 season. Thinking back to the week of Thanksgiving when I was back in Texas, that seems like a really, really long time ago. Yeah, the Spurs have only lost TWICE in the AT&T Center since then. Secondly, the Spurs were only one point and one historically horribly officiated play away from being up 3-0 in this series prior Durant going all Durant in Game 4. Thinking of things in those terms gives this series an entirely different complexion, doesn’t it? The Spurs have outscored the Thunder by 21 points so far in this series. That is a pretty sizable cumulative scoring advantage for a series that is tied 2-2. Thirdly (and most importantly), the Spurs have players on our roster who have faced and overcome adversity in more playoff series than most NBA players would dare to dream of even playing in (much less winning). Once again, you don’t get to raise five championship banners into the rafters without having a pretty good track record of overcoming adversity. Case in point, look at all of the times that the #BlackAndSilver have been in this exact same situation during the Tim Duncan era and persevered to raise a banner:

The series now moves back to San Antonio tonight for Game 5. After the ball tips this evening, I will keep the image of those five banners in my mind as reassurance throughout the game and throughout the rest of this series. The banners are reassuring because they serve as a reminder of our proven ability to overcome adversity and persevere. Hopefully, when it’s all said and done, those beautiful banners (and all they represent) will once again factor prominently in determining what separates us and them.