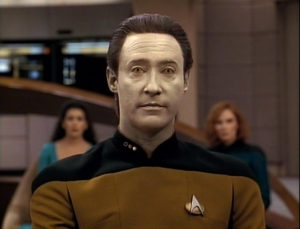 Good – What are we talking about? Data? We’re talking about data, man. We’re talking about data. We’re talking about data. We ain’t talking about the game. We’re talking about data, man. Different bat time, different bat channel, same bat story. The San Antonio Spurs have now defeated the Memphis Grizzlies an impressive ten straight times in the postseason after vanquishing our division rival 96-82 in Game 2 of the Western Conference First Round series deep down in Titletown, TX on Monday night. Grizzlies coach David Fizdale is clearly sick of watching reruns of Star Spurred: The Next Generation starring Kawhi Leonard as Data (an artificial intelligence and synthetic life form desigend in a laboratory to perfect the game of basketball). Can you blame him? I mean, he basically just watched the same episode for the second time in three days. He’s so sick of watching reruns, in fact, he decided to take it upon himself to do a remake instead during his postgame press conference on Monday night. Apparently, Fizdale has the Answer for why the Grizz lost the game and was more than happy to express it by channelling his inner-Allen Iverson. In case you’ve been living under an NBA rock, Memphis’ rookie head coach went off after Game 2. This rant, or motivational tirade, or van down by the river speech, or whatever you want to call it has caused quite a stir on social media these past 48 hours and today cost Fizdale a significant chunk of change. I think it’s safe to say that the episode has gone viral and won’t soon be forgotten. So let’s examine exactly what Coach Fizzy said, shall we?

“It’s unfortunate that I’ve got a guy like Mike Conley, who in his whole career’s got zero technical fouls. And just cannot seem to get the proper respect from the officials that he deserves. It was a very poorly officiated basketball game. Zach Randolph, the most rugged guy in the game, had zero free throws, but somehow Kawhi Leonard had 19 free throws. First half we shot 19 shots in the paint and we had six free throws. They shot 11 times in the paint and had 23 free throws. Not a numbers guy, but that doesn’t seem to add up. Overall, 35 times we shot the ball in the paint, we had 15 free throws for the game. They shot 18 times in the paint and had 32 free throws, Kawhi shot more free throws than our whole team. Explain it to me. We don’t get the respect that these guys deserve, because Mike Conley doesn’t go crazy, he has class, and he just plays the game, but I’m not gonna let them treat us that way. I know Pop’s got pedigree and I’m a young rookie, but they’re not gonna rook us. That’s unacceptable. That’s unprofessional. My guys dug in that game and earned the right to be in that game. And they did not even give us a chance. Take that for data!”

Fitzdale’s logic is flawed. It assumes that taking shots in the paint automatically equates to drawing fouls. The Spurs coaching staff is renowned for teaching players how to play defense and contest shots without fouling. Just because the Grizzlies were finding shots in the paint doesn’t mean they were getting fouled. It is insulting to our organization’s defensive infrastructure for Fizdale to insinuate as much. Were there missed calls? Sure, of course there were. Most notably, Mike Conley was probably fouled by Danny Green driving the lane on LaMarcus Aldridge with 6:03 left in the fourth quarter and the Grizzlies down eight, 83-75. It’s unfortunate. But it happens to every team. Quite frankly, it happened to us in Game 1 of this very same series (the Grizz were getting the friendly whistles on Saturday night) and it’s happened to us in dozens of playoff scenarios that are more tirade-worthy than this one that Coach Fizdale is fuming over. I know it’s tough when you’re new to it (at least as a head coach) but don’t worry, bro. You’ll get used to it. It’s happened to us more times in the past nineteen playoff runs than I could even attempt to remember. And since I don’t care to remember anyway, we can just look back to last year to find a more tirade-worthy refereeing hatchet job than the one Fizdale’s Grizzlies experienced on Monday night. Don’t forget that we lost not one but two games last year because of bad calls in our tight semifinal series against OKC. Were we mad about it? Or course, but that’s just the breaks. Part of the challenge of playoff basketball is to play well enough to not give the referees the opportunity to swing the outcome of a game or a series with a blown call. In other words, keep a sizable, decisive lead on your opponent and then bad refereeing can’t sink you.

While I give Memphis credit for showing the resolve to claw their way back into the game, with all due respect to Coach Fizdale, this loss wasn’t on the refs (making his tirade actually quite laughable). A couple of extra trips to the foul line wouldn’t have swung a fourteen point defeat. I suspect that after Fizdale dug a little deeper into the numbers, he might have felt a little embarrassed about playing the refereeing “victim” car in this scenario. Here’s why. The Grizzlies shot 31-82 from the field (37.8 percent) including 7-27 from distance (25.9 percent). That’s simply not good enough to get a road victory in the playoffs.. The crux of Fizdale’s argument during his tirade was that the Spurs took 32 free throws compared to the Grizzlies only taking 15 and Kawhi Leonard (19) shot more than his whole team. Essentially, we got 17 more shots from the line so Fizdale was arguing that that was the difference in the game. Okay, yes there was a massive free throw disparity but let’s dig a little deeper. What he failed to mention is that the Grizzlies took 21 more field goal attempts than we did. In other words, there was also a massive field goal disparity. This resulted in part from the Grizzlies getting four more offensive rebounds and committing six fewer turnovers than us but was also a by-product of the Grizzlies going to the line less than us (less free throws means more field goal attempts). Let’s keep digging into these numbers a bit. 17 more free throws only equates to 8.5 more shots than the opponent. Take those 8.5 away from the the 21 more field goal attempts the Grizzlies had in the game and Memphis still had 12.5 more opportunities to score than we did. The Grizzlies lost by 14 points (or 7 two-point field goals). Fizdale’s club lost this game all on their own. Blaming the officiating for this one is a huge stretch.

The player of the game was obviously Kawhi Leonard, once again. The Klaw poured in 37 points on 9-14 from the field and an exceptional 19-19 from the charity stripe. This was the third greatest playoff performance from the free throw line in league history (Dirk Nowitzski went 24-24 against Oklahoma City in 2011 and Paul Pierce went 21-21 against Indiana in 2003). Oh, did I mention that the Klaw also collected 11 rebounds? Kawhi was once gain laser focused and up to the challenge of leading his teammates into playoff battle. Grizzlies defenders must be seeing Barkleyesque downhill fast break dunks and Jordanesque fade away jumpers in their sleep right now after the offensive display Kawhi has unleashed so far in this series. During the two games in San Antonio, the best player on the planet was a combined 20-28 from the field (71 percent shooting) and 28-28 from the free throw line (100 percent shooting). To quote the bombastic David Fizdale (and to continue playing up my Star Spurred: The Next Generation theme), “Take that for data!”

Speaking of Kawhi, there’s something I’ve been meaning to get off my chest for a few weeks now. There’s something that baffles me about the way the beloved “experts” in the national media talk about his game. It’s a common talking point right now to call Leonard “the best two-way player in the game.” This makes absolutely no sense to me. If Kawhi is the best two-way player in the game, then he is the best player in the game. Period. Last time I checked, basketball is played on two ends of the court. Basketball players spend about half of their time on the court playing defense. In my opinion, you can’t be the best player in the game – or the MVP for that matter – if you’re only mediocre half of the time you are on the court. It doesn’t matter how brilliant you are on offense, if you don’t play defense at an elite level you’re simply not better than a player that plays at an elite level on both ends of the court. With all due respect to James Harden, Russell Westbrook, and Steph Curry, even though all of them are as good or better than Kawhi at offense, none of them are as good at the game of basketball. It’s simply a fact. In Uno Triunfo, I called Kawhi Leonard the best basketball player on the planet. His only competition is LeBron James and (to a lesser extent) Kevin Durant now that Durant’s defense is consistently elite. To be clear, I still consider LeBron James to be the greatest active basketball player in the world. If I needed one player on my team to win a Game 7 in the NBA Finals, I’m still taking LeBron. While also a Finals MVP, Kawhi obviously still has to accomplish a lot more in the postseason to catch up to LeBron when measuring greatness. But if I need one player on my team to win basketball games throughout an NBA season in 2017, I’m taking Kawhi. Today, he’s the best in my opinion. I give him the slight nod over LeBron because, with all of the miles LeBron has logged, his defense has understandably slipped a bit late-prime moving into post-prime. Thanks for letting me get that off my chest.

I’ll close by warning that the #BlackAndSilver and every fan out there in Spurs nation need to be extremely guarded when the ball tips tomorrow night at the FedExForum in Memphis. As misguided of a rant as David Fizdale’s Monday nighter was, it would be foolish of us to not expect a fiery Grizzly squad to use it as the fuel they need to claw their way back into the series at home. The Grit N’ Grind house is going to be rocking like no one’s business tomorrow, I guarantee you that. The Spurs and specifically our newest franchise cornerstone, Kawhi, need to bring the same level of intensity and focus on the road that we have shown thus far at home in the 2017 playoffs. One irrational, misguided rant could still prove to be the medicine Memphis’ veteran core needs to dig themselves out of a hole and back into this series. Finally, in the spirit of giving some closure to one of the more remarkable meltdowns in NBA history, I have some advice for Coach Fitzdale moving forward in this series. Win or lose, long series or short. Everything is going to be okay, my man. Sit down. Be humble.