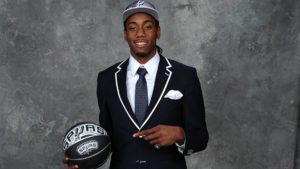 Forever – Last name EVER, first name GREATEST, like a sprained ankle, boy, that Black & Silver franchise ain’t nothin’ to play with. Wasn’t this whole thing supposed to have ended six years ago? I mean, I listened to the “experts” back then. When the San Antonio Spurs failed to advance to the conference finals for three consecutive seasons, starting in 2009, the “experts” told us the dynasty was dead. “Nothing lasts forever,” they said. The 2011 first round upset loss as the one seed was supposed to have been a funeral for the Spurs’ dynasty, right? “All good things must come to an end.” Isn’t that what the “experts” told us? Yeah, right. We want this thing forever, man. I’m not going to lie. It was fun watching the “experts” scramble to jump back on the longevity bandwagon when the Spurs returned to two more NBA Finals and won another title after they had already buried us. Indeed, after having shown up and dutifully served as pallbearers during their self-imagined 2011 funeral, how quickly they forgot. By the time Tim Duncan was hoisting his fifth trophy in the summer of 2014, most “experts” had completely erased it from their memory that they had left us for dead three years earlier. So it goes, I guess. On and on. Once again, this past offseason, after our unexpected collapse against Oklahoma City in last year’s Western Conference Semifinals and then the subsequent retirement of Timmy – the greateat all-time player in franchise history – these same “experts” have been back this year predicting the death of the Spurs dynasty once again. “It’s impossible for a team to lose a top-five all-time greatest player and still continue to win 50 games year after year after year.” That’s what they told us, right? I guess they were correct, in a way. Having lost Tim Duncan to retirement over the summer, the Spurs didn’t win 50 games in the 2016-17 season. We won 61 instead. The greatness of the Spurs transcends one player (even one as singular as Tim Duncan) because one player can’t play forever. And the fact that one player isn’t eternal doesn’t matter because why, class? We want this thing forever, man. You get it, right? Sho nuff. But exactly what is the THIS we want to keep forever? I’m glad you asked. We want to keep forever a label that all of the so called “experts” never thought we could obtain. A label that’s so difficult to acquire, only two other franchises have ever captured it. GREATEST FRANCHISE EVER. (First, middle, and last name.) That’s right, class. The San Antonio Spurs have now surpassed the Boston Celtics and Los Angeles Lakers as the NBA’s greatest franchise ever. It’s indisputable. Don’t agree? No problem. Here’s a few facts for you to chew on that pair nicely with the haterade you’re so clearly fond of drinking. The San Antonio Spurs have now won 50 plus games for a unfathomable 18 consecutive seasons. Here’s the kicker. It would be 20 consecutive seasons had the 1999-99 season not been shortened due to a lockout. The Spurs went 37-13 (.740 winning percentage) that year en route to the title. Had it been a full 82 game schedule that winning percentage would have put us at around 61 wins (same as this season). So, since the Spurs clearly played 50 plus win basketball that season as well (despite the lockout), we have essentially played 50 plus win basketball for two straight decades in a row. To put that in perspective, the next longest streak of 50 plus win seasons is the Los Angeles Lakers with 12 consecutive (1980-91). Considering that our current streak of 18 and counting is already 50 percent longer than the next best in history, it is unlikely to ever be broken. I say this not only as evidence that the San Antonio Spurs are the GOAT franchise but also to remind everyone that the “experts'” reports of the death of the San Antonio Spurs’ dynasty were, are, and will always be greatly exaggerated. The Spurs are the most successful franchise in NBA history and we don’t plan on letting it end. We want this thing forever, man. Still don’t agree? Let me know how this one tastes. The Spurs have made the playoffs a ridiculous 37 out of 41 seasons in the NBA and 45 out of 50 in franchise history (including ABA). There is not another NBA franchise that comes even close to that percentage of seasons making the playoff. Don’t take my word for it. Look it up. We want this thing forever, man. I still haven’t convinced you? Your’e killing me, Smalls…but here’s another one. The San Antonio Spurs are the NBA’s all-time leader in winning percentage. And with a .621 winning percentage compared to the .598 winning percentage boasted by the second best franchise, the Los Angeles Lakers, we’re the NBA’s all-time leader in winning percentage by a mile. With Kawhi Leonard in his early prime paired with the best coach in the NBA, there is no indication that we’ll slow down anytime soon. Or ever. I’m sure there will be a fresh batch of reasons for the “experts” to predict the Spurs impending demise again this summer (as they do every summer). Let ’em at it. Every year they do it and every year they’re wrong. (And once proven wrong suddenly develop amnesia.) And so it goes, I guess. On and on. All I know is we’re not going anywhere. We want this league forever, man.

Case in point, on Saturday night in front of a rowdy, pre-Fiesta crowd of 18,418, the San Antonio Spurs defeated the Memphis Grizzlies 111 to 82 – snatching Game One of the Western Conference First Round series. The game started out tense with both Marc Gasol and Mike Conley propelling the Grizzlies to an early 13 point lead at 28-15 with 2:29 left in the first quarter. But in typical Spurs fashion, we kept pounding away and cut the lead to five by the end of the first. By the end of the second, our attack had weakened the structure of their game plan significantly, taking a three point lead of our own into halftime. We busted the dam wide open in the third using our suffocating defense to take complete control. When the smoke cleared from the explosive period, we had outscored the Grizzlies 32-15 to extend our lead to 20 points. That was a wrap. The services of our starters were hardly needed during the fourth quarter and the #BlackAndSilver won Game One going away. Several Spurs stepped up big in the first playoff game of the post-Duncan era. Most notably, Tony Parker immediately shifted gears into playoff beast mode logging an outstanding 18 points on 8-13 shooting and applying constant pressure on the Grizzly defense. It remains to be seen whether this was a flash in the pan or what we should expect to regularly see from Tony during this postseason run. I know one thing, though. If Tony can indeed play at this level consistently throughout the playoffs, the rest of the field is in for a world of hurt. The next player deserving of mention is Danny Green. While Danny only contributed two points on a pair of free throws on the offensive end, he was spectacular on the defensive end. Danny had four blocks and one steal and was the primary defender involved in holding Mike Conley scoreless from the 8:40 mark in the second quarter on. L.A. came to play, as well. After a shaky start, LaMarcus Aldridge settled in to have a solid evening with 20 points and 6 rebounds. He also did his part in ratcheting up the Spurs defense after the first quarter playing Gasol and Zach Randolph extremely tough in the post. Also, an honorable mention to Jonathan Simmons because if I had to choose one play that sums up the stifling defensive performance San Antonio delivered (in holding Memphis to 52 points over the final three periods), it would be this…

While many Spurs chipped in with exceptional performances in the first playoff game sans Timmy, the player of the game (surprise, surprise) was Kawhi Leonard. The Spurs newly anointed franchise cornerstone carved up bear meat last night like he’s practicing to win the Best Butcher in Texas contest later this month. The Klaw unleashed 32 points in 32 minutes on a ridiculously efficient 11-14 from the field and 9-9 from the free throw line. He added in 5 assists, 3 rebounds, and 2 steals for good measure. All of this without playing in the fourth quarter. Every one who doubted him is asking for forgiveness. Earlier we talked about there being no end in sight to the Spurs run of dominance. The acquisition and development of Kawhi Leonard is unquestionably the biggest reason why this is the case. In a lot of ways, we have the Memphis Grizzlies to thank for our eternal twist of good fortune. Who laid the groundwork for the funeral that the “experts” had for the Spurs’ dynasty in the summer of 2011 after the Spurs were eliminated in the first round as a one seed? The Memphis Grizzlies. When Gasol, Randolph, Connelly and company decisively defeated and embarrassed a 61 win one seed Spurs club in the first round, Coach Pop and R.C. Buford realized that our team needed to get younger and more athletic on the wing. How did Coach Pop and R.C. respond? By making one of the biggest gambles in franchise history, trading George Hill (Coach Pop’s favorite player) on draft night for a skinny prospect from San Diego State named Kawhi Leonard. Clearly, the gamble turned into a grand slam as the Spurs unprecedented run of greatness has been extended infinitely beyond the horizon by the arrival and subsequent development of Kawhi into a bonafide superstar. Oh…by the way, the Spurs are now 9-0 against the Memphis Grizzlies (the team who allegedly killed the Spurs’ dynasty) in the playoffs since acquiring Kawhi Leonard during the 2011 draft. And if the determination on display last night by the Spurs newest franchise cornerstone is any indication, he doesn’t plan on stopping at all. Ladies and gentleman, that skinny prospect from San Diego State has officially arrived. It only took Kawhi Leonard six seasons, an unrivaled work ethic, and the city of San Antonio to become the best basketball player in the world. If you haven’t been a part of it, at least you’re about to witness. I predict that by the time Kawhi finishes this playoff run, he may have just made it impossible for anyone (no matter how prestigious their expertise) to deny that we got this thing forever, man. He’s just that good.