The Chick and The Duck 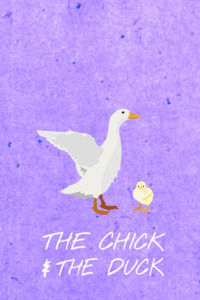 Friends S3:E21 – Welcome back, girls and boys. I hope everyone enjoyed our week off and more importantly, I hope everyone took that extra time to really apply yourselves to putting forward your best effort on the homework assignment. Go ahead and pass your papers to the front, class. Let’s see what we have here. That means you too, Johnny. No more monkey business. Just because you’re sitting in the very back doesn’t mean I can’t see what you’re up to. Keep passing those papers to the front, kiddos. Okay, great. Remember, these will count for 20 percent of your final grade. Damniit, Johnny…Susie’s beret is not a toy, give it back to her. In fact, go to the principle’s office. I’ve had enough of your shenanigans today. Attention, everyone. Now that Johnny is gone, I need everyone’s eyes on me. I’ll have these papers graded by next Monday and will return them to you then. I’m looking forward to seeing what everyone came up with. Let’s open our books up to the third chapter, page 21. Moving right into our lesson, in today’s episode we are finally introduced for the first time to the characters who have the honor of representing the official Friends 20/20 hashtag. They are our blog series’ torch bearers, if you will. The first of these two iconic characters to make her debut into the Friends universe is the Chick. On an impulse Joey decides to go to the pet store and adopt her. Later in the episode, when Chandler tries to return her because the guys decide they’re not up for the responsibilities of pet ownership, he finds out not only that she will likely be put to sleep if he returns her but also that other animals at the pet store face a similar fate when nobody chooses to adopt them. Cue the Duck. Chandler adopts him with the implication being that he was on death’s doorstep facing the prospect of being put to sleep had Chandler not intervened. After returning from the pet store, Chandler is watching Baywatch when Joey returns home and discovers that Chandler not only failed to return the Chick but also adopted the Duck. In explaining to Joey what fate lay before the Chick had they followed through with returning her, Chandler also reveals that they’ve named her Yasmine after Yasmine Bleeth, who just so happens to be one of the stars of the aforementioned Baywatch (Joey and Chandler’s favorite TV show). Funnily, the name of the Duck is not revealed in this episode but we do learn that he is a bad duck when Chandler puts him in timeout in the hallway later in the episode, telling him to think about what he did. Even though the Duck remains nameless, we do learn that he likes to take baths in the bathtub during the closing scene of the episode. We also learn during the closing scene that the Chick can’t swim.

And there you have it, class. You now know the inspiration for the hashtag #TheChickAndTheDuck. I’m guessing you’ve noticed that we’ve been using it to brand the blog series since it’s inception. So in case you’ve been wondering about it, congratulations…the mystery is now solved. While somewhat minor characters in the series, they’re unquestionably among the more memorable. More importantly, the fact that Joey and Chandler keep them as pets really gets at the heart of the show’s comedic spirit. It really speaks to the goofiness of their friendship. TEASER ALERT: We will be discussing an encounter in a later episode between Joey and Mr. Treeger (the building superintendent) that will add another layer of comedy gold to the saying, “The Chick and the Duck.” Having already delivered some enlightenment to one of the major themes of Friends 20/20, I feel very comfortable wrapping up a little bit early for the day. After all, I know many of you were up very late last night finishing your homework assignment because you procrastinated for almost two weeks. But hey, everyone turned in something so at least there won’t be any automatic zeros. Even rotten little Johnny turned his in, although at first glance I don’t think the vulgar drawing he did of me is likely to help his chances of finally advancing past this grade. They say third time’s a charm. Maybe not in Johnny’s case (heh heh). Anyway, good luck to everyone else. I know for many of you, this paper could make the difference between passing and failing (given that it’s worth 20 percent of the final grade). May the odds be forever in your favor. See you next week to hand out the results.

Recap in the Key of Phoebe – This is the one where Monica quits her job at the Moondance Diner to work as head chef in Pete’s restaurant, Phoebe gets her idea accepted by the diner to have the employees wear roller skates, Rachel asks Ross to help her get ready for a work event after getting injured by Monica on said roller skates, Ross misses a chance to be on the Discovery channel by helping Rachel get ready, Joey buys a buys a pet chick after seeing a news story about them, Chandler buys a pet duck to keep the pet chick company, and Monica finally feels a romantic spark for Pete in the same week that we first meet the chick and the duck.

Chan Man Quip of the Week – [The Setup] Chandler and Phoebe are hanging out at Chandler and Joey’s apartment when Joey walks in. After exchanging hellos, Joey says to Chandler, “I got you something! Open it! Open it!” He hands the box to Chandler and the latter responds, “okay” and opens the box. He continues, “It’s a chicken.” Gleaming, Joey confirms, “It’s cute, huh?” Sensing the implication that Joey brought it home as a pet, Phoebe interjects, “Whoa, whoa, whoa, you guys, do you know anything about chicks?” Chandler responds, “Fowl? No.” [The Knockout] He continues, “Women? Nooo.”