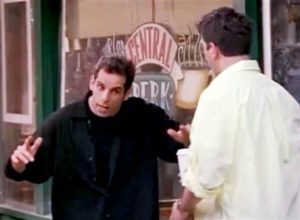 Friends S3:E22 – Okay, okay, everyone settle down and take your seats. Look, I know you’re all all very anxious to get your grades back on the homework assignment but we’re going to do that at the end of class. Come on…I wasn’t born yesterday. First, we’ll do today’s lesson. Then, you get your papers back. If we do it the other way around, many of you will be so preoccupied with your grades that you won’t absorb any of the information that I’m going to be presenting. What’s that, Susie? Where’s little Johnny? Well, I regret to inform everyone but I just spoke to his parents this morning and they informed me that Johnny don’t wanna go to school no mo’ (no mo’). It’s a shame too. Why? Nevermind that now, you’ll find out at the end of class. Okay, I know you’re all ready for grades so just bare with me while we power through the lesson first. In today’s episode, we’re gifted a pretty significant celebrity cameo. That’s right, boys and girls. When Rachel needs a date for Joey’s play in order to save face with Ross, she invites out a seemingly casual acquaintance named Tommy. And who, you might ask, plays Rachel’s new squeeze Tommy? Well, none other than Ben Stiller, of course. Stiller leaves quite a mark on the GOAT sitcom by playing a character whose bizarre behavior is more than memorable. We, the audience, quickly discover that Tommy has a huge anger management problem. He reveals himself in front of Ross by screaming at a couple who is sitting in their seats before Joey’s play. Among other things, Tommy calls the gentleman an “Idiot!” (Shout out to another classic sitcom, The Office because it’s hard to think about the word Idiot in pop culture terms without thinking about Dwight Schrute. God bless you, Dwight Schrute.) Unfortunately for Ross, he’s the only person there to witness the tirade and when he tells the gang about it…no one believes him. Tommy later turns his venom on Ross and again no one believes Ross that Tommy is crazy. Finally, the gang discovers Tommy’s crazy when they walk into Chandler and Joey’s apartment and find him tearing into the Chick and the Duck. Everybody knows that messing with the Chick and the Duck is a no-no (I mean, they are practically modern day folk heroes, after all) so, unsurprisingly, that was the end of Tommy on Friends. Okay, once again I know you’re all anxious to get your grades back, but a couple of housekeeping items to tie up regarding Ben Stiller’s cameo before we move on from today’s episode. First, there is another cameo coming up later this season that relates very intimately to Ben’s appearance on the show. I wanted to mention it so that you can keep your eyes and ears open over the next few weeks while finishing up the semester. Secondly, I wanted to mention another interesting connection between Stiller and David Schwimmer since Tommy spent most of his time on Friends interacting with Ross. Funnily enough, on the fourth season of Curb Your Enthusiasm, Larry David is cast to play Max Bialystock in The Producers on Broadway. During the season-long story arc, Ben Stiller is originally cast to play Leo Bloom alongside Larry David and is later replaced by David Schwimmer after Stiller quits to production because he can’t work with the Seinfeld co-creator anymore. So there you go. It’s funny how world’s collide in the sitcom universe, sometimes. Okay, class. Now for the moment you’ve all been waiting for. The reason Johnny’s parents said he doesn’t want to go to school no mo’ is because he’s afraid he’s going to get suspended for his drawing of me. It’s too bad. I think he would have been pleasantly surprised if he had showed up today. Will somebody volunteer to take Johnny’s paper and drawing home to him? Great, thanks Susie. I really hope seeing his results on this assignment might inspire him to get back in school. With that out of the way, are you ready, class? (Drum roll please.) Here are your grades…

Susie: You have a vivid imagination and an adventurous spirit. I really appreciated your stab at writing Friends fan fiction. The twist of bringing Mr. Heckles back from the dead was quite a pleasant surprise. Grade: A+

Timmy: When I suggested that you were free to write about the NCAA Championship game if you would like, you really took that to heart. Much like theLeftAhead Editor-In-Chief Ted James, you’re clearly passionate about basketball. In pop culture writing, however, while it’s perfectly reasonable to reference topical stories form the world of sports, we must be mindful that not everyone in our audience (readers who care about the classic sitcom Friends) also care about sports. That being the case, it was quite risky of you to devote the entirety of your piece to an analytic breakdown of the game. Nevertheless, I’m glad your favorite team, the North Carolina Tar Heels, took home the trophy. Grade: C

Sally: You did a solid job of giving a matter of fact report on the who, what, when, and where of Friends S3:E20. However, there were quite a few grammatical and spelling errors. You would be well served to go back and proof read your work next time. Grade: B-

Charlie: When, at first glance, I saw that you were writing a poem called The House of No Imagination, I was skeptical that such a deviation had much hope to pass muster. After reading your work, however, I’m quite impressed. Your meter is lovely and your metaphors have quite the Whitman-esque flare to them. Grade: A

Bonnie: I find it quite a stretch to believe that the 2017 version of Monica and Chandler would be supporters of Donald Trump and really believe that he’s going to Make America Great Again. Maybe Joey. Grade: D

Johnny: Last week, when I first saw your drawing of me, I was heartbroken. I thought, for sure, this was an indication that your work would not be up to snuff and would put you at risk of failing for the third year in a row. However, I decided (despite the vulgar drawing) to grade your writing with an open mind. In so doing, I was pleasantly surprised. I was quite impressed that you studied ahead from Friends S3:E20 to S3:E21 to incorporate the Chick and the Duck into your piece. And, I must say, despite the fact that you used me as a character that is viciously murdered and eaten, your work was quite creative and well written. It just goes to show that you have a great deal of potential, Johhnny. If you stay in school and decide to start working hard, I see big things in your future. Also, please take your drawing home with you. I never want to see or think about it ever again. Grade: B+ 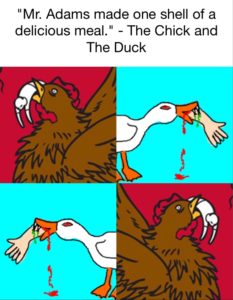 Recap in the Key of Phoebe – This is the one where Rachel asks a casual acquaintance named Tommy to be her date for Joey’s play in order to save face with Ross, Ross witnesses Tommy losing his temper at the play but can’t get any of his friends to believe him, Monica is over the moon that she has a boyfriend – not so much that it’s Pete – but really over the moon about having a boyfriend, Chandler convinces the Chick and the Duck that they’re not allowed to go to the theater, Phoebe misses Joey’s play because she’s on hold trying to use her warranty on a broken phone, Joey takes care of a drunken Kate after the play and finally has “the night” with her, and Ross is finally vindicated when the gang walks in on Tommy making a scene yelling at the Duck after the Chick pooped in his hand and he called Yasmine an Idiot!

Chan Man Quip of the Week – [The Setup] Monica, Rachel, Chandler and Ross are at Central Perk when Rachel informs everyone that Tommy is on the way to pick her up. This trigger Ross to get up the nerve to inform Rachel about Tommy’s crazy. Ross tells her, “Look. Look, I wasn’t going to say anything to you, but..(he pauses to thing). All right, I don’t think you should be seeing Tommy anymore.” Rachel sarcastically responds, “You don’t?” Ross continues, “No! The guy is mean. I mean really mean. I think you should stay away from him.” Unconvinced, Rachel continues with the sarcasm, “Umm, or, maybe, I should stay away from all men.” Undeterred, Ross keeps making his case, arguing, “No, it’s not just ‘cause I’m jealous. I mean I’m not, I’m not, I’m not jealous, okay? It’s… Look, the guy, he screamed, he actually screamed at this couple sitting in our seats.” [The Knockout]. Throwing Ross under the bus, Chandler interjects, “Yeah, and at the end of the play, he, he got up ya know, and he just started like, (Chandler starts mimicking clapping) banging his hands together!”