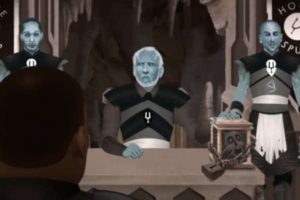 HUMBLE. – If the last six months have taught us anything, it’s that whining can take you a long way in Donald Trump’s America. Case in point, Memphis Grizzlies head coach David Fizdale. Congratulations, Fizzy. Whining has now earned you a playoff victory against the San Antonio Spurs. In the least surprising development of the 2017 playoffs, to date, Memphis defeated San Antonio 105-94 on Thursday night to close the series deficit to 2-1 and place a nice, fuzzy bow on the city’s obnoxious love affair with Fizdale’s childish, classless, and unwarranted post-Game 2 rant. The fact that Memphis seized on the manufactured momentum to grab an emotional “backs against the wall” victory was the predictable outcome to Thursday night’s contest. A Hollywood writers room couldn’t have scripted it any better. There was more suspense in Thursday’s new Game of Zones episode than there was in Spurs v. Grizzlies, Game 3. Note to Adam Silver: It’s foolishness like this that provides fuel for conspiracy fodder that the NBA is just as scripted as WWE. Of course the team whose coach made an ass out of himself and his city (err, I mean stood up for his players) after going down two games to zero gets the vomit-inducing (err, I mean heart-warming) desperation win after returning back home a cult hero. Having already collected Fizdale’s (err, I mean his players) $30K fine, why wouldn’t the NBA do everything in it’s power to make sure that the after-school special storyline of a coach who cares too much rallying his team to victory happens? That’s just good television. I know the NBA is trying to angle it’s way into the business of hosting award shows by putting on the NBA Awards this June but, come on. Usually in sports, awards are given for performance in competition, not for putting on an Oscar worthy performance for the media in the postgame press conference. But whatever, Fizzy is going to quickly learn that the award (a home playoff victory over the Spurs) which the NBA predictably bestowed on him for manufacturing a fake controversy is merely a participation trophy. Within the next week, David Fizdale is going to come to realize that he’s still light years away from knowing how to coach on a level that earns real hardware, namely Larry O’Brien trophies.

Indeed…with his Monday night stunt, David Fizdale has already played his hand for this series. What a weak hand he was holding to feel compelled to so haphazardly play his cards two games into the 2017 Playoffs. The beautiful thing about Coach Pop is that his counter to Fizdale’s loud, bombastic, desperate hand was quiet, stoic, and confident. Pop was so cool, calm, and collected on Thursday night, he almost made the Game of Zones White Walker caricature of him seem realistic. Pop’s ice cold YIN to Fizzy’s red hot YANG should provide startling evidence to every Memphis fan that their newly beloved coach is completely overmatched. The former (once again) did something that he’s done several times before and something that no other coach in the history of the NBA has ever also had the stones to do. He waved the white flag and gave his opponent the victory with more than enough time left to mount a comeback. Pop did this in order to demonstrate to his players that our energy and focus to start the second half were completely unacceptable for a playoff game. In other words, he prematurely conceded the battle to help teach his soldiers how to win the war. Only down four after a relatively evenly played first half, the Spur came out after halftime and started the third quarter like we’d just been in the locker room celebrating 4/20. We committed two turnovers while the Grizzlies scored five points to start the frame. Carelessness like we displayed in the opening minute of the third is a telltale sign of littering and… so Pop rushed in like Jeff Sessions visiting Colorado and shut the whole thing down. He pulled Kawhi Leonard, LaMarcus Aldridge, Tony Parker, Danny Green, and Dwayne Dedmond one minute into the third quarter and replaced them with Pau Gasol, Patty Mills, David Lee, Kyle Anderson, and Jonathan Simmons because his starters had allowed Memphis to extend the lead from four to nine. There is not another NBA coach (current or former) that would have had the nerve to do that in a playoff game. In case you haven’t noticed over these past 19 years, Gregg Popovich is playing chess. Unfortunately for Grizzlies fans, as much as they may have loved David Fizdale’s fiery rant, such a weak hand is evidence that David Fizdale is playing checkers. On second thought, Pop hasn’t even begun playing chess yet. This is still the first week of the first round, after all. Gregg Popovich is playing checkers like it’s chess. David Fizdale, having gone all-in on his Monday night stunt, has already demonstrated he’s playing checkers like it’s Tic-tac-toe.

Here’s the biggest misnomer about Game 3. The narrative is that Fizzy rallied his team to completely outplay the Spurs on Thursday night. That’s true…but only if you reduce basketball to a free throw shooting contest. Fair warning: what I’m about to say is going to blow your mind. As much credit as the Grizzlies (and Fizzy in particular) were given for their Game 3 performance (and even despite Pop conceding the game early to teach our players a lesson), in actuality the Grizzlies didn’t beat us in Game 3…we beat ourselves. The Spur were a horrendous 16-28 from the free throw line. Yep. We left 12 points on the board at the charity stripe in a game that we lost by 11. If we had made our free throws, which we’re fully capable of doing (keep in mind, in Game 2, three nights earlier, we demonstrated it, going a ridiculous 31-32 from the line), despite everything else, we would have been right there at the end of the game with a chance to win. In all actuality, Memphis should be counting their lucky stars to have won Game 3. Had we shot that same percentage again on Thursday as we did on Monday, all Coach Fizdale’s self-aggrandizing version of the Win One for the Gipper speech would’ve been able to muster is a shot for the Grizzlies to win Game 3 in overtime. It’s kind of sad to think about he game in this context as a Fizzy-frenzied Grizzlies fan given that Pop threw in the towel with a quarter left to play. Also, knowing Pop, had the Spurs hit free throws in Game 3 allowing the bench to get the game to overtime, our plays checkers like chess coach would have awarded the bench players the overtime minutes and given them a chance to steal the game. By the way, Memphis does not have a good track record against the Spurs in overtime playoff games (having lost not one but two of them) in the 2013 Western Conference Finals. Don’t get me wrong, Memphis fans should be thrilled to have finally snapped a ten game playoff losing streak to San Antonio. But being thrilled about it because you’re buying the “Fizdale coached ’em up to dominate the game” narrative is delusional. Given all of this, you’re probably not surprised that I am extremely confident in the #BlackAndSilver‘s chances to win Game 4 tonight in the FedExForum. By the way, the player of the game on Thursday was LaMarcus Aldridge. L.A. logged 16 points, 11 rebounds, 2 assists, and a block in 30 Game 3 minutes. We need him to keep up that type of production in Game 4. Combine it with a bounce back game from the backcourt tandem of Tony Parker and Maun Ginobili (who were both held scoreless on Thursday for the first time in the same playoff game in their illustrious careers playing together) as well as the type of dominance we’ve come to expect from Kawhi Leonard (aka the best player in the world) and the Spurs will have a fantastic shot to get the series back on track this evening. Gregg Popovich has played enough games of both checker and chess to not only know the difference between the two, but to also know that if we get back to playing focused, determined Spurs basketball in Game 4…we’re going to be just fine. No need to panic yet. We just need our heroes to be heroes.