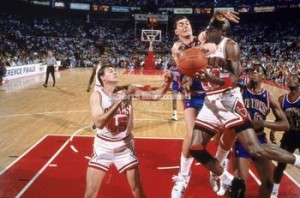 Once It Hits Your Lips – And the Tony goes to…Tony Allen hit the floor, holding his head, writhing in pain. If you had missed the play and you had just seen the aftermath you would have thought that Manu Ginobili had grabbed Allen out of mid air, body slammed him to the ground, bent down and karate chopped him in the head, and then spit in his face for good measure. Sources tell me that after watching the latest incarnation of the business of basketball receiving official protection against the manifestation of spirited competition, a portal through which gladiators used to be willing to sacrifice a limb in order to earn the distinguished honor of a trip to the NBA Finals, Bill Laimbeer immediately changed the channel to WWE Royal Rumble in an effort to find more authentic programming. Faking an injury that did not occur to bate the refs into a flagrant foul is not in the character of champions. Only Tony Allen knows for sure how far he pushed that acting performance, but the fact that three Memphis-based personal injury lawyers have already solicited Allen for an endorsement deal since Tuesday night doesn’t bode well for his credibility.

The player of the game was Tim Duncan. He saved the Spurs from the type of catastrophe that derailed the 2004, 2006, and 2008 title contending Spurs by dominating the overtime period. Had San Antonio lost Game 2 because Memphis was able to outplay us from opening tip to final buzzer, it would not have been the end of the world. We could have regrouped, looked at film, and come back with a focused performance in Game 3 like we did against Golden State under the same circumstances. However, had San Antonio lost Game 2 because of the shenanigans of Tony Allen and the apparent passion for Broadway theater that Bill Spooner, Scott Foster, and Bill Kennedy hold in common, that could have proven disastrous. The Memphis Grizzlies made it quite clear in their fourth quarter comeback Tuesday night that they are a tough minded, determined basketball team. They are good enough to win this series. Had the Spurs allowed a game to slip through our fingers that, by all intents and purposes, we had in the bag because of a couple of freak plays in the final minutes; there is no guarantee that we would have had the ability to refocus from that disappointment to win three out of the next five games. Don’t get me wrong, I know we could have. But I’m extremely thankful that we don’t have to put that scenario to the test. Thankfully instead, the #BlackAndSilver defeated the Memphis Grizzlies 93-89 in overtime on Tuesday which puts us in the same scenario as last year. The Spurs are up 2-0 in the Western Conference Finals with a chance for redemption. Second chances serve as spectacular opportunities. They are the purest type of opportunity; the kind that comes to those who are willing to put in the work to overcome adversity. You can’t fake your way to the promised land. The Spurs face the ultimate opportunity to body slam the adversity they experienced last year and punch their ticket to the NBA Finals this holiday weekend in Memphis, Tennessee. They won’t punch that ticket through their ability to sell fouls. They won’t punch that ticket through their ability to make shots. They will punch that ticket by having an insurmountable desire to win. And they will punch that ticket with their hustle and flow.