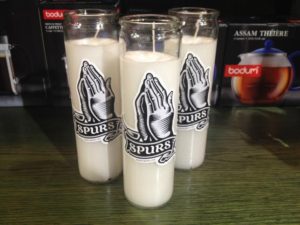 Something in the Way – It’s funny what a difference 48 hours can make for a tribe of true believers who are in the middle of a noble quest to recapture basketball nirvana. For two weeks, we had been on top of the world. Invincible. Food never tasted better. The sun never shined brighter. Ordinary, day-to-day problems didn’t seem so bad. How could they if the Spurs are undefeated in the playoffs? Life was good. Until all of a sudden, it wasn’t. On Monday night, we had a very hard time putting a big orange ball through the thing that a certain Canadian born former candidate for the presidency of the United States apparently calls a basketball ring. (Ted Cruz aka Mr. Basketball U.S.A was busTED after using the phrase while trying to pander to voters in the Hoosier State last week. James Naismith, fellow Canadian and inventor of basketball, must’ve been rolling over in his grave. But whatever, I guess Senator Cruz is back to being my native state of Texas’ problem now that he’s suspended his campaign. My condolences to my friends and family who are still residing in the Lone Star State but also…so long, Teddy.) And as a result now, for the second straight playoff series, we’ve unfortunately given away our second home game after dominating the first (San Antonio lost Game 4 at home to the Clippers 114-105 last year after destroying them 100-73 in Game 3). On Monday night, the Oklahoma City Thunder came into the AT&T Center (after getting humiliated in Game 1 in the Alamo City 124-92) and became only the second team all season to defeat the San Antonio Spurs in our building (Golden State won 92-86 in SA on April 10th). After leading most of the night, OKC hung on to steal home court advantage away from the good guys (at least temporarily) winning 98-97 after a wild (and controversial) final play of the game.

Before we get into the bizarre final sequence, I want to make two unrelated observations. Observation #1: The predictable letdown from a fantastic Game 1 shooting performance, of course, reared its ugly head in Game 2. The Spurs shot a lackluster 42.6 percent from the floor and 26.1 percent from three in Game 2. Most notably, Tim Duncan was 1-8, Patty Mills was 2-9, and Kawhi Leonard was 7-18 from the field. If you remove player of the game (for the third consecutive game) LaMarcus Aldridge’s 15-21 shooting (71 percent) and 41 points from the equation, the rest of the Spurs shot a combined 25-73 (34.2 percent) and put a meager 56 points up on the scoreboard. When you look at how poorly we shot the basketball overall as a team (I mean, we missed 12 of our first 13 shots for Pete’s sake), you start wondering how we were even in the game (oh, that’s right…Aldridge). Even with LA going bananas for the second consecutive game, since the two OKC superstars responded how superstars are supposed to respond to an embarrassing loss and lit us up for 57 points on 22-44 shooting (50 percent), we could not afford for Leonard to have a poor performance if we hoped to offset the fire power of Durant and Westbrook. Unfortunately, Kawhi had his worst game of the 2016 playoffs (perhaps his worst game of the 2015-16 season) scoring a pedestrian 14 points. Not to add insult to injury, but Kawhi also missed two free throws in a game that the Spurs lost by one point. Observation #2: The Thunder out-rebounded the Spurs 48-37 and we gave up an unforgivable 17 rebounds to Steven Adams. More than blown calls or even poor shooting, second chance points killed the Spurs. It seemed like every time we were getting some momentum and moving into position to go on the run that would give us the lead, OKC was able to secure a backbreaking offensive rebound that led to a momentum killing basket. Adams in particular was a monster, not only on the boards but in setting a physicality tone for the game. What the rebound disparity and our opponent’s physicality tells me is that the Oklahoma City Thunder played harder and wanted the game more than we did. On second thought, I don’t need to look at the rebounding totals in the box score to make this observation. It was evident with what my own two eyes were seeing as I watched the game on Monday night. OKC played with a noticeably greater sense of urgency. Between the focused offensive effort of Durant and Westbrook and the defensive intensity of Adams and Serge Ibaka (even if they couldn’t slow down Aldridge, they fought him for 48 minutes), the Thunder were the better team on this particular night and they deserved to win.

Okay, now about the bizarre final play of the game. It’s always frustrating when the referees screw something up in a way that alters the outcome of a game, especially a playoff game. Had the referees either called the foul on Dion Waiters for elbowing Manu Ginobili before inbounding the ball or if they had called a foul on Serge Ibaka for holding LaMarcus’ jersey as he attempted to put back Patty Mills’ air ball, sure, we might have escaped with a lucky win. Sure, Spurs fans wouldn’t have had to spend the past four days tormented by the “what ifs” of all the things that could have gone differently to result in that win (and of course a painful loss at the buzzer had to happen in a game that preceded an unusually long break in the series providing us more time to stew in our misery). So sure, we wouldn’t have had to spend this extended time off reliving all of the pain and agony of .4, or the foul on Dirk, or the Brent Barry non-foul, or the Ray Allen shot, or last year’s Chris Paul dagger. It’s tempting to think that this bizarre finish could become another tragic Spurs playoff moment to add to that list. I continue to feel really confident, to the contrary, that this will instead be the wake up call that brings us together as a team and sharpens our resolve. I see this bizarre Game 2 ending as having the same feeling as the Stephon Marbury buzzer beater in 2003 or the Vince Carter buzzer beater in 2014. The reason I see what will now infamously be known as the unfortunate Waiters incident this way is because it happened early in the series just like the Marbury and Carter game winners. All of the moments on the list of all-time Spurs playoff tear jerkers happened late in those series. Because this stroke of bad luck happened early in this series, I see it as the teachable moment for the 2016 remixed version of the Spurs reminding us that we cannot have bad nights in the playoffs. We have to be ready to bring it every single time we enter the arena. I am supremely confident that the #BlackAndSilver will take that lesson to heart, play Spurs basketball and leave Chesapeake Energy tonight after snatching home court advantage and control of the series back with a convincing victory. I expect Kawhi Leonard, in particular, to come back with a ferocious performance on both ends of the court. If we can get that and also keep LaMarcus red hot, I think we will be okay (even in an environment as hostile as Oklahoma City). Despite all of the heartache and nightmares the Game 2 loss has engendered for Spurs die hards, we must continue to remember that this remixed Spurs is one of the greatest basketball teams ever assembled. Teams that set a franchise record for wins don’t come along every year, especially for five time champions. We have the talent, experience, and the depth to climb out of the hole we’ve dug for ourselves. It’s time to leave that one behind and come together in pursuit of that which we know is possible. In other words, tonight is a night to light your Spurs candles if you’ve got ’em. They don’t call us true believers for nothing. Tonight, we’ve got to keep the faith. With all due respect to the fantastic talent of Kevin Durant and Russell Westbrook on the other side of the court, we did not embark on a journey that’s destination is a second round playoff exit. Rather, as stated previously, we have embarked on a noble quest to recapture basketball nirvana. And this is the point of no return.