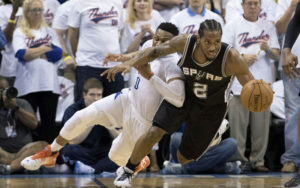 Point of No Return – Well, that was not for the faint of heart. What a dogfight. I think it’s safe to say we can add this one to the list of legendary playoff street brawls on the road that the Tim Duncan led Spurs always seem to find ourselves in year after year. Thankfully, somehow and someway, San Antonio escaped Chesapeake Energy Arena (one of the most hostile environments in the NBA) on Friday night with a narrow 100-96 victory over the Oklahoma City Thunder. Oh, and by the way, in doing so we recaptured the ever important home court advantage that we had surrendered during Game 2’s chaos. It may go without saying, but I’m going to say it anyway. This was a huge victory. It was absolutely critical against a team as talented as the Thunder that, after coughing away Game 2, the Spurs immediately reasserted our force of will and put the series advantage back in our favor. Having now secured this hard fought Game 3 win, we’ve hopefully demonstrated psychologically that Game 2 was an aberration (a momentary stumble) rather than the first cracks in a dam that is there for the breaking. Can you imagine the amount of swagger that the Thunder would have been bringing into the remainder of this series if they had been able to absorb Friday’s counter punch and still figured out a way to win Game 3? We have a great deal of first hand playoff experience to remind us that swagger is a major ingredient in what makes this OKC squad a dangerous animal. Ever since the Thunder were first able to break through against San Antonio in Game 3 of the 2012 Western Conference Finals (defeating us 102-82 in OKC), we haven’t seemed to have an answer for the lethal cocktail of talent and confidence Oklahoma City is able to serve up any time their swagger hits peak levels. That is why I can’t emphasize enough how important it is that (when it was all said and done Friday night) we were able to capitalize on securing a victory that we spent a great deal of energy putting ourselves in a position to secure. If by doing so we’ve suppressed even a small amount of the swagger OKC has the potential for generating, we have done ourselves a huge favor moving forward in this series.

Even though the Spurs were playing from ahead most of the night, Friday’s game certainly made sure that the faith of true believer Spurs fans was tested from start to finish. There was one thing in particular that was really testing my resolve throughout much of the night. Early on in the game, I noticed a disturbing trend that was occurring. A disturbing trend that, over the years, the Spurs have too frequently been snake bitten by in big playoff games (especially on the road). This trend, which was on display for much of the game, is one of the easiest ways for a team to snatch defeat from the claws of victory. What trend and I speaking of? Missed free throws. For much of the night, it felt like the Spurs were consistently stepping up to the free throw line and splitting each pair. Not taking advantage of free throw opportunities on the road in a tight playoff game is the equivalent of playing chicken with an oncoming train. It doesn’t matter how skilled you believe you are at judging speed and distance, by not creating the biggest separation possible between you and the train, you are flirting with disaster. Over these past 27 seasons rooting for the Spurs in the playoffs, I’ve seen it more times than I care to count: missed free throws staring me in the face as the explanation for why we lost a close playoff game. And, sure enough, missed free throws was the thing that was on my mind through the first three and a half quarters of Game 3, challenging my faith as a true believer. Through those first three quarters of play, San Antonio was a combined 13-22 from the free throw line (shooting 59 percent). As a result, we carried a measly three point lead into the final frame. Had we simply just shot slightly better than 75 percent at the free throw line through the first three quarters, we could have carried a seven point advantage into the fourth. That could have made a huge difference. Indeed, when Russell Westbrook hit a ridiculous step back three pointer with 7:11 left in the game to give OKC an 81-77 four point lead, the nine missed free throws were all I could think about. I won’t lie (because of all of our past experience with poor free throw shooting during close playoff losses), in the internal struggle between faith and doubt which had been taking place in the pit of my stomach throughout the game; doubt wasn’t necessarily losing in that moment when the Spurs went down four points halfway through the fourth quarter. Then, after absorbing OKCs attempt at a knock out blow, thankfully we were able to maintain our composure, hang in the game, and (for whatever reason, perhaps all of the Spurs candles that were lighting up living rooms all across South Texas had something to do with it) miraculously we were able to flip a switch and get in rhythm at the foul line down the stretch. After Westbrook’s dagger three, the Spurs shot 11-12 at the charity stipe in the guts of Friday’s critical ball game. The 92 percent fourth quarter free throw shooting was capped by four cold as ice clutch free throws (two by Tony Parker and two by Kawhi Leonard) in the final 18 seconds of the game to seal the victory. If you need reassurance that the Spurs have what it takes to compete for this year’s trophy, you should take heart in our precision fourth quarter free throw shooting in Game 3. Championship caliber teams figure out a way to ignore the pressure of the playoffs and the pandemonium of the opposing crowd and make free throws down the stretch of tight games in hostile environments on the road. While it’s only a one game sample size, on Friday night the 2016 remixed Spurs showed that we are capable of passing that litmus test.

Naming a player of the game for Game 3 was an incredibly hard decision. Kawhi Leonard was every bit the beast on both ends of the court that I predicted he would be. He was spectacular. Leonard filled up the stat sheet like someone who just got to the all-you-can-eat buffet 10 minutes before closing time. Kawhi’s stat line: 31 points (9-17 from the field, 3-4 from three, 10-14 from the line), 11 rebounds (including a game-saving rebound of the offensive variety), 3 assists, 1 steal, and 1 block. Yes indeed, it’s safe to say that The Klaw rebounded excellently from his poor Game 2 performance. The offensive rebound that Kawhi secured up by two points with 23 seconds left in the game was the biggest play of the Spurs season thus far. It was a joy to watch the sheer determination in his eyes as he scurried into rebounding position while LaMarcus rose to shoot a jump shot and then went up over André Roberson and Serge Ibaka after LaMarcus missed and just got the damn ball. Sounds simple but in actuality it was the manifestation of a will to win that only champions seem to have the internal fortitude to muster in those situations. Spectacular. Even though there is no doubt that Kawhi made the play of the game, I’m giving player of the game honors to Tony Parker. Tony stepped up huge in Game 3 and showed glimpses of the dominant offensive weapon that he’s been for us in years past. Tony’s stat line: 19 points (7-14 from the field, 3-6 from three), 8 rebounds (where did that come from?), and 5 assists. One of the adjustments OKC had made in the series after getting annihilated by both LaMarcus and Kawhi in Game 1 is to play off of Tony and allow his man to help harass our two superstars by lingering nearer the places in the post that LaMarcus and Kawhi like to operate. The adjustment paid off (at least against Kawhi) in Game 2 as the Thunder’s perimeter defenders were able to give each other the help needed to disrupt Kawhi into having a bad game. On Friday night, however, Tony Parker made them pay dearly for daring him to beat them over the top. Shooting 50 percent from the field on the night, Tony hit critical shot after critical shot all game long to punish the Thunder for the tactical adjustment. In one comical second half example of the indifference OKC’s defenders were demonstrating towards Tony as a scoring threat, he brought the ball down on the break and watched as four Thunder defenders all pointed at him while he dribbled past the three point line. Since none of the four defenders that were pointing actually jumped out to guard him, Tony casually drained a 20 footer. Tony’s ability to relentlessly punish the Thunder by draining the shots that OKC’s game plan had calculated they could live with him taking is the reason that Tony earned player of the game honors over Kawhi. Bottom line, the Spurs would not have won the game if Tony hadn’t made shots. Hopefully he can remain aggressive for the duration of this series because we’re going to continue to need his offense.

After Friday night’s nail biter, one would hope that we could get a couple of days to catch our breath. Unfortunately there’s no rest for the weary as Round Two is now coming at us fast and furiously every other day. Tonight, the #BlackAndSilver have an excellent opportunity to replicate the concentration, determination, and team play that resulted in a Game 3 road victory. It won’t be easy. The Thunder are now a wounded animal who will be treating tonight’s game like an elimination game. Durant and Westbrook are going to try to establish themselves early and will keep attacking us all night long. There is no question that tonight’s game will be decided by our defensive intensity. Are we going to be able to maintain the concentration and maintain the defensive determination of two nights ago when we were the desperate team? If we are even the least bit satisfied with reclaiming home court advantage in Game 3 and let up even a little bit on the defensive side of the ball, we will get eaten alive and find ourselves heading home in a 2-2 series. Yo, check it tho. If, instead, the Spurs bring the Back to Black championship level defense that we are capable of tonight and leave every ounce of it out there on the floor, we will be victorious in Game 4. Check the rhime.