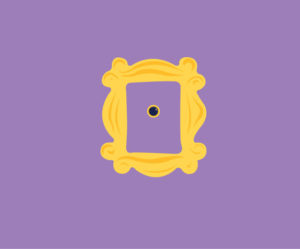 Friends S2:E22 – Hola, damas y caballeros. ¿Qué hay de nuevo? Well, I’m back in beautiful Colorado. Strike that. I’m back in Colorado. When it’s May and we’re still getting winter storms that include snow flurries, there’s a few other adjectives I would use to describe my state of residence other than beautiful. But that’s neither here nor there. I’m glad to be back and rested as you and I head into the last leg of our Season Two journey together. It’s hard to believe, but we are now seven eights of the way through our second installment of Friends 20/20. Including today, we have three more posts and two more weeks before we part ways for the summer. If you all know me (and I think you do), you’ve probably guessed that I’m counting the days, hours, minutes until the moment on May 16th when I will press publish on the final post of the season and then vanish from theLeftAhead offices for eighteen weeks. Will I resurface somewhere tropical? Perhaps in Europe? Who knows? That’s to be determined. The important detail for now is that it’s only two weeks away. Hurray! But enough about my aversion to the American work ethic and the 40 hours a week, 48 weeks a year required to demonstrate one’s commitment to it. Despite the tremendous strides I’ve made over these past eighteen months to try to be more professional and take the 236 post assignment that I volunteered for more seriously, you know that at heart, I’m a slacker. In fact, not only do you know I’m a slacker but I have no shame in admitting to being a slacker and reminding my editor on a regular basis that I’m a slacker as well. There’s no secrets among Friends here.

Did someone say, “there’s no secrets among Friends? In today’s episode the gang throws Rachel a surprise party for her birthday and despite their best efforts to keep it a secret, she admits after the fact to having prior knowledge of the festivities. What Rachel didn’t know however, was that both of her parents were going to show up despite the fact that they had not been able to be in the same room as each other without arguing since filing for divorce. This creates a hilarious scene where, in order to keep Rachel’s parents separated, the gang tells Rachel’s father that Monica and Rachel’s apartment is the staging area for the party and that Joey and Chandler’s apartment is the real location of the party. They then proceed to throw two parties simultaneously in each apartment and do everything in their power to keep Rachel’s mom in the girl’s apartment and Rachel’s dad in the guy’s apartment. Taking the brunt of the embarrassment that was sure to result, Ross (aka Mr. Rachel) accidentally convinces Rachel’s mom that he is just like Rachel’s dad as he periodically jumps from apartment to apartment to fetch things for Rachel’s dad. In one hilarious moment, Ross is actually confronted by Dr. Green in the hall as he walks out of the girl’s apartment wearing Dr. Green’s glasses and holding one of Dr. Green’s cigarettes in his lips. This is one brick in the wall, so to speak, in building the series long unbearable awkwardness between Rachel’s father and her on again, off again Paleontologist. Ah man, you’ve got to love the palpable tension between those two. Speaking of palpable tension, it’s nearing 5:00 pm and my editor wanted this post by 4:00 pm. You may or may not know that there’s a San Antonio Spurs playoff game later tonight. You may or may not further know that it is a bad idea to keep Ted James waiting on an afternoon preceding a Spurs playoff game. I can feel his glare burring into the back of my head from across the room as we speak. For my own safety, I better wrap this up. So if you remember anything from this post mis amigos, remember this. When spending time with the parents of your significant other, always bring your own reading spectacles and cigarettes. Also never submit a piece late to your editor on game day unless that piece ends in the immortal words, “Go Spurs Go!”

Recap in the Key of Phoebe – This is the one where Rachel finds out her parents are getting divorced, Monica hosts a surprise party for Rachel’s birthday, Joey and Chandler host a second surprise party for Rachel’s birthday next door in order to keep Rachel’s mom and dad in separate places, Phoebe sneaks guests out of Monica’s traditional and stuffy party and over to Joey and Chandler’s wild and crazy party, Ross accidentally makes Rachel’s mom believe he is exactly like Rachel’s dad while bouncing back and forth between parties, and the gang is able to keep Rachel’s birthday from being ruined by her parent’s fighting through the brilliant creation of the staging area.

Chan Man Quip of the Week – [The Setup] The gang sans Rachel is hanging out having lunch at the diner that Monica works at. Monica is on the clock and wearing her 1950’s themed blonde wig and huge fake boobs while she is standing behind the counter chatting with her friends about Rachel’s birthday. She notices that Joey is leering at her fake boobs. She stares him down and insists, “Joey they’re not real.” Startled (as if from a trance) Joey mumbles, “Huh, what.” Monica continues, “I start miles beneath the surface of these things, okay. They’re fake.” She grabs her own chest and starts squeezing the fake breasts, narrating, “See? Honk. Honk.” [The Knockout] Interjecting himself into the conversation, Chandler observes, “Wow, it’s like porno for clowns.”