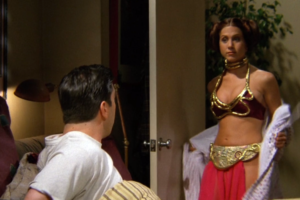 Friends S3:E1 – But oh how it feels so real lying here with no one near. Only you and you can hear me when I say softly…(pause)…slowly…(wait for it)…hold me close young Tony Danza. Count the headlights on the highway. YO! YO! YO! How the heck are you, my BFGFF’s (Big Freindly Giant Friends Fans)? Can you believe it? After a long and relaxing summer break, we’re finally back for the third installment of Friends 20/20. I can honestly say that I’ve really missed you guys. Sure, full disclosure, I had an incredible summer drifting from beach to beach; relaxing and soaking in rays for weeks on end with umbrella drinks never more than an arm’s length away. It may be hard to believe, but alas…like all good things in life, my good people, eventually all of that relaxation played its course. I know, I know, poor pampered me. But it’s true. Eventually I grew tired of endless pina coladas and bonfires, so I returned stateside a few weeks early (right before Labor Day weekend). I quickly realized, however, that foregoing a couple of extra weeks of moon parties was a mistake because over the past couple of weeks, I’ve been bored out of my gourd waiting for my beloved Mission: Impossible assignment to resume today. In fact, there are rumors swirling around the theLeftAhead office that I was so bored these past couple of weeks, I even resorted to binge watching episodes of Saved By the Bell on Netflix to pass the time. (Oh the humanity!) Those rumors will neither be confirmed or denied. Of course, soon after my return, Ted James (my editor) quickly pointed out that one way for me to pass the time would be for me to contribute some political commentary to our Election 2016 coverage (he’s constantly reminding me that I was a Poli Sci major, afterall) or to finally follow through on my promise to write some non-Friends related pop culture content for the site. But sadly, I could not be convinced that 1,500 words on the second season of Mr. Robot was a better use of my time than reliving (for the dozenth time) the teen angst torture Zack Morris experienced while trying to outduel A.C. Slater for the affection of one Kelly Kapowski. Sure, things like keeping my word and being a team player at work are important to me but let’s be reasonable…time reserved for binge watching SBTB is an important part of any healthy work-life balance. I mean, it’s not as if I was blowing off an opportunity to add some much needed content to theLeftAhead in order to binge watch Good Morning, Miss Bliss or Saved by the Bell: The College Years. Let’s keep it ?. I was mainlining the hardest of the hardcore pique SBTB episodes directly into my bloodstream. You know, episodes like the one where Jessie Spano develops a pill popping addiction, or the one where Zack deals with the pitfalls of fame as the lead singer of Zack Attack, or the one where Screech stabs someone (perhaps I’m misremembering that last one). Anyway, as I was saying…reliving the quintessential years of SBTB is an important part of a healthy work-life balance. Of course, when Mr. James caught wind of the rumor that I was allegedly blowing off his suggestion to write a post about Mr. Robot in order to binge watch Saved by the Bell, he proposed that I write a post about Saved by the Bell instead since I’m watching it anyway. As he put it, “if you’re hellbent on pissing away your last two Friendless weeks binging old Saved by the Bell episodes, the least you can do is let the site get some mileage out of your sloth.” He’s such a dick.

But enough about me. We’ve got a brand spanking new 20 year old episode of Friends to lightly touch upon (I mean, diligently dissect). When last we left our pals, Chandler had just gotten back together with Janice Litman [née Hosenstein] (his married ex-girlfriend) and Monica had just broken up with Magnum, P.I. (I mean Dr. Richard Burke). The story resumes seemingly just a few weeks later as we find that Chandler and Janice are still happily together and we also find that Monica is still in mourning over her and Richard’s break up. These story lines continue playing out for the duration of the Season Three premiere but the most noteworthy anecdote from this week’s episode comes when Ross has quite a revelation (when Rachel informs him of that women share with each other very intimate details about their romantic relationships) and decides to try sharing with Chandler. At first, it seems to be a good idea as Chandler quickly relates when Ross shares with him his Princess Leia fantasy. Things go south rather quickly, however, when Chandler subsequently shares that he pictures his own mother in his head sometimes while having sex (my man’s got issues, yo). Hilarity ensues when the uncovering of this disturbing information later causes Ross to accidentally picture his own mom while trying to play out his Princess Leia fantasy with Rachel. Joey steals the show, however, after returning home from Joey and Janices Day of Fun when he tells Chandler that he and Janice had run into Ross at Central Perk and Ross had subsequently relayed what Chandler had shared with him. Joey consoles Chandler by telling him it happens to him too. When Chandler, feeling reassured, seeks confirmation by asking, “Really?” Joey responds, “Oh yeah. I always picture your mom while I’m having sex.” Burn. ?????

Speaking of burn. I’ve got burnt orange on my mind. No, not burnt orange like the Texas Longhorns (who blew a game to Cal that they should have won on Saturday). Yes, burnt orange like Donald Trump’s hair and skin. You see where I’m going with this, right? I’d be remiss if I didn’t follow up on commentary from our Season Two finale by giving my two cents regarding the current state of Election 2016 during our Season Three premiere. If you are a loyal reader of the blog series, you already to know that I was all in on feeling the bern last spring. Therefore, as you can probably guess, I’m sad to report that there are not chicks and ducks in the world again because Bernie Sanders is unfortunately not well on his way to the White House. Instead we have a General Election match up of Secretary Hillary Clinton vs. Megalomaniac Donald Trump. Damn, this sucks. Considering that this not only sucks but really, really sucks…I don’t have a great deal to say at this point. (I’ll save my next extended political rant for closer to the election.) Having said that I don’t have a great deal to say, I will say this visa vie the following…as the race stands today, I’m planning to vote for Hillary Clinton (I am not, however, planning to endorse her candidacy). I will not attempt to persuade you to vote for or against Mrs. Clinton during our time together over the coming weeks. You won’t get the, you must vote for Secretary Clinton because she is the lesser of two evils argument here. I personally have mixed feelings about whether a vote for Jill Stein is productive or counter-productive (we can explore this more in the forthcoming rant that I teased earlier). So no, I do not know if the you must vote for Secretary Clinton because she is the lesser of two evils argument boasts a sound moral foundation, but I do know one thing. No matter what you choose to do in this Saved by the Bell: The College Years crap-fest dumpster fire that is the 2016 General Election, please think very carefully about making sure that whatever you choose to do does not contribute to the election of Donald John Trump. If you need a reminder of why that would be such a future-jeopardizing disaster, just watch this. Finally (if you will indulge me), hey Ted James. Do you like apples? I just gave you exactly what you’ve been bugging me for these past two weeks (some Saved by the Bell pop culture content as well as some Election 2016 content) and I did it all without having to lift one extra finger or write one extra word outside of my contractual obligation. How you like dem apples? (Mic drop.) Adams out.

Recap in the Key of Phoebe – This is the one where Monica is still mourning her and Richard’s break up, Ross shares his Star Wars fantasy with Rachel, Joey tries to get over his dislike of Janice so he can spend more time with Chandler, Phoebe attempts to guide Monica in medication to help her get over Richard, Chandler shares with Ross a disturbing glimpse into his sex life, and Ross may as well have been singing “Hold Me Close Young Tony Danza” in bed with Rachel because he can’t stop picturing Rachel as his mother when she dresses up as Princess Leia to fulfill his fantasy.

Chan Man Quip of the Week – [The Setup] Rachel, Ross, Phoebe, and Chandler are hanging out at Central Perk talking about how Joey hates Janice when Rachel notices that Monica is outside visibly distraught and holding a package from the Post Office. Monica seems to be simultaneously crying and speaking rapidly at her friends through the coffee shop’s window. Indicating to everyone else to look outside, Rachel exclaims, “Oh my god.” [The Knockout] Relishing the opportunity to crush a pitch that’s hanging over the plate out of the park, Chandler observes, “Well look everybody, it’s Weepy. The mime who cares too much.”

Headline Image Source: She Does the City