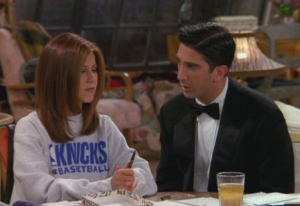 Friends S3:E2 – Howdy? How goes it out there for all of you on this beautiful autumn Monday, my fantastic Mercedes Friends? Personally, I have a lot of balls in the air today. For starters, today is a travel day for me as I will be catching the red-eye out to the West Coast (Portlandia to be exact). Secondly, tonight is the first Presidential Debate between Secretary Hillary Clinton and Career Con Man Donald Trump. While this means that our offices here at theLeftAhead will be a zoo all day (making it harder for me to focus on banging out this post), I will actually miss watching the debate live because of my aforementioned trip. Since I’ll be on a plane, I’ll be observing #BannedBooksWeek during the debate and, given the toxic state of our political discourse, I’ll be all the better for it. But that’s neither here nor there. My next ball in the air is that I’m facing yet another disciplinary meeting which is scheduled for later today with my editor, Ted James (don’t worry, I’ve requested representation from my union rep). As you have probably guessed, this meeting is a result of the unfortunate allegation that I called Mr. James “a dick” in last week’s post (good luck coming up with concrete proof, Ted). I’m actually looking forward to this meeting to see how Frank “Fish Scale” Gambini (my Union Rep) smacks this allegation down to save me from yet another suspension. Lastly, and to top it all off, there’s this damned Friends post to write. If you know me, you know that I would gladly mail in my work assignment today, if possible. Unfortunately, it wouldn’t be fair to you (the reader) because today we are covering one of the great Friends episodes of all time (and must therefore provide the type of solid analyses worthy of a classic episode). So, since I won’t be mailing in today’s post and given everything else that I’m dealing with, when I woke up this morning and came to the realization of what’s in front of me on this mad-busy Monday…I channeled my inner-Monica and screamed out, “Nooooooooooooooooo!!!!!!”

Okay, I feel a little better after getting out that Monica scream. Whew. I’m now in the right frame of mind to do this thang so let’s dive right into today’s episode, shall we? There is so much classic material to comb through with this one. Set in Monica and Rachel’s living room (for the duration of the episode except for the scene during the final credits), we find our trusty Friends writer’s room channeling the single set narrative construction popularized by sister show Seinfeld with their infamous The Chinese Restaurant episode. Friends writers were clearly doing their homework studying Larry David and company because The One Where No One is Ready creates brilliant rhythm by moving our beloved six mainstays in and out of the scene with the camera fixated on Monica and Rachel’s living space. Oh my, oh my…what an episode. Where to begin? Let’s start with Monica “going over to the bad place” after hearing a voicemail from Richard that she can’t determine whether is old or new. She dips her toe “into the bad place” by dialing into Richard’s answering machine (of course she knows the code) to hear the message she left him responding to his old or new message. After hearing another message from a mysterious woman after dialing in, she starts wading “in the bad place” by calling Richard’s daughter Michelle and hanging up after determining that Michelle was in fact the mysterious voice on the other message. Finally, she throw caution to the wind, vacates the pool, walks to the top of the high dive, and proceeds to belly flop her way into immersing herself in “the bad place” when she attempts to erase her message to re-record but accidentally erases Richard’s outgoing message instead. Accidentally erasing your ex-boyfriend’s outgoing voicemail message and replacing it with a message where you speculate about having your period? I think that qualifies as immersing yourself in “the bad place” and “pulling a Monica” with platinum status. Plus, my favorite part? Monica’s scream when she realizes she has changed Richard’s outgoing message. There is something about Monica screwing up and screaming out “Nooooooooooooooooo!!!!” that makes me crack up every time.

One of the most endearing storylines in an episode chock-full of endearing storylines is the fight that Chandler and Joey get in over who should get to sit in the chair. When Chandler gets up from the chair he was sitting in order to use the bathroom, Joey seizes an opportunity to sit down in the spot that Chandler vacated. When Chandler returns, he informs Joey that he was sitting there and demands that Joey give him his seat back. Joey refuses and we’re off to the races. The squabble keeps escalating and escalating to rarefied levels of hilarity. Perhaps the altercation is so funny because Joey and Chandler attempt to resolve this conflict with the maturity of two prepubescent siblings. First, after Chandler returns to Monica and Rachel’s after getting dressed for the museum benefit, he expects when Joey gets up he will be able to reclaim the chair. However, unbeknownst to Chandler, when Joey gets up…he takes the chair cushions with him. Chandler protest that the cushions are “the essence” of the chair. Joey retorts, “That’s right! I”m taking the essence!” Of course, Chandler must then retaliate. To get Joey back for stealing the essence, Chandler hides all of Joey’s underwear prior to Joey changing into his tuxedo for the museum benefit. After discovering the prank, Joey comes back over to Monica and Rachel’s apartment and informs Ross that he can’t change into his tux without his underwear. When Ross asks why, Joey informs him that he’s currently going commando. Sure enough, Ross takes the bait and asks why he can’t continue going commando at the museum benefit. This sets up one of the greatest Friends lines of all-time. Joey informs Ross, “It’s a rented tux, okay? I’m not gonna go commando in another man’s fatigues.” After dropping the walk off shot of the night, one would think that Joey might be satisfied but, rest assured, he still needs to get even with Chandler for stealing his underwear. He leaves vowing to do the opposite of stealing his underwear and returns moments later wearing all of Chandler’s clothes. Joey hilariously struts around, does some lunges, and delivers yet another memorable line. Mimicking his roommate, Joey declares, “Look at me, I’m Chandler. Could I be wearing any more clothes?” In case you haven’t caught on yet, this was one massive episode for Joey Tribbiani in the funny department. I hate to say it, but the performance we just documented from a middling soap opera actor totally upstages our Chan Man Quip of the Week at the end of this post. This rarely happens, so mad props to Joey for out maneuvering the king of the one-liners this week.

One last thing…that dress, tho. The other storyline involves Rachel flirting with the idea of skipping the museum benefit after Ross yells at her and embarrasses her in front of their friends. At one point she even changes into pajama pants and a New York Knicks sweatshirt. In the end, she decides to go when Ross agrees to drink the fat to demonstrate how much he wants and needs her there by his side. When Rachel ultimately walks out of her bedroom ready for the museum benefit, she is wearing a stunning green dress and informs Ross that (much like Joey) she’s “going commando too.” Considering that this image has been burned into my permanent memory since I was of the impressionable age of 17, I will close by saying that this image would make a smash hit of a Throwback Thursday #TBT post on Rachel Green’s Instagram. Am I right or am I right or am I right? Nexties.

Recap in the Key of Phoebe – This is the one where (despite a strong effort) Ross is unable to stop from unleashing Red Ross (his alter ego) when the gang risks making him late for a museum benefit, Joey and Chandler get in a massive fight after Joey takes Chandler’s chair, Monica goes to the bad place after she can’t tell whether a message from Richard is old or new, Phoebe falls victim to Chandler and Joey’s fight when she is on the receiving end of a glop of projectile hummus, Rachel flirts with not attending the museum benefit after baring the brunt of Red Ross’ wrath, and in the end every one is ready with 5 seconds to spare after Rachel changes her mind because Ross was willing to drink the fat.

Chan Man Quip of the Week – [The Setup] After realizing that Monica is not in her bedroom getting dressed but rather is in there trying to call Richard on her bedroom’s phone, Phoebe and Chandler follow her in there to stop her. With the camera still in the living room, Phoebe’s voice can be heard inside Monica’s bedroom screaming, “Get away from the phone!” Phoebe then casually walks out of Monica’s bedroom holding the receiver and cord to Monica’s bedroom phone and informs Ross and Rachel, “She’s just getting dressed now.” [The Knockout] Having just witnessed a spat between Monica and Phoebe, Chandler follows Phoebe out of Monica’s bedroom with a mischievous smirk on his face and asks, “Is it wrong that I was totally aroused by that?”