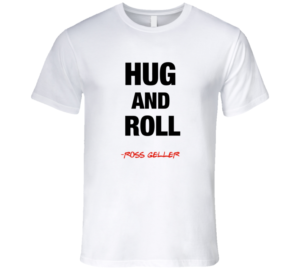 Friends S3:E3 – Howdy, gals and guys. How’s everyone doing today? Well, I’m a bit perplexed (thanks for asking). The reason? Here we are sharing in only our third post of the season but somehow we’ve already made it to October. Can you believe it? I know you’re thinking, “Surely this is some sort of mistake.” Maybe, let me double check. (Looking up at my calendar.) Nope, it’s definitely October (and don’t call me Shirley). Apparently time flies when you’re busy working four hours a day, one day a week. So October has arrived, huh? I guess so because the leaves are changing color, football is in full swing, and since it’s Monday…I’m throwing you another perfect spiral all the way down the field and into the Friend Zone. (See what I did there?) All you have to do is sprint 100 yards and make sure you catch it. In fact, for those of you keeping score…I am actually coming up rapidly on my deadline for today’s submission at this late hour on Monday afternoon so you might call this particular pass a Hail Mary. I know, I know. It’s pretty lame that (as mentioned above) this is only our third post of the season and I’m already prefacing one of my infamous “mailed in” submissions. On the bright side, you must admit that I brought the goods these past two weeks so it all evens out in the wash. Agreed? I knew you would understand.

So in the brief time that we have together today to discuss this episode, I thought I would use it to say that I always thought that David Arquette was a bit unusual. Not necessarily in a bad way but that the dude definitely marches to the beat of his own drum. I mean, after staring in the wrestling movie Ready to Rumble, my man actually starting appearing at WCF and WWE events as a wrestler. Given that his physical stature is less than imposing, that’s a little strange. Once again, weird in a channeling your inner Andy Kaufman redeeming kind of way…but weird, nevertheless. All of this is to say that (given that David Arquette already gives off the vibe that he is an unusual fellow) he was perfectly cast in this episode of Friends as Ursala’s creepy stalker ex-boyfriend. The role seems to suit him. It is interesting that Arquette is involved in a storyline where he doesn’t work directly with his real life girlfriend at the time (and future wife) Courtney Cox, but rather her co-star, Lisa Kudrow. (Hint: This sets a precedent that repeats itself later in the series. Considering the giant elephant in the room when discussing the romantic relationships of the Friends cast, I bet you can guess at least one of the cameos of which I speak). Cox and Arquette infamously met in 1996 on the set of Scream. He makes a perfectly cast hilarious cameo in today’s episode of Friends and the rest is history (including Arquette and Cox’s marriage as of May 2013). In closing, I just want to make a quick acknowledgement of the recent loss of David Arquette’s sister Alexis. A brilliant actress in her own right, Alexis was also a prominent figure in the transgender community. Rest in peace, Alexis.

Recap in the Key of Phoebe – This is the one where Chandler seeks advice from Ross and Rachel to avoid the types of relationship pitfalls that have accidentally been getting Janice mad at him, Monica needs a new plan to get over her man (Richard) and that plan is jam, Phoebe develops a crush on her sister Ursala’s stalker, Joey is shocked when he discovers that a sperm bank he once donated to hasn’t given away any units of Tribbiani, and Ross winds up on the receiving end of Rachel’s wrath when Janice informs her that Chandler has been using Ross’s hug and roll technique.

Chan Man Quip of the Week – [The Setup] Joey, who has been eating jam constantly since Monica began her “plan to get over her man,” is sitting at the kitchen table with Chandler while Monica shops for sperm donors in the living room as Ross and Rachel look on in horror. Joey motions to Chandler to offer him a taste of the jam he is eating straight out of the jar. [The Knockout] With as much contempt as he can muster (pun intended), Chandler responds, “Nah, it’s all right. I just had a jar of mustard.”