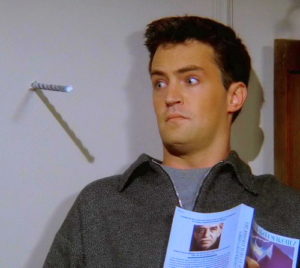 Friends S3:E5 – Happy Monday morning, Friends Crafters. Glad to be back together with you for the fifth consecutive week. I’m taking some initiative today by trying to get this post written and delivered to you before embarking on my four-hour outing to Top Golf (I think the technical term is lunch break). Indeed, today is one of those rare occasions where I woke up early with an extra skip in my step. And considering that I’ve already had my half-caf, double tall, easy hazel nut, non-fat, no foam, with whip, extra hot latte this morning, I’m alert and ready to power right through today’s proceedings. Let’s begin this morning, girls and boys, by turning our text books to Chapter 53. Could someone read the chapter heading? “Chapter 53: The List of Five Celebrities You’re Allowed to Sleep With Without Your Significant Other Getting Mad.” Yes, well done. Thank you for reading, Johnny. So today, class, our Friends are creating lists of late 90’s celebrities that they’re allowed to sleep with without getting in trouble. Can anyone name one of today’s celebrities that you would like to have on your list? Becky? “Channing Tatum.” Okay, great Becky. Hey and with a name similar to Chandler, very FRIENDly of you. Anyone else? Timmy? “Jennifer Lawrence.” Great, thanks Timmy. I see you’re hungry to play the game. (Damn right…I just did that.) Okay, how about one more? I see a hand raised in the back. Yes, go ahead. “Ken Bone.” Damnit, Kenny is that you? I didn’t even see you sneak in. I figured you would still be out in LA trying to supplant Guillermo as the most lovable weirdo on Jimmy Kimmel Live! Stand up, son and let me explain a few things to you. First, you are not a celebrity. You’re having your 15 minutes of fame because you asked the two major party nominees for the presidency of the United States (with the entire world watching) to talk about energy policy and didn’t say the words climate change? What kind of ridiculous lack of understanding of the monumental challenge we face waste must you have to ask an energy question without pinning the candidates down on the most important issue? Here’s a thought, Ken. How about just straight up asking the candidates about climate change since the media seems hellbent to allow one of them to get elected President without ever having to go on the record in any detail about what they plan to do to deal with it. People see you as having brought a bit of positivity into the campaign? Not me. I see you as a feckless, tone-deaf harlequin who abdicated your responsibility to impact our political discourse in a meaningful way. Second, let’s set aside for a second the fact that you’re not a celebrity and examine what you just did here in my class room. I asked the class to raise your hands to give an example of a celebrity you would like to have on your list and you named yourself? Really, Ken? Is your list laminated? What kind of strange weirdo names himself as a celebrity he would be allowed to sleep with and not get in trouble with his significant other? Come on, K-Dawg. That’s just strange. And, I’m scared to ask, but who’s your significant other? Never mind, don’t answer that. I have to say, you’re doing some serious damage to the name Ken (our family name, right Joey Tribbiani?) and by the way…Krayzie, Bizzie, Layzie, Wish, and Flesh aren’t very happy with you either. Lastly, what kind of engaged voter could have sat through these past 15 months of constant bombardment by this presidential campaign and still truly not know which candidate is the better choice? My suspicion is that they shouldn’t call you an undecided voter but rather they should call you a “wants to get on TV” voter. Because I got to tell you, Kenny…if you’ve been watching everything that has unfolded over these past 15 months and still legitimately not been able to tell who is a better choice between Secretary Hillary Clinton and Sexual Assault Posterboy Donald Trump, I don’t think I’m really interested in any question you could have possibly asked the candidates to make up your mind. You know what, Ken? I’ve had enough of you. That’s it. Go to the Principle’s Office. Don’t talk back. I could care less if you’re permanently kicking me out of The Bone Zone. Bye, Kenny. See the clock on the class room door? It reads 14:49. Don’t let the 15:00 hit you on the way out. Sorry you had to see that, class. I’ll tell you what. Because we all just had to endure the disruptive behavior of Ken Bone, I’m going to let you out a little early today. I’ll leave you with one final thought. At the end of today’s episode, Chandler bets Joey that he won’t fit inside a cabinet in the homemade entertainment center. Joey gets in the cabinet to win the bet. Chandler then proceeds to take a piece of wood and lock Joey inside the cabinet before leaving the apartment all together. Could this just be another meaningless interaction between a couple of roommates or could this be foreshadowing for a future episode? YOU DECIDE…how bringing this back fits into the days of our livez.

Recap in the Key of Phoebe – This is the one where Phoebe has a hard time bonding with her younger brother (Frank, Jr.) when he comes to visit, Joey wants to create a mail slot for him and Chandler so he decides to build a new entertainment center, Monica diverts Joey from the entertainment center project to redo her floor after Joey shows her how grungy her old tile is, Ross laminates a list of five celebrities he’s allowed to sleep with, Rachel allows Ross to hit on Isabella Rossalini when she shows up at Central Perk, and Phoebe ends up having an a fantastic weekend with Frank, Jr. that even included going to Time Square and finding ninja stars.

Gandalf Gaffes – It has been clearly established at this point in the series that Monica Geller is a neat freak. Therefore, when Joey demonstrates to Monica in today’s episode that a corner of the tile floor in her bathroom is less grungy than the rest because it has had less wear and tear from years of being covered, our spider senses started going off that something was amiss. We already know Monica to be the type of person who regularly cleans her apartment down to the very last nook and cranny. Therefore, it not only seems improbable but it seems down right implausible that Monica would not have already known that the covered tile was less grungy than the uncovered tile in her bathroom before Joey pointed it out to her. The Monica Geller that has been clearly established as one of our beloved primary characters would not only have already been aware of the issue, but would have taken steps to rectify it after the first time that she noticed the tile was fading. While this is yet another minor Gandalf Gaffe in a series of minor Gandalf Gaffes, it cannot be overstated how important it is for us to document every single last one (no matter how understated some may seem). Because if we can’t document every single last Gandalf Gaffe, then really…what are we doing here people? But yeah, this was kinda of subtle…therefore, a level one infraction.

Gandalf Gaffe #10: Monica discovering a corner of her bathroom that is less grungy than the rest is a gaffe. We have clearly established as precedent in prior episodes that Monica is a neat freak who would never allow even one nook or cranny in her apartment to go uncleaned for more than a week, much less years on end and therefore would have already known that the covered tile was less grungy than the rest.

Chan Man Quip of the Week – [The Setup] Chandler is in his room minding his own business reading when he realizes that a very sharp, long drill bit is entering the room through the wall disturbingly close to his head. He runs out into the living room to discover Joey there working on the homemade entertainment unit. When Joey sees Chandler has hastily come out of his room, he asks, “Oh, I’m sorry. Did I get ya?” [The Knockout] Clearly frustrated by the stupidity of the question, Chandler fires back, “No, you didn’t get me!! It’s an electric drill, you get me, you kill me!”

Headline Image Source: How You Doin’? on Tumblr.