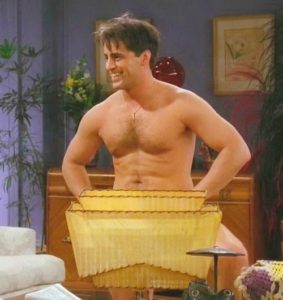 Friends S3:E6 – When black cats prowl and pumpkins gleam, may luck be yours on Halloween. Hey there, boys and girls. Happy Halloween to you and yours! How cool is it that the wickedest of wicked holidays is on a Monday this year? I’m super stoked that we get to spend a few minutes together on the scariest day of the year. If you guessed that your boy Kenny Adams would be dressing up for Halloween, you guessed correctly. Wanna know what I dressed up as today? (Drum roll please…) I’m Casper the FRIENDly Ghost! Ha ha, I know you’re feeling that, right? The fact that today is, indeed, the scariest day of the year seems apropos to today’s festivities considering we have two terrifying Gandalf Gaffes to dissect from the infamous flashback episode that we will be covering during our time together. I won’t get too much into the plot of today’s episode during my opening remarks because we will dissect the episode in excruciating detail during the Gandalf Gaffe section of today’s post. For now…I just want to say, Happy Halloween! I hope everyone has a blast tonight but stays safe. Also, for any of you out there who enjoy when I deviate away from pop culture (and Friends specifically) to dip my toes in the ice cold water of political commentary, rest assured that I will once again fishing those waters next week in our final post before Election Day 2016. After that, I promise to do my best to avoid discussing politics again during this blog series until the 2018 cycle is in full swing. Any who, that’s what I got on this sugar-driven holiday. Don’t get sick eating too much candy this week. I want you all to be feeling rested and healthy when we reconvene next week. Until then…one last thing. Go Cubs Go!

Gandalf Gaffes – Trick or treat. If you can believe it, we have two gaffes to dissect in today’s infamous flashback episode. In fact, not only do we have two gaffes to dissect, but, as it turns out, these are two very serious infractions. So, enough with the formalities, let’s begin shall we? Today’s episode starts with the gang sitting around at Central Perk. Janice, Chandler’s girlfriend, is there with them and she poses a question to the group asking who of the six of them has slept with who of the six of them. After they all deny having had any flings (aside from Rachel and Ross, or course), Janice asks if any of them had any close calls when it comes to hook ups. Everyone reacts as if to suggest that there have indeed been some close calls and the scene cuts away to opening credits. We return to discover that we are in a flashback and it says, “three years earlier” on the screen. Because we are currently in October of 1996, three years earlier implies that the flashback is taking place in October of 1993 (which is 11 months before the pilot episode). The story line that plays out during today’s flashback turns out to be extremely problematic with two previously established precedents. First, it is indisputable that the Friends pilot episode makes it clear that Rachel meets Chandler, Joey, and Phoebe for the first time in her life when she bursts into Central Perk soaking wet and wearing a wedding dress after running out on Barry (her fiancé). However, in today’s flashback (that according to the timeline, remember, takes place 11 months prior to the pilot) Chandler makes a move on Rachel at a bar (which eventually is renovated into a coffee shop and becomes Central Perk) after overhearing her confide in her girlfriends that she would love to have a fling with “the next guy she sees” in an effort to sew her wild oats (so to speak) before settling down with Barry. The flashback makes it clear that Chandler and Rachel’s interaction during the flashback was memorable enough that neither would have forgotten it 11 months later and reasonably think that they were meeting for the first time during the pilot. There is no other way to spin it, this story line in the flashback is a gaffe. Second, it is also indisputable that the Friends pilot and S1:E2 contain a story line where Ross’s wife Carol moves out in the pilot and then tells Ross that she’s pregnant in S1:E2. However, in today’s flashback, Ross reveals to Phoebe and then the gang that he has just discovered that Carol is a lesbian and that he thinks his marriage is over. Thus, if we are to believe the timeline that this flashback is offering, Carol reveals to Ross that she’s a lesbian and that they should no longer be married in October of 1993, however they continue to live together and have sex until September of 1994? Carol reveals to Ross that she’s pregnant in S1:E2 but it is not until S1:E23 that she gives birth (May of 1995). Therefore, in order to make the birth timeline work, it is indisputable that Ross and Carol were still having sex until around the time of the pilot. It is simply too implausible that Carol would reveal to Ross in October of 1993 that she’s a lesbian (with her lover Susan already in the picture, by the way) but Ross and Carol would still continue to live together and have sex for another 11 months. Once again, I have no choice but to rule that this story line in the flashback is another serious gaffe. It gives me no pleasure, but because of the extreme inconsistency of both of these infractions, I decree that they are both severe enough to go on the permanent record as level three infractions.

Gandalf Gaffe #11: As part of the flashback that takes place 11 months prior to the pilot episode, Chandler attempts to start a fling with Rachel at a bar that later becomes Central Perk. It was clearly established in the pilot, however, that Rachel meets Chandler, Joey, and Phoebe for the first time at Central Perk after running out on her wedding to Barry.

Gandalf Gaffe #12: As part of the flashback that takes place 11 months prior to the pilot episode, Ross informs the gang that he has discovered that his wife Carol is a lesbian. This is inconsistent with the timeline established in the pilot and S1:E2. In the pilot Carol moves out and in S1:E2 she tells Ross that she’s pregnant. Since Ben isn’t born until almost nine months after S1:E2, the implication is that Ross and Carol were living together and continuing to have sex until the pilot episode. It is not realistic that Ross and Carol would continue living together and having sex for 11 months after she revealed to him that she is a lesbian.

Ugly Naked Guy Watch – At the beginning of the flashback (which takes place about 11 months prior to the pilot episode) Phoebe is at her and Monica’s apartment (she was Monica’s roommate back then) looking out the window across the street. Ross is also there hanging out so she informs him that Cute Naked Guy is “really starting to put on weight.”

Chan Man Quip of the Week – [The Setup] Chandler is at his apartment during the flashback interviewing a roommate applicant named Eric. He starts the interview by asking, “So, uh, Eric, what kind of photography do you do?” Eric responds, “Oh, mostly fashion, so there may be models here from time to time. I hope that’s cool?” Quite pleased with Eric’s answer, Chandler continues, “Yes, that is cool. Because I have models here, you know……never.” Even though Chandler is already clearly pleased with how the interview is going, Eric decides it wise to go ahead and continue running up the score by informing Chandler, “Oh, yeah, during the summer, I spend most weekends at my sister’s beach house, which you are welcome to use by the way. Although, I should probably tell you, she’s a porn star.” [The Knockout] Unable to contain himself, Chandler breaks the pencil he is holding to conduct the interview in half and says, “Well, listen I ah, still have one more person to ah meet, but unless it turns out to be your sister, I think you’re chances are pretty good.” He then hugs Eric.

Headline Image Source: How You Doin’? on Tumblr.