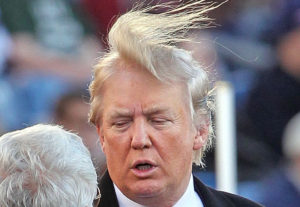 Friends S3:E7 – Okay, boys and girls. Here we are less than 24 hours away from Election Day in the United States of America. Today we will either be writing post number 53 in our 236 part Friends 20/20 blog series, or, if Donald Trump gets elected tomorrow, we will be writing post number 53 in our 53 part Oh Shit, Writing About a 20 Year Old Sitcom Doesn’t Matter Anymore Because the World Might Come To An End At Any Moment blog series. Clearly, anyone who has been following along with this column already knows how I feel. I’m no fan of Secretary Clinton but her opponent is the most unqualified and dangerous major party nominee in the history of the United States of America. That’s right, boys and girls. We have a real Mr. Big Shot running for president. And not the good ‘Chauncey Billups draining a clutch jumper to win a playoff game’ kind of Mr. Big Shot but the bad ‘Donald Trump crass, self-centered, narcissistic sociopath’ kind of Mr. Big Shot. Unfortunately for us, the type of Mr. Big Shot and the actual person running for president are one in the same. Even if we set aside the fact that he is too temperamental to be trusted with the nuclear codes and that suffering through even four more years with a climate denier in charge of our government could have catastrophic consequences, how can we conform Donald Trump’s behavior during the campaign to the dignity that the office of the presidency requires for America’s children? We all know the laundry list of vulnerable populations in our society as well as individuals that this man has insulted over the past 18 months. Therefore, there is no need for me to rehash this very long and painful laundry list. My question remains, though, how can we possible tell our children that it’s not okay to be a bully after they’ve witnessed a bully getting rewarded by being elected President of the United States? Forget liberal vs. conservative, establishment vs. populism, and everything else that the media has told us this decision was supposed to be about. Our election tomorrow has now become a referendum on decency in the United States of American. I can only pray that indecency does not win the day. And that’s all I really want to say about the election. I’ll admit, though, it’s really hard to focus on writing a pop culture column today. For whatever reason, I’m really nervous about this election and I just want if finally to all be over (assuming that Secretary Clinton wins). I’m sure that reading my in depth analyses about all of tomfoolery that Monica, Rachel, Phoebe, Chandler, Ross, and Joey got themselves into 20 years ago today is probably very low on your list of priorities as well. That being the case, I’ll close my opening remarks by sharing the behind the scenes footage from an Access Hollywood tape of Donald Trump that we all know but should also all watch one more time before we vote. If there is any decency left in our country, this should be an automatic disqualification for the presidency. Do not elect this man as your president, America.

Recap in the Key of Phoebe – This is the one where Ross can’t get along with Rachel’s dad, Joey starts teaching soap opera acting at a local community college, Chandler call Janice’s soon-to-be ex-husband a wank when they see he is using the divorce to sell mattresses on his television commercials, (after seeing the sales offers in the commercial) Monica shops for a new mattress at the Mattress King and ends up with a race car bed when Phoebe signs her name to approve delivery, and Ross goes from Mr. Big Shot to bonding with Rachel’s dad over making fun of Bobby Bobby (her chiropractor).

Chan Man Quip of the Week – [The Setup] Chandler is alone in Monica’s room sitting on her race car bed and fantasizing about driving a real car out in traffic. Perfectly content to be lost in his own little daydream, Chandler mimics the noises that his car would make and then yells out to an imaginary fellow commuter, “Varrrrrroom! Hey! Watch it lady! Varrrrrrrrrrom!” He goes on to mimic the sound of his tires screeching as he comes to a stop and looks over to apparently see an attractive women. He yells out, “Hey-hey good lookin’!” and proceeds to honk the bed’s horn in approval. As he puts his imaginary car back in gear, yelling, “Varrrrrrrrroom” some more, he notices that Rachel has walked into Monica’s room and his observing his behavior with a stone-faced look. He acknowledges her presence and says, “Alright, I’ll leave.” [The Knockout] As he gets up from the bed and begins to leave the room, Chandler informs Rachel, “My bed’s so boring.”