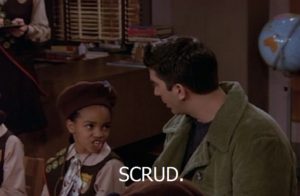 Friends S3:E10 – No, I don’t want no scrud, a scrud is a Brown Bird that can’t get no love from me, hanging out the passenger side of her older sister’s ride trying to sell cookies to me. Yo! What is new, my Friendsetters? Hope everyone is having a splendid holiday season. We’ve been on hiatus since the Monday prior to Thanksgiving, so there is much to catch up on. For starters, we are unfortunately less than six weeks away from Inauguration Day. Needless to say, we here at theLeftAhead have much to do between now and then to properly prepare for launching into our resistance mode. Since this site went live in June of 2011 (the latter stages of President Obama’s first term), we have had good fortune to operate in a political sphere far removed from the radicalism that fueled our lineage. For those of you who have been with us over the long haul and remember Seeds from the White Rose and The Stash Box, you are probably well aware that shit’s about to get a lot more shall we say… REAL around here come January 20th. For the rest of you who discovered us after the launch of theLeftAhead, my best advice is that you buckle your seat belts once Donald Trump assumes the presidency. If you’re only here to read our pop culture writing or Friends 20/20 in particular, don’t fret. As theLeftAhead’s pop culture writer, I can assure you that our site’s political commentary won’t spill over into this blog series or my pop culture writing anymore than it has in the past. I’m just delivering a more general announcement to our site’s readership that protesting Republican presidential administrations is one of the things that we do best, so stay tuned.

Now that that’s out of the way, what do you say we get right into this week’s episode? I knew we’d be on the same page. This episode marks a turning point for Rachel Green as she finally is pushed (by a humiliating request from Gunther) to overcome her fear and quit her job at Central Perk. Unbeknownst to us (the audience) in real time, but Rachel’s decision to jump off a cliff, so to speak, by quitting her job in pursuit of her career aspirations in the fashion industry will set into motion a series of events that will have serious repercussions in her personal life. Jot down a little reminder about this in your notes, class, because we will be returning to explore the subject matter that I just foreshadowed when we reconvene in the spring. Being that this is the last episode of 1996 (or in our case, 2016), this episode is also a Christmas episode. One of the Christmas themed plot lines that the writers lay out for us is Phoebe’s aversion to the tradition of decorating Christmas trees. When she discovers that Joey landed a seasonal job selling Christmas trees, she informs him that she finds the practice of decorating Christmas tree “corpses” grotesque. Luckily, Joey is able to convince her that the trees are happy to be chopped down and decorated because they are fulfilling their life purpose by making people happy. However, when Phoebe comes to visit Joey at work, she discovers that the old trees are put in the chipper and destroyed which sends her off on a whole other tangent of protest. In the end, Monica and Joey decide to collect all of the old trees and put them in Monica and Rachel’s apartment so that they are able to fulfill their Christmas destiny, so to speak. Phoebe is overwhelmed with joy to receive her Christmas surprise of knowing that all of the old trees have been saved. This story line is great because first, it really demonstrates the uniquely weird but caring person that is Phoebe. It, secondly, shows what good friends Monica and Joey are to go to such lengths to make Phoebe happy. Awe, just thinking about it makes me all warm and fuzzy inside. On that high note, considering the tough year it has been, I think we have landed in good place to say, “Peace Out, 2016.” I hope all of you, the readers out there, have a fabulous rest of your holiday season. Happy New Year and see you in 2017. Adams, out.

Recap in the Key of Phoebe – This is the one where Gunther asked Rachel to retake the Central Perk waitress training so Chandler convinces her to quit her job, Ross accidentally breaks a little girl’s leg in his building and offers to sell Brown Bird cookies for her to make up for it, Joey gets a seasonal job selling Christmas trees but Phoebe objects to the practice of objectifying the new trees and destroying old ones, Monica gets hooked on Brown Bird cookies to the point that Ross has to cut her off, and Rachel lands a new job in the fashion industry which allows her to say goodbye to the tray spot forever.

Chan Man Quip of the Week – [The Setup] The gang is at Central Perk discussing the unfortunate incident that resulted in Ross breaking a little girl’s leg. Monica, visibly flabbergasted, rhetorically asks, “You broke a little girl’s leg?” Ross sheepishly responds, “I know. I feel horrible. Okay?” [The Knockout] Pretending the read the paper, Chandler reports, “Says here that a muppet got whacked on Seasame Street last night.” Turning to Ross, he continues, “Where exactly were you around ten-ish?”