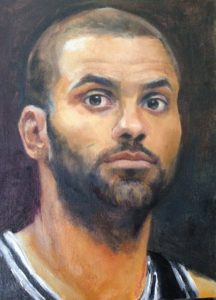 Rocket Man – And I think it’s going to be a long, long time till touchdown brings me around again to find I’m not the man they think I am at home. I mean, come on. This is insanity. Kahwi Leonard just obliterated James Harden and in so doing…the way the “experts” framed this year’s NBA MVP race. You need to take your “best two-way player in the game but…” ball and go home. Kawhi is the best player in the game, no qualifiers needed. Not only is he the current best player in basketball, he’s playing at an historic level. How often have you seen a player guard the best offensive weapon in basketball for an entire playoff game, hold said best offensive weapon in basketball to 13 points (3-17 shooting from the field and 0-5 from the field with two turnovers while checking him as the primary defender) while getting seven rebounds, three steals and a block, and then on the other end of the floor score 34 points (13-16 from the field, 3-4 from range, 5-5 from the line) and dish out eight assists? The answer is not very often at all. I can only think of four other wing players in the history of the game that were/are capable of having a playoff game that ridiculous. Larry Bird, Michael Jordan, Kobe Bryant, and LeBron James. That’s the list. For what it’s worth, the last time a player had at least 30 points, eight assists, and seven rebounds while shooting at least 80 percent from the the field in a playoff game was Michael Jordan in Game 2 of the 1991 NBA Finals. Considering that MJ is the GOAT, this tidbit isn’t surprising but gives historical context to make Kawhi’s game last night all the more impressive. To be clear, I’m not really sure that Larry, Kobe, or LeBron have ever had a playoff game as dominant on both sides of the ball as Leonard did last night, that’s just the list of players who had/have the ability to potentially be that dominant on both ends of the court. All of this is to say that Kawhi Leonard has elevated himself into rarified air. Because we have the best player in basketball and because we got back to playing loose, unselfish, joyful team basketball, the San Antonio Spurs returned the favor and blew out the Houston Rockets 121-96 last night at the AT&T Center to knot our Western Conference Semifinal series at 1-1. Kawhi was prodigious, marvelous, superhuman but all things considered, the player of the game is Tony Parker. Tony had 18 points (8-13 from the field, 2-2 from range) and four assists. Unfortunately, it’s no secret why I chose Tony for player of the game on a night that Kawhi Leonard put together one of the greatest two-way performances in NBA history. The longest-tenured Spur and the four-time NBA champion deserves the honor because his 2016-17 season is suddenly over.

Man. This really, really, really sucks. I can’t remember ever feeling like this the day after a Spurs playoff win. Sure, there was the time – prior to the 2000 playoffs – the Spurs announced that Tim Duncan was unavailable for the first round with a torn lateral meniscus in his left knee. That sucked. It robbed us of a legitimate chance to defend our first title and allowed a talented Shaq-Kobe Lakers team an easier path to reach the NBA Finals and learn how to become champions themselves (without Duncan, the Spurs lost 3-1 to the fifth-seeded Phoenix Suns in the first round as the four-seed). There was also the time – prior to the 2009 playoffs – the team announced that Manu Ginobili was out for the playoffs with a fracture in his right distal fibula. This also sucked and, once again, an easier path was cleared for a Kobe Bryant-led Lakers team to get back to the NBA Finals and win another title (without Manu, the Spurs lost 4-1 to the sixth-seeded Dallas Mavericks in the first round as a four-seed). But, as unfortunate and costly as both of those injuries were, at least they happened prior to the playoffs where we had time to process them and reassess our expectations. I don’t ever remember the Spurs losing a superstar player to injury in the middle of a deep playoff run much less on the night of an exhilarating rivalry win. I don’t remember, because it hasn’t happened (at least not since I started watching religiously in 1989-90, David Robinson’s rookie season). Perhaps because for three decades straight we’d been blessed with the good fortune to not lose a superstar player mid-playoffs, I started off this process in denial. Last night, after the game, even though it looked bad…I was still hoping for the best. I kept telling myself, Kevin Durant’s injury this season was originally feared to be worse than it ended up being. Also, just the other day – in Game 1 of the Eastern Conference Semifinals series between the Boston and Washington – Wizards forward Markieff Morris went down with what was thought to be a devastating ankle sprain only to return in Game 2 and have his best game of these playoffs. Or did he? I won’t lie, I went to bed mildly optimistic that we might be able to get our future Hall of Fame point guard back at some point in this series or at least at some point in this playoff run. Sadly, this morning around 10:00 am (MDT), I was reminded that The Nile is a river in Egypt. In other words, my worst fears were confirmed when the Spurs released the following statement… 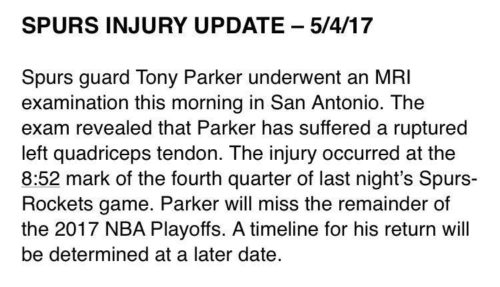 I never even consider that this could happen to Tony. In his exemplary 16-year NBA career, TP has never missed a playoff game. Lamentably, tomorrow night will be the first one ever. The last time the San Antonio Spurs played a playoff game without Tony Parker was on May 2nd, 2000 (more than 17 years ago) in the aforementioned series against Phoenix that Tim Duncan missed due to injury. Since then, Tony Parker has played in 221 playoff games (most among active players, fifth-most all-time). He is ninth all-time in playoff points and fifth all-time in playoff assists. He joins long-time playoff rival LeBron James as the only two players in NBA history with more than 4,000 playoff points and 1,000 playoff assists. TP also holds the NBA record for most playoff games won by teammates with two of his. (I’m sure you can guess which two.) Tony Parker and Tim Duncan had the NBA record for most playoff wins by teammates with 131 wins. That is until, in some sort of ironic Big Three stroke of poetic symmetry, Tony Parker and Manu Ginobili tied that record with last night’s win. Man. This really, really, really sucks. I feel awful. I’m not sure if I felt worse on Tuesday after getting blown out at home by 27 points or today after returning the favor and blowing out the Rockets by 25. I think I feel worse today. I don’t know what else to say about it except get well soon, Tony. May the fourth be with you. There’s no question this is a devastating blow to our title hopes but if there is any team that is equipped to carry the “next man up” mantra all the way into June it’s a Gregg Popovich coached team. I still feel very confident that we can win this series with our in-state rival and even re-steal our home court advantage back tomorrow night. The Olajuwon-esque dismantling of the likely NBA MVP that Kawhi Leonard put together against James Harden last night cannot be understated. It was the type of undressing that can get in the receiver’s head and ruin him psychologically for the rest of a series. I’m not predicting this will trigger a psychological meltdown from The Bearded One, but it’s not outside the realm of possibility. Playoff series are about imposing will more than anything else. Last night, Kawhi reached a level of dominance that very few players reach. The type of dominance to conduct the game like classical music, orchestrating the movements of a superstar opponent in order to reduce that opponent into an operatic prop. Being that dominant is psychological warfare. Once it’s in the opponent’s head that you have that type of control over the game, their talent becomes meaningless. Of course, barring The Klaw already having a firm grip on James Harden’s soul, we still have every reason to fear Houston that we did two days ago (plus the added one of losing a former NBA Finals MVP for the rest of the series). The Rockets are extremely dangerous and I have no doubt that they have the ability to bounce right back tomorrow night. That being said, with Kawhi looking more and more like Michael Jordan with every single passing game, I still like our chances to take care of the Rockets and I still believe we have a puncher’s chance to win the title. By the way, Tony’s injury may hurt my heart but it doesn’t hurt my memory. Don’t get it twisted. I can still remember two nights ago when Rockets fans were convinced they had already left the #BlackAndSilver for dead on the side of the road. You remember, right, H-Town? You were riding that bandwagon hard in order to try to keep pace with the hype because you thought your team was barreling down the highway in the Ferrari that is Mike D’Antoni’s offensive system in search of the outer limits of seven seconds or less basketball nirvana. Two days ago, you were thinking…next stop, Western Conference Finals. I know you remember. Well, as painful of a night as last night was for the city of San Antonio, it was also a reminder to the city of Houston to stay in your lane. We have Kawhi Leonard and you don’t. Guess who’s back.