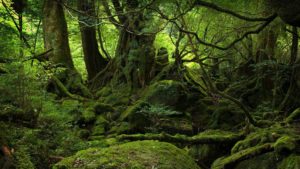 Welcome to the Jungle – One of the great equalizers in military conflict is the element of surprise. Guerrilla tactics can often catch a superior army off guard to win a battle, especially in terrain as hostile as the jungle. Once the inferior army has successfully stunned the opponent through its initial guerrilla attack, it can use jungle terrain to its advantage to stay two steps ahead until the battle is won. Last night, the San Antonio Spurs foolishly attempted to provide a neighboring rival with a gentlemanly welcome to the jungle (playoff basketball at the AT&T Center) only to find out a few minutes too late that Houston was already in the building lurking in the shadows readying to welcome us to jungle warfare. Indeed, the Rockets made their three hour commute over to San Antonio on Interstate 10 and proceeded to punch us in the mouth in Game 1, destroying the Spurs 126-99 to instantly snatch home court advantage away from us in this suddenly desperate Western Conference Semifinals series. No sour grapes here. Give them credit. Considering that they slapped us with our largest halftime deficit in playoff history (30 points), the Rockets earned their first playoff victory in San Antonio during the Popovich-era. From the opening tip, we simply weren’t ready for the speed of Houston after having just played the plodding Memphis Grizzlies for six straight games. By the time we adjusted to their speed, it was too late. The good news is that we’ve seen it now and there is no excuse for our defense not to be ready for it the rest of the series. While quite effective as a sneak attack, Houston’s guerrilla tactics alone won’t win the war. There will be a counter attack and eventually this, like every playoff series, will settle into being a test of each team’s defensive armament. As for the use of guerrilla tactics in Game 1, the Rockets went 22-50 from the three point line. That’s not a typo. These fools shot 50 threes. Amazing. I hope they shoot 50 more in Game 2. If Daryl Morey and Mike D’Antoni think they’re going to knock the San Antonio Spurs out of the playoffs by shooting 50 threes a game, God bless them. I’m happy to take our chances with that. Please keep it up, Houston. Having lived through dozens of best-of-seven series in these past 20 years, nobody knows better than Spurs fans that a playoff series is a marathon. Sure, you can overpower your opponent with hot three point shooting for one night. It is highly unlikely, however, that you will successfully overpower your opponent by expecting to rely on hot three point shooting for two weeks. By the beginning of the fourth quarter last night and with the outcome already determined, I was rooting for the Rockets to make threes. I’m a firm believer that each team only has a finite amount of “made threes” in its stockpile for a series. That being the case, I believe its not only bad form but also an injudicious squandering of resources to continue draining them during a game that’s already in hand in an effort to pile on. Last night, the Houston Rockets went 7-13 from deep in the fourth quarter while leading by somewhere in the neighborhood of thirty points for most of the frame. We’ve seen this type of shortsightedness from this very same coach’s teams in past playoff battles. Mike D’Antonio just can’t seem to help himself. Two weeks is a long period of time and karma has a funny way of catching up. So thanks for wasting a bunch of “made threes” from your series stockpile in a meaningless quarter, Houston. Chances are that there will be a close game later in this series where Houston’s shooters will tighten up and the Rockets are going to wish they had a few of the seven “made threes” (that they wasted in the fourth quarter of Game 1) back when they’re watching a potential series-altering crucial one rim out at the most critical of moments.

While our good, dear friends over in the Rockets’ fanbase were all over social media last night celebrating like Houston just won their third NBA championship, I’m not ready to panic yet. I still expect this to be a long series favoring the Spurs. My unflappable confidence aside, I’m sure the Rockets in 6 crowd is feeling quite emboldened today. Somewhere on ESPN television right now there’s an “expert” writing the Spurs’ obituary, then waxing poetic about the brilliance of James Harden and the Rockets’ offense, and finally wrapping up the segment by prognosticating about Houston’s chances to upset the Warriors. And the city of Houston is lapping it up by a spoon. It doesn’t matter to Rockets fans that, at a company as loyal as ESPN, this very same “expert” has about as much job security as Sean Spicer and will likely be laid off before Game 2, I guarantee that they are eating up as much “Rockets have broken the Spurs” analyses as they can find, soaking it in as if it’s being preached directly out of the Holy Bible. Everything must feel like unicorns and lollipops in H-Town today. Having often been on their side of Game 1 blowouts in series that we’ve eventually lost, I can’t help but think about how much more it’s going to hurt in the end, having experienced this type of exhilarating victory (and the false sense of security that comes along with it), if the Spurs comeback and eventually win the series (which I still fully expect). Sorry, Rockets fans. After the obnoxious display you put forward on social media last night, you won’t get any pity from me if and when the #BlackAndSilver close you out. Now, a little housekeeping. The player of the game was Kawhi Leonard. Honestly, I would have given it to anyone else, especially a role player, if anyone had done anything even remotely noteworthy. Sadly, Kawhi got absolutely no help in last night’s contest and therefore his 21 points, 11 rebounds, and six assists in 32 minutes gets the recognition by default. This cannot continue. Kawhi needs help. Particularly from LaMarcus Aldridge. While I still believe that the Spurs are the better team and should still be favored to win the series, let me be crystal clear. The Rockets are dangerous and capable of going straight through us en route to the Western Conference Finals. If, for some reason, LaMarcus Aldridge’s confidence is shot and he continues to play like he did last night (a shell of himself) for this entire series…Houston will win it easily. Let’s hope that’s not the case. Hopefully for LA, Tony, Manu, Danny, Pau, (and on down the line)…our supporting players just needed a wake up call that the competition just got a great deal stiffer. Houston was desperate for our attention and last night they got it. If, somehow, we didn’t receive the message…we’re going to be toast by the end of the week. That being said, tomorrow night presents an interesting test for the Spurs. We used to be a player in our locker room that provided a calming presence to help us regroup after a tough playoff loss. You know, a certain someone to lean on through adversity. That player is now retired and ladies and gentlemen…Matt Bonner is not walking through that door again. (Fooled you, of course I meant Tim Duncan.) All kidding aside, last night’s demoralizing defeat presents a great opportunity for Kawhi to start learning how to fill the void left by Timmy in the locker room the same way he’s filling the void on the court. Also, speaking of Matt Bonner, we could use a little Red Rocket mojo from our supporting cast tomorrow in Game 2. While Kawhi Leonard’s game is still ascending (into the stratosphere) as he continues his “best player in the world” journey, if last night has told us anything…it’s that he can’t beat Houston alone. For the first time since Hakeem Olajuwon, Houston has an MVP-caliber player surrounded by a supporting cast built to win. James Harden may very well be the most talented offensive weapon left in these playoffs. Sure, we know he can be more than offset by Kawhi Leonard’s two-way brilliance but our new franchise cornerstone is probably thinking, “I got this but only with a little help from my friends.” Superior contributions from Players Two through Thirteen is what the Spurs are going to have to get in order to take control back in this series. Houston has vastly improved their talent-base and I respect the hell out of the beatdown they laid on us last night but the fact remains that we are the deeper and better team. Tomorrow night, we just have to focus on going out and playing loose, unselfish, joyful team basketball; you know…the Spurs way. If we do that, I have every confidence that we’ll start to get back on track. Houston used guerrilla tactics to catch us off guard and win the first battle. They have our attention and we’re here now. Through playing for each other and as a team, we can still win the war…with the added bonus of getting to witness The Klaw outshine a Rocket Man.