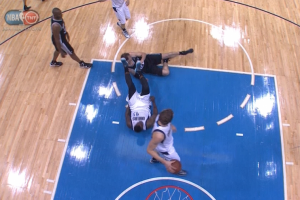 With a Little Help From My Friends – “What would you think if I sang out of tune, would you stand up and walk out on me?” Last night, the San Antonio Spurs endured another big stretch in the second half where we couldn’t find the right pitch on offense and, as a result, we came dangerously close to having every fair weather fan in South Texas jump off of the team’s bandwagon as we narrowly avoided going in the hole, 3-1 against the Dallas Mavericks. Instead, we displayed a tremendous amount of mental toughness and grit to get our first road victory of the 2014 playoffs and even the first round series at two games each by defeating the Mavericks 93-89 at American Airlines Center in Dallas. The Spurs are returning to the Alamo city having regained home-court advantage and it is now Dallas who might want to consider counting their own fortunes that Vince Carter’s prayer was answered on Saturday afternoon because, without that amazing shot, the Mavs could easily be a team facing elimination on the road tomorrow evening. San Antonio, who has still yet to put together a complete Spurs-like performance for 48 minutes in this series, took another positive step forward towards establishing a playoff mindset in this series and getting accustomed to the intensity of postseason basketball. By contrast, it was pointed out on the TNT broadcast, Dallas has been in a playoff mindset and dealing with postseason intensity for weeks having had to battle with Memphis and fight off Phoenix in order just to qualify to be here. That is always one of the dangers of clinching the best record in the league by a comfortable margin; we perhaps took our collective foot off of the gas at the end of the regular season and have had a hard time getting this behemoth of an 18-wheeler back to moving at full speed again. Through four games, the Spurs are fortunately back on track with two of the possible three remaining games at home and hopefully gaining momentum towards full playoff speed, which is a velocity that would allow us to finish this series off properly.

One of the stranger happenings from last evening’s dramatic game occurred late in the fourth quarter. It is becoming clear that something weird happens when a Spurs player gets tangled up on the ground during the NBA playoffs with a Mavs player who is a former teammate. Seemingly every time it happens, the Mavericks player involved is overcome with a sense of desire to channel his inner-Three Stooges. Remember when Jason Terry perpetrated one of the most infamous cheap shots of all-time when he couldn’t pass up the opportunity to fist bump former teammate Michael Finley in the groin during Game 5 of the 2006 Western Conference semi-finals? Well, history repeated itself last night when former-Spur DeJuan Blair decided to show off his soccer skills with Tiago Splitter’s head. After the game, Blair claimed that he was kicking his legs out in protest to a foul call and made contact with Tiago inadvertently. I’m not sure that Tiago buys that explanation, but either way, DeJuan’s outburst proved costly for the Mavericks. Not only did the catalyst of the Mav’s second half comeback from 20 down to take the lead (DeJuan had 12 points and 11 rebounds in the game) get himself ejected, but the #BlackAndSilver were awarded two free throws on the foul and one on the technical (and ejection of Blair) which allowed us to turn a one point deficit into a two point lead with 3:08 left in the game. Even still, the Mavs kept fighting until the bitter end and it took the biggest shot of the season (to-date) for the Spurs, a clutch three by player of the game Boris Diaw with 32 seconds left, to go ahead for good. Boris was able to provide much needed production off of the bench, which was mostly absent in the first three games if you take Manu Ginobili out of the equation, with his 17 points, 4 rebounds, and 4 assists. If Boris can play like that in Game 5 at home, and bring some of his fellow ‘Foreign Legion’ bench compadres along for the ride, the Spurs will put themselves in a better position to build and maintain a lead tomorrow evening. Should that happen, San Antonio will put ourselves in a position to have an opportunity to closeout on Friday when we return to The Otherside.