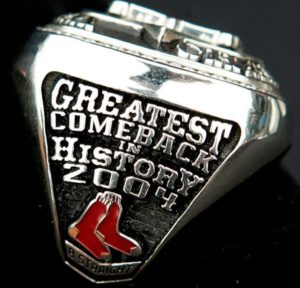 Carry On – It’s well documented that no team in NBA history has ever come back to win a playoff series after trailing 0-3. The “experts” will tell you it’s impossible in basketball. The thing is, according to the “experts” it used to be impossible in baseball as well. Until it wasn’t. The 2004 Boston Red Sox changed what is possible in baseball. Eventually, a team will change what is possible in basketball. Why not now? Why not us? I’ve been spending the better part of these past 40 hours (since Golden State defeated San Antonio 120-108 in Game 3 of the Western Conference Finals to take a 3-0 lead) talking my fellow Spurs fan friends off of the ledge. It pains me to say it, but after we were pushed on Saturday night passed to brink of what’s currently possible in basketball, most every Spurs fan I know lost hope. I guess I don’t blame them. The task ahead is daunting. Particularly daunting when you factor in the overwhelming likelihood that Kawhi Leonard won’t play in Game 4. Add to that, we are facing a talented, healthy team who will now be playing with the confidence that comes with being certain you are advancing to the NBA Finals. Guess what? I don’t care. I still believe we are winning tonight. I still believe we can win this series. I will never stop believing so long as there is basketball left in our season yet to be played. Call me crazy if you want, but my hope is based on more than just praying for miracles. It’s funny how everyone has so quickly forgotten that we beat the fourth best team in the league by 39 points on the road without Kawhi and Tony just eleven days ago. If we were capable of that, I know we have the heart and pride to beat the Golden State Warriors by at least one point for one night at home without Kawhi and Tony. Never underestimate the heart of a champion. Don’t get it twisted. Even without Kawhi, Tony, and now David Lee, we will be suiting up a roster with a combined eight championship rings against a Golden State roster with a combined six championship rings (including James Michael McAdoo’s who logged a whopping one minute in the 2015 NBA Finals). By the way, all six of the rings on the Warriors’ side were collected in 2015 when Golden State benefited from having little to no adversity while every single playoff opponent they faced that year was dealing with significant losses due to injury. When you throw a ringless Kevin Durant into this mix, these Warriors are not a battle-tested championship team. The #BlackAndSilver, on the other hand, are and we are not going to simply lay down to this cupcake Dub City squad because they will be rolling out more talent than us. Let me reiterate. I fully expect to win tonight no matter who we suit up. Once the immediate goal of not getting swept is accomplished, I know we can go back to Silicon Valley on Wednesday and start chipping away at Golden State’s certainty. Despite the outward projection of invincibility, because of their lack of experience overcoming adversity, this Golden State Warriors team is vulnerable. They can be gotten to and broken mentally. I can smell it on them. They reek of being vulnerable to falling apart mentally once adversity hits. I smelled it on them last year too and sure enough, they blew a 3-1 lead in the 2016 NBA Finals to the Cleveland Cavaliers and a true champion named LeBron James. The fact remains that Draymond Green can’t be trusted not to cost his team with his extracurricular mental breakdowns, Steph Curry misses when the pressure is at its greatest, and Kevin Durant would never ever have even been a Warrior in the first place if he wasn’t severely and chronically vitamin-deficient in the mental toughness department. I know these Warriors can be broken mentally. We just need to keep pounding the rock and if we finally catch a break or two…I know we can still be the team to break them. It just takes one to get this thing going. If we can get our “heart of a champion” pride win tonight and Kawhi is able to return for Game 5, who’s to say we can’t figure out a way to finish the job that we set out to do in Game 1 by winning a road game at Oracle on Wednesday night? Come Friday, we could be in the driver’s seat to win this series at 2-3, with all the momentum and staring at a home game. Channeling my inner-Kevin Garnett…ANYTHING IS POSSIBLE. Anything is especially possible when you have the best coach in basketball and still have a player who can do this…

Manu was fantastic in Game 3. The player of the game poured in 21 points (7-9 from the field, 2-3 from deep, 5-8 from the line). Watching the 39 year old four-time NBA champion bring that type of effort in a game and series that will have little impact on his already cemented legacy was an utter joy. God, I love watching this man play the game of basketball. In my opinion, he’s the greatest magician this game has seen since Pete Maravich and something tells me, working in collaboration with Coach Pop, he still has a thing or two left up his sleeve for tonight and the duration of this series. I know that most readers who have gotten this far into my “shock the world” post already think I’m crazy to continue believing the Spurs will win this series. I know that most are ready to declare 2016-17 a good Spurs season that was ruined by the bad luck of having injuries render us unable to compete during the Western Conference Finals. I cannot even begin to explain to you how little I care. I do not believe tonight will be the end of the journey, I believe tonight will be the beginning of something historic. I believe we are on the precipice of Gregg Popovich and Manu Ginobili’s finest hour as a tandem. I believe the ex-military operative from Indiana and the past-his-prime magician from Argentina are in the dark crevices of the AT&T Center at this very moment concocting a “shock and awe” campaign to make the impossible possible, to make the Warriors certain trip to the 2017 NBA Finals vanish into thin air… 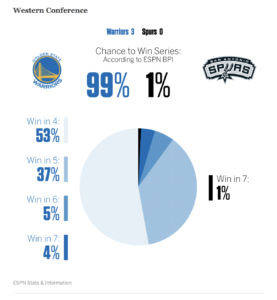 As I stated earlier, eventually a team will comeback from an 0-3 deficit to win an NBA playoff series. It is not a matter of if but rather a matter of when will it happen. In 100 years, when future NBA fans look back on the first time a team came back from 0-3 down to win a playoff series, if they read that that team was the San Antonio Spurs and that Gregg Popovich and Manu Ginobili were involved in forevermore changing what is considered possible in basketball…these future NBA fans will shrug and say, “Well, that makes sense.” You may think I’m crazy and that’s fine. I think that I’m one of the last Spurs fans left that sees things clearly. Tonight, I believe that we’re going to start the process of changing what is possible in basketball. Tonight, I believe we’re going to softly gain a rhythm that will crescendo into the loudest “Go Spurs Go” chant in San Antonio history next Sunday. Tonight, I believe we’re going to start the countdown to shocking the world with the most explosive counterattack in the history of the sport. Tonight, I believe we’re going to pick ourselves up from the rubble of a season blown up and nearly destroyed by injuries, grin a grin that strikes fear into the hearts of our cupcake opponent, and start digging for windows.