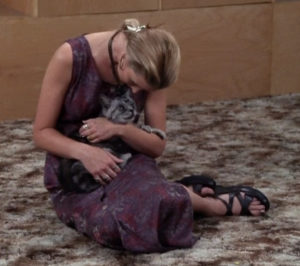 Friends S4:E2 – Hey there, Friends fam. Sorry for the melancholy greeting but it really can’t be helped. Waking up this morning to the news of another deadliest mass shooting in modern U.S. history was so gut-wrenching and awful. In fact, much like Phoebe in the Headline Image we’ve used for today’s post, all I wanted to do this morning was put my head down and pet one of my kitties. I don’t know how many more of these mass shootings we, as a country, should be expected to endure. It is difficult trying to imagine the sheer terror and chaos those innocent concert goers must have experienced last night while trying to enjoy some live music in Las Vegas. It’s almost beyond comprehension to think about what it would have felt like to have been caught in the middle of such carnage. My heart goes out to all of the shooting victims and my hat is off to the first responders and other concert goers who helped in the saving of lives. Also, this is EXACTLY the time to start talking about and fighting for #GunControlNow. Shame on all of us for not having the courage to pass common sense gun reform after Sandy Hook. I’m tired of politicians tweeting #PrayFor_____ after every senseless mass shooting. Excuse me, Mr. and Mrs. Elected Official. Prayer abdicates responsibility to do your job. Relying on it as a reflex in the aftermath of these shootings implies that they’re unavoidable and it is beyond our power as citizens to make better collective choices to avoid or significantly limit them. Do not hide behind faith for absolution. We all know the science says that these tragedies are largely preventable. Therefore, your failure to act after one gives you culpability in the next. Americans, like me, who are fed with the grandstanding and political cover given to the gun lobby so it can continue making money hand over fist profiting off of the sales of weapons and magazines that have no business being sold in a civilized society are watching what you do next. We are watching and we will remember your response to the Las Vegas massacre when we go to the ballot box in 2018, 2020, and 2022. Continue standing with the NRA on the wrong side of history at your own political peril.

So, I had been planning a lot that I wanted to say about today’s episode of Friends. That is, prior to digesting the latest mass shooting. After a day of heartache, it just doesn’t seem to make any sense. I’m assuming that everyone reading agrees. To make matters worse (as if the shooting itself wasn’t enough to absorb) we also learned today about legendary rocker Tom Petty. He was discovered in his home after experiencing a full cardiac arrest. It was first reported that the musical genius had died and therefore I (along with millions of fans around the world) spent the next several hours attempting to process his death alongside the earlier Las Vegas shooting. Later in the day, reports started trickling out that in fact, Tom Petty has not died but has, indeed, been taken off of life support. As of the time that I’m writing (Monday evening), there has not been a second report released of Tom Petty’s death so, as best I can tell, he is still with us. Ironically, the only thing I have for a frame of reference for this bizarre Tom Petty death retraction is Friends S1:E8, The One Where Nana Dies Twice. I think the episodes title makes the connection fairly self-explanatory. Anyway…hang in there, Tom. Your fans are with you. In your own words, “You can stand me up against the gates of hell but I won’t back down.” That’s all I’ve got tonight, class. Tomorrow will be a brighter day. Next week, a brighter week. See you then.

Recap in the Key of Phoebe – This is the one where Monica gets asked out by Chip Mathews (Rachel’s former prom date), Rachel feels uncomfortable about Monica going on a date with Chip but ultimately gives her blessing when Mon explains that she’s trying to retroactively experience what it feels like to be popular in high school, Chandler forces Joey to agree to sell his entertainment center after ripping a suit on it, Phoebe believes the spirit of her mom (Lilly) is reincarnated in Julio the cat, Ross is forced to apologize to Phoebe’s mom (for doubting that her spirit is in fact living inside Julio the cat) in order to show his support for his friend Phoebe, Joey ends up getting locked inside his entertainment center (and getting he and Chandler robbed in the process) while trying to make a sale, and Monica realizes (because Chip is a loser that still hangs out with his high school buddies, still works at the movie theatre, and still live at home with his parents) that it isn’t that great to get a Lipper from Chipper.

Gandalf Gaffes – This may very well go down as the tiniest gaffe in the entire 236 episode Friends series run. Nonetheless, since we have established the precedent that changes in the actor playing a character from episode to episode are considered gaffes, we have one to report from today’s episode. In Friends S4:E2, The One With the Cat, Dan Gauthier plays present day Chip Mathews. However, in Friends S2:E14, The One With the Prom Video an uncredited actor (but clearly not Dan Gauthier) makes the slightest of slight appearance as Chip Mathews when Monica and Rachel are scurrying off to prom in the video in which Ross gets dressed up to take her before realizing that Chip had indeed shown up. Since the uncredited actor establishes who Chip Mathews is for our Friends universe but is clearly not Dan Gauthier, when the latter shows up to play Chip in today’s episode, I’m left with no choice but to book it as a gaffe. This is a level one infraction and may very well prove to be the smallest infraction of all when all is said and done.

Chan Man Quip of the Week – [The Setup] Chandler has come home to discover that Joey is trapped in the entertainment center and their apartment is close to empty. He frees Joey and asks, “What happened?” Joey surveys the apartment and responds, “Awww, man! He promised he wouldn’t take the chairs!” Repeating himself, Chandler asks again, “What the hell happened? How were you locked in? And where the hell is all of our stuff?” Joey begins to explain, “Well, this guy came by to look at the unit and-and he said he didn’t think big enough to fit a grown man!” Dumbfounded, Chandler follows up, “So, you got in voluntarily?” Joey defends himself by pointing out, “I was tryin’ to make a sale!” He then continues, “Oh, man, if I ever run into that guy again, do you know what I’m gonna do?” [The Knockout] Exasperated, Chandler sarcastically responds, “Bend over!”