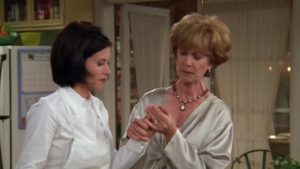 Friends S4:E3 – What it do, Friendinistas. I hope Week 38 of The Resistance finds you well. Leading our efforts this week is a progressive lion who doubles as Secretary of State, Rex Tillerson. In a hardcore resistance move straight out of the Che Guevara playbook, Tillerson called President Trump a “moron” or “f*cking moron” depending on which “fake news” source you want to believe. Despite attempts on the right to delegitimize Rex as a crazy fringe leftist, Tillerson’s credentials for evaluating POTUS are solid as a rock. After all, if anyone is going to know how to identify a gasbag it’s going to be the former head of Exxon Mobile. Talk about “taking on the world’s toughest energy challenges.” Moving right along, let me refrain from wishing you a Happy Columbus Day. After all, in enlightened places (like here Denver, CO) today is no longer Columbus Day but rather Indigenous People’s Day. Imagine that. Some state and local governments have taken it upon themselves to use American ingenuity as a way to convey empathy for the pain felt by native Americans over the imperialistic genocide that’s poster child (for better or worse) is Christopher Columbus. Shout out to Minnesota, Vermont, Alaska, and South Dakota (on the state level) and Berkeley, CA, Portland, OR, Salt Lake City, UT, Austin, TX, and Davenport, IA (to name a few on the local level). Yes, indeedy. The ability of state and local governments to turn a negative into a positive is (small r) republicanism at its finest. Right, Senators Graham and Cassidy? But, I digress… Happy Indigenous People’s Day, everybody!

So, in case you were wondering (this is a Friends blog series after all), I actually have a few observations about today’s episode. First, it probably goes without mentioning but the exchanges between Chandler and Rachel (after Chandler rekindles his fling with Rachel’s boss, Joanna) are… Pure. Comedy. Gold. Could that storyline be anymore hilarious? Even though I’ve seen it a thousand times, I can never get enough of watching Chandler and Rachel problem solve the handcuffing predicament. Second: Is it possible that we’ve been misjudging Joey’s intellectual aptitude since Day One? It’s been diligently established over these past three plus years that Joey is not the brightest bulb in the box. While we all have come to view Joey as one of Friends‘ most lovable characters, one of the things we’ve come to love about him is his simpleminded air-headedness. Today’s episode seemingly calls all of that into question when, after purchasing and reading the Encyclopedia’s volume on the letter V, Joey is able to talk extensively with sophistication about numerous topics that begin with the letter V. Could a) perhaps this mean that Joey is, in actuality, not simpleminded but rather merely a slacker who never asserted himself intellectually? Or b) could Joey’s newly-aquired aptitude for digesting and sharing knowledge in today’s episode perhaps be a Gandalf Gaffe that needs to be scored later in the post? These are two interesting theories but in the end I determined that neither applies. To me, the most logical theory is c) that Joey, as an actor, has the keen ability to memorize vast amounts of information even without the cognitive ability to process intellectually what said information means. We have already seen evidence of this through his work as Drake Ramoray on DOOL. (Spoiler alert: There will also be a key scene later in the series that affirms the validity of this theory.). So to sum up: Joey is who we thought he was and his ability to speak extensively on V-related topics in this episode is not a gaffe but rather the byproduct of the advanced memorization ability he has developed through being an actor. Third and finally, Ross does not have a storyline in today’s episode. In fact, he only has three lines in the entire episode! He appears very briefly in a flashback scene as well during the Central Perk scene near the end but he is not directly involved in any of today’s storylines. I find this fascinating because it is extremely rare for one of the Friends to only appear anecdotally in an episode and not be part of a storyline. As we’ve previously discussed, all six of our Friends make at least an appearance in all 236 episodes of the series. However, Ross’ “mail in” performance of only three lines in today’s episode may in fact be the record for fewest lines of a major character in the entire series run. I think it will be well worth our while for me to continue to monitor the situation and perhaps report back on May 6th, 2024. In the meantime, it probably makes sense for you to check back every single week to make sure there are no further developments on this situation during the interim.

In closing, I don’t think I need to remind anybody that last week was a rough week. During our last convening, we talked extensively about the Las Vegas Shooting along with the shocking news of Tom Petty’s cardiac arrest. As of the moment that Lipper From Chipper was posted last Monday evening, Tom Petty was still with us. While no longer breaking news by any stretch of the imagination, I feel obligated to follow up on where we left things last week by reporting that we learned of Tom Petty’s passing within an hour after posting that evening. I’m sure many of you (like me) are still feeling so many feelings this week over the events of last week: the Las Vegas shooting and the loss of a music icon. Unsurprisingly, these feelings were so dutifully tended to over the weekend by Saturday Night Live. SNL devoted it’s cold open to consoling America by letting Jason Aldean (the artist who was on stage at the Route 91 Harvest Festival during the Las Vegas Shooting) perform Tom Petty’s masterful anthem of resilience, I Won’t Back Down. While I already shared the Tom Petty video for I Won’t Back Down as part of last week’s tribute, Jason Aldean’s SNL tribute is simply magical and well-worth it’s own spotlight. It is included below. RIP to all of the Las Vegas Shooting casualties and RIP, Tom Petty. Late.

Recap in the Key of Phoebe – This is the one where Monica (with Phoebe’s help) caters an event for her mother, Phoebe pumps Monica up after the quiches she made for her mother’s event get ruined, Chandler rekindles his fling with Joanna (Rachel’s boss), Rachel discovers the Chan Man handcuffed in Joanna’s office and makes him an offer he can’t refuse, Joey learns all about anything and everything that begins with the letter V, Ross literally has not storyline, and Mrs. Geller is forced to admit she was wrong when her daughter serves her guests a delicious casserole thereby “pulling a Monica.”

Chan Man Quip of the Week – [The Setup] Chandler is handcuffed to the desk chair in Joanna’s office. Lacking the ability to use his hands, he uses his nose to summon Rachel into Joanna’s office over the intercom. After Rachel angrily strolls in, Chandler pleads, “Okay, here’s the situation. The keys to the cuffs are on the back of the door. Could you be a doll and grab them and scoot on over and unlock me? And on a totally different subject, that is a lovely pantsuit.” Ignoring all of that, Rachel reminds Chandler, “You promised you would break up with her.” Chandler counters, “I did break up with her! She just took it really, really well!” Still angry, Rachel questions, “And the fact that you were jeopardising my career never entered your mind?” Chandler answers, “It did enter my mind! But then something happened that made it, shoot right out.” Unmoved, Rachel informs him, “Ya know what Chandler? You got yourself into those cuffs, you get yourself out of them.” [The Knockout] Clearly panicked, Chandler cries, ” No-no-no-no-no-no-no!! I can’t get myself right out of them! You must have me confused with the Amazing Chandler!!”