I Wanna Quit the Gym 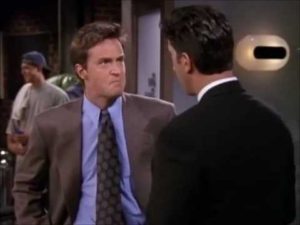 Friends S4:E4 – Happy Monday, Friendsters! Hope everyone had a more relaxing weekend than me. Since (if you’ve read this blog series for any amount of time) you know that I really enjoy my down time, you can probably guess how annoyed I was when Ted James (Editor-in-chief of the blog, in other words…my boss) called theLeftAhead’s entire staff into a weekend-long strategy meeting here at our central offices in Denver. Given that I typically work only one day a week, I’m sure you can imagine how hard it has been on me to have been working for not one, not two, not three, but four consecutive days. Of course, they don’t pay me the small bucks for nothing, right? (Oh man, I’m probably going to pay for that comment later…no pun intended.) On second thought, maybe I won’t. After all, Mr. James said in our ridiculously unnecessary meeting over the weekend that he will be preoccupied during the early part of this week trying to finish his final Black & Silver post from last season prior to the San Antonio Spurs tipping off the new season on Wednesday night. Adding to my chances of getting away with trashing my boss is the fact that Gregg Popovich (head coach of theLeftAhead’s beloved Spurs) excoriated President Trump for the umpteenth time today. I’m sure Mr. James is so enthralled with adding Coach Pop’s political musings to his own column, he’s going to have little interest in reading mine. I guess we’ll know for sure next week, when I let you know if I am writing again under official reprimand. Stay tuned.

Speaking of staying tuned, for those of you who have been keeping a close eye on holding me accountable to my promises from prior posts…I’m making good tonight on a one I made in Fine By Me to kick off Season Four. While covering JAY-Z’s video for Moonlight in that post, I promised to bring you more examples of Friends references in pop culture that took place during our summer hiatus. Given that today’s episode is the one where Chandler wants to quit the gym, I have a perfectly fitting pop culture reference to cover tonight from the hilarious Broad City. The Friends reference, ironically, takes place in the Broad City Season Four premier and features a cameo from Shania Twain (don’t call it a comeback). In the scene, Abbi and Trey are training Shania Twain when Shania asks them, “Can we stop? She continues by informing them, “I just, honestly I just want to go home and watch Friends.” Hilarity ensues as the Broad City characters inform us which of the Friends characters they most identify with. We even get a Ross Geller impression from Trey! So, considering that I’m fed up for having worked four days in a row and hopefully my boss won’t notice, I’m mailing in the rest of today’s post but not before giving you a Broad City inspired homework assignment. The question you need to answer, class, is, “Which FRIEND R U?” I’ll be eagerly awaiting your answers in two weeks on Halloween. Until then.

Which ~FRIEND~ r u and also will we ever recover from that impression!! pic.twitter.com/MACoz3YD74

Recap in the Key of Phoebe – This is the one where Chandler brings Ross to his gym as emotional support during his attempt to cancel his membership, Rachel gets upset and cries after Mr. Treeger criticizes her, Joey tries to tell Treeger off for making Rachel cry and ends up putting Monica and Rachel at risk of getting evicted, Monica demands that Joey fix things with Treeger which in turn forces Joey to become Treeger’s dancing partner, Phoebe bites Rick (a massage client that she has a crush on) on the buttocks, and Ross ends up opening a joint checking account with Chandler to pay for the membership he started after Chandler had told him, “I want to quit the gym.”

Chan Man Quip of the Week – [The Setup] The gang is at Monica and Rachel’s apartment having breakfast, Chandler is cleaning out his old wallet, and Rachel is still upset from getting chewed out by Treeger. Joey asks Rachel, “Whoa, whoa. Treeger made you cry?” Still visibly flustered, Rachel responds, “Yes! And he said really mean things that were only partly true.” Enraged, Joey informs the room, “I’m gonna go down there and teach that guy a lesson.” Monica interjects, ” Joey, please don’t do that. I think it’s best that we just forget about it.” Rachel responds to Monica as Joey reconsiders confronting Treeger, “That’s easy for you to say, you weren’t almost just killed.” After hearing Rachel’s response, Joey starts walking to the door saying, “All right that’s it, school is in session!” After Joey slams the door, Monica turns her attention to the contents of Chandler’s old wallet and asks him, “My God! Is this a gym card?” [The Knockout] Deadpan, Chandler responds, “Oh yeah, gym member. I try to go four times a week, but I’ve missed the last 1200 times.”