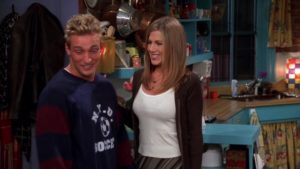 Friends S4:E5 – Trick or treat, smell my feet, give me something good to eat. Happy Halloween Eve, girls and boys! How’s everybody doing on this fine Monday morning? How am I doing? Well, golly gee…thanks for asking. Personally, I’m a little sleepy after staying up late to watch an all-time classic roller coaster of a World Series game last night. And, I’m sure you can guess that (as a native Texan) I was ecstatic to witness the Houston Astros prevail 13-12 over the Los Angeles Dodgers in yesterday’s 10-inning heavy weight slugfest and, in so doing, take a three games-to-two lead in the series. If the Astros are able to capture Houston’s first ever World Series championship this year, it will be extra special for the community in the aftermath of Hurricane Harvey (one of the most devastating storms in American history). After the two teams catch their breath today, the series resumes back in Los Angeles on Halloween where the Astros will have two chances to win one game that, if captured, would complete their #HoustonStrong march through the postseason and finish the job of adding a little bit of joy during challenging times for thousands of victims in East Texas. Go Stros!

Now to our business at hand. I’m sure many of you are wondering whether or not I’m facing any discipline this week after my “they don’t pay me the small bucks for nothing” comment directed at Ted James (my boss) during my last post, I Wanna Quit the Gym. I’m happy to report that, as I predicted, Mr. James was too busy working on Ocho Derrotas to have even noticed. I’m free and clear and still very much suspension-free in 2017. (Here’s the part where I press my luck.). Much like Joey’s preoccupation with Kathy in today’s episode, Mr. James is so obsessed with his own love affair (the Spurs) that any time he is in Spurs-mode, I can get away with bloody murder when it comes to my unrequited crush (TV’s the Friends). To further demonstrate the point that Mr. James is completely oblivious to the goings-on of Friends 20/20 when he’s in Spurs-mode, if he asked me to explain to him my passion for this column’s subject matter, I could go up to him and say, “Okay, Ted, what do you say I go over there and say how much I like Friends? No, no it’ll be good. I can tell Friends how much I’ve been thinking about it. That I haven’t stopped thinking about hit since the moment I discovered it. That I’m so fantastically, over-the-top, wanna-slit-my-own-throat in love with Friends, that for every minute of every hour of every day I can’t believe my own damn bad luck that you met the Spurs first!!” And how would he respond? You guessed it.. “Well, that’s pretty good. But you might wanna tone it down a little.” If you actually read this week’s column, Mr. James, before you get pissed, see how I tied into today’s subject matter as a metaphor? 🙏

Finally, I know we’ve been off for two weeks, but if my memory serves me correctly, I seem to remember assigning a little bit of homework during our last convening. When last we saw each other, we parted with the question, “Which FRIEND R U?” Pass your answers to the front, class. I’m excited to see which FRIEND people identify with the most. [Long pause while I shuffle through the papers.] Okay, it looks like the results are in and we have 14 Rachels, 12 Chandlers, 11 Phoebes, 10 Joeys, eight Monicas, and four Ross’s. It is not surprising to see Rachel and Chandler take the prize for female and male FRIEND that the most people identify with. This seems to follow international trends to a tee. Okay, now that that is completed, moving right along….wait, what’s that? You want to know, “Which FRIEND R Ken Adams?” Come on, class. Isn’t is obvious. I’ll give you a hint. My name says it all. To be fair to those students who are discovering Friends for the first time in real time with us as we move through the series, my name won’t register as a clue. So, I’ll give you another hint. My theLeftAhead profile picture says it all as well. In case that wasn’t a dead giveaway, you have my permission to skip ahead and quickly review Friends S8:E4, The One With the Videotape. So that settles it. Now, for this week’s homework I want each and every one of you to go out to a party tomorrow night dressed as your favorite FRIEND for Halloween. You will be expected to present video evidence when we reconvene next week. In the words of David S. Pumpkins, “Any questions?” 🎃🎃🎃

Recap in the Key of Phoebe – This is the one where Rachel dates Josh (an NYU Soccer Frat Bro) to get back at Ross for claiming to be dating Amanda (in an attempt to make her jealous), Chandler asks out Kathy (a woman he sees at Central Perk) only to find out that she’s already dating Joey, Phoebe discovers that being sick gives her a sexy bluesy voice when she’s performing, Monica catches Phoebe’s cold, Joey gets upset with Chandler for not making an effort to get along with Kathy, Ross ends up becoming Amanda’s babysitter, and Rachel discovers Josh is stealing from her after he tells her, “I’m gonna head.”

Chan Man Quip of the Week – [The Setup] Chandler is awkwardly hitting on Kathy at Central Perk after Monica had pumped him up to have the courage to ask her out. Realizing that Chandler is hitting on her, Kathy sarcastically observes, “Wow! You are really good at this.” Chandler responds, “Hey, come on, give me a break, I’m out on a limb here.” Feeling guilty, Kathy offers, “I’m sorry, you’re right, I apologize, but I should tell you that I’m waiting for a date.” Chandler turns only to see Joey entering Central Perk as Kathy continues, “Oh, and there he is now.” Walking over, Joey says, “Hey.” Chandler forces an embarrassed, “Hey! Hey, hey-hey, hey,” in response. Noticing that Kathy and Chandler are talking, Joey asks, “Hey, I see you guys already met, huh?” [The Knockout] Still flustered by the sudden turn of events while simultaneously displaying his patented sarcasm, Chandler responds, “Yes-yes, I was just trying to figure out a way to uh, demonstrate how I could get my exceptionally large feet into my even bigger mouth.”