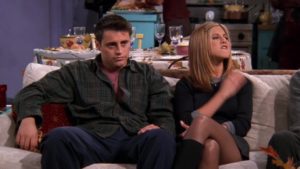 Friends S4:E8 – Happy Thanksgiving Eve Eve Eve, girls and boys. Everybody settle down. I know we’re all anxious to get on to our holiday weekend and our two-week break from class, but we’ve got some important business to attend to prior to shifting into turkey-mode. As you all know, I have your Halloween “Which FRIEND R U?” video assignments graded and (drum roll please) every single last one of you made an A. That includes you, Johnny…although, choosing Gunther was quite risky. I won’t lie. I was contemplating failing you for it until I saw the footage of you going out to a party dressed as Gunther dressed as Charlie Brown. Even though Gunther is not one of the FRIENDS and therefore technically I should’ve failed you, the creativity and imagination that you brought to the assignment won me over. So congratulations, Johnny! And congratulations, class! You all get to leave for the Thanksgiving break with the warm and fuzzy feeling of having aced your last assignment!

While you’ve guessed correctly that the impending break has made today’s post ripe for the “mail in” treatment, before we go…just a couple of quick points about today’s episode. First, how great is Va Fa Napoli? I’m trying to decide if I like watching Joey and Rachel say this with the accompanying “hand under the chin” gesture more or Ross and Monica’s gesture that was revealed to us just three episode ago in Friends S4:E5 (you know what I’m talking about, right? The Geller gesture for giving the finger without actually having to give it?) more. This is a close call but I guess I’m going to have to give a slight edge to Ross and Monica’s “giving the finger” gesture for the simple reason that it gets brought back multiple times in future season of Friends. Secondly, how about the scene where Chandler (while in the box) refuses to say anything to Kathy as she’s breaking up with him in order to prove to Joey how much their friendship means to him? This moment between two best buds gives me goosebumps every time (especially when Joey ultimately forgives Chandler and begs him to go after Kathy). And now, boys and girls, I can’t think of a better way to wrap this up and mail in the post than to end on that happy Thanksgiving note. I hope each and every one of you has a fantastic Turkey Day! I’ll catch you on the flippity flop. Gobble gobble.

Recap in the Key of Phoebe – This is the one where Joey contemplates moving out of disgust with Chandler kissing his girlfriends, Monica invites Richard’s son to Thanksgiving after seeing him for an emergency eye appointment, Phoebe gets drunk with power when she’s left in charge of the kitchen after Monica goes to the eye doctor, Ross gets angry with Rachel for being devoid of sentiment, Rachel proves to Ross she’s not devoid of sentiment by showing him her box of keepsakes from their relationship, Chandler goes in a box to show Joey how much their friendship means to him, and Joey ends up forgiving Chandler and giving him his blessing to date Kathy after earlier telling him, “Va fa Napoli!”

Chan Man Quip of the Week – [The Setup] The gang sans Joey are at Monica and Rachel’s preparing their Thanksgiving meal. Monica is fiddling around in the refrigerator when she asks in frustration, “What is wrong with this freezer?” She continues rummaging around before screaming out in agony, “Ow! Ow!” Concerned, Phoebe quickly asks, “God, what happened?” Monica responds, “Oh my God, ice just got in my eye!” Rachel emerges from her room (where rather than helping, she had been taking a Thanksgiving nap) and angrily informs, “People are trying to sleep in here!” Chandler fills in Rachel on the emergency at hand by telling her, “Monica got ice in her eye, and it hurts.” Tending to Monica, Phoebe directs her, “Open it up, let me see.” Monica responds, “Oh, ya know what, I can’t. It really kills.” [The Knockout] Unable to resist an opportunity to be sarcastic (even under these circumstances), Chandler suggests, “Well maybe you should put some ice on it.”