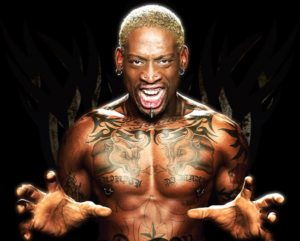 Friends S4:E9 – “Okay, Chandler. See you tomorrow.” Mike hung up the phone and headed from his courtside seat into the United Center tunnel thinking to himself, “What a dominating win by my Bulls over our arch-rival Knicks. Isn’t it ironic (don’t you think) that I have an early morning flight to New York tomorrow to party with my college bros. After all, they are Knicks fans. I’ll have to rub it in when I get there.” As Mike continued walking back through the tunnel to the VIP parking lot, he intentionally kept his eyes straight ahead to avoid getting roped into conversations with his season ticket holder acquaintances as they shouted things at him like, “Hey Gandalf” and “What a game, Wizard” as he passed by. He responded with things like, “Just another night at the office for M.J.” and “You can’t stop His Airness” while trying to avoid eye contact. Mike knew that he needed to go straight home and get some rest before his early morning flight and he also knew that any amount of engagement with his fellow Bulls fans put him at risk of being sidetracked and roped into a night on the town.

He was almost through the tunnel and into the VIP garage when he heard a familiar voice behind him. “Gizzy the Whizzy!” He knew that the unmistakable voice he heard behind him belonged to none other than Bulls starting power forward Dennis Rodman and he further knew that that being the case, there would be no avoiding this conversation.

He turned back and said, “Worm, great game.”

“Thanks, Gandalf! No biggie. It was just the Knicks. Yo, I was wondering what you’re getting into tonight?”

Flattered and intrigued, Mike thought to himself, “Wow, is Dennis asking me to hang out after the game? That would be a first. Maybe he’s finally caught wind of my reputation as a world-class party animal. Bursting with curiosity, Gandalf responded, “I don’t have any plans, Dennis. Why, what’s up?”

“Well, I’ve been hearing rumors that you’re a world-class party animal and I wanted to invite you out to see if the rumors are true. Come on, follow me over to the players’ parking lot. I’ve got my Ferrari waiting.” Dennis turned and started walking back through the tunnel to another exit.

Beaming with excitement, Gandalf complied and started following Rodman to the players’ parking lot. As if in a trance, he watched Dennis jump into a yellow Ferrari and so he effortlessly hopped into the passenger side right behind him. Thoughts of his early morning flight to New York and hanging out with his college buddies, Chandler and Ross, were already miles away from his mind. Once comfortably seated in the Ferrari, Gandalf pulled out his flask and motioned it over to Rodman in the driver’s seat. Without speaking, Rodman accepted the flask and took a swig that must’ve been the equivalent of four shots. As Dennis handed it back, Gandalf managed to mutter, “Nice ride” before taking the flask to his own mouth to try to match Rodman’s four-shotter.

Dennis responded, “If you like the way she looks, you’re going to love feeling her speed.” The Worm abruptly gunned the engine, peeled out of the players’ parking lot and started darting through the streets of Chicago.

“Where are we going?” Gandalf asked this as he saw the speedometer hit 135 mph. Not knowing what else to do, he rolled the window down to let the wind whip his hair and started trying to light a cigar.

“Naw, save that…try one of mine.” Rodman handed him a cigar from the center console and continued, “We’re going to O’Hare. Madonna has her private jet waiting.”

Gandalf accepted Rodman’s cigar, lit it, inhaled a huge puff, realized that this wasn’t “just” a cigar, started laughing and, without warning, abruptly started serenading Dennis with his own rendition of Like a Prayer.

Rodman looked over at this spectacle with a smirk and said, “I like your sense of humor. I can already tell this is going to be a good night.” Hearing this, Gandalf’s headed started to spin with euphoria.

As if in a dream, he watched as they pulled up on the tarmac at O’Hare to a pink, blue, and gold private jet that could only have been Madonna’s plane. As Gandalf got out of the car, he did a double take because, and maybe this was his mind playing tricks on him, but there appeared to be a giraffe’s head sticking out of the open door of the plane. As he followed Dennis from the Ferrari toward the plane, he realized that yes, in fact, that was a giraffe on board Madonna’s plane. Still tripping on the giraffe thing, he entered the plane behind Rodman only to see Madonna (along with about 27 other people) on board. She turned to the new arrivals and asked Dennis, “Did you bring him?”

Rodman answered, “Yes, I present to you…Gadalf the Wizard.”

Gandalf pumped his hands in the air victoriously as the gathered masses on the plane erupted into applause. He asked, “Who’s ready to party?” and promptly handed his cigar and flask to a couple of goth farmers who were making out to his left. And that, ladies and gentleman, is the last thing Mike “Gandlaf” Ganderson remembered from the night he partied with Dennis Rodman and Madonna.

The next morning, Gandalf woke up in nothing but his boxers only to realize he was in the waiting area of a Jiffy Lube. The business did not appear to be open yet because no one else was around. He looked at the clock on the wall and it suggested that it was 5:30 am. Funnily, as he looked through the windows to the world outside, he noticed it was completely bright out. Confused, he looked behind the counter to see a sign that said, “Anchorage’s Quickest Oil Change.” He thought to himself, “How the hell am I in Anchorage, Alaska?” He then noticed an eight inch stiletto shoe with what seemed to be a note stabbed through the heel sitting on a cash register sitting on the counter hovering above him. Gandalf drug himself to his feet while finally noticing that his head was pounding. He grabbed the note and read:

Sorry, Bro. We had to take off for Europe. Madonna has a concert in Paris tonight. I have to hand it to you, though. You are the biggest freaking party animal that I’ve ever met in me entire damn life. World-class is an understatement. That was the craziest night ever. Keep doing you.

Mike “Gandalf” Ganderson rubbed his eyes some more and then, spotting a pay phone, picked up and dialed. The voice at the other end answered, “Hello? So, are you in town?”

Recap in the Key of Phoebe – This is the one where Ross and Chandler take a day off from work because they are going to party, Joey is suspicious of the college friend that Ross and Chandler want to party with, Monica gets a van with Phoebe for their catering business right before she gets offered the position of Head Chef at Allesandros (an Itailian restaurant that she gave a bad review), Phoebes decides to let Monica take the job as Head Chef even though she does’t know what to do with the van, Rachel gets promoted to Assistant Buyer the day before Joanna passes away, and the guys end up realizing that they’re too old to party like they did when they were 21 and hanging out with Gandalf the Wizard.

Gandalf Gaffes – It’s only fitting that we have a Double G during the namesake episode. Full disclosure, the gaffe comes during the extended DVD footage (you won’t find it in the broadcast version of the episode). It’s also a very subtle gaffe but luckily, you’re working with the greatest Gandalf Gaffe sleuth this side of the Mississippi. So here’s the setup: In the episode’s opening scene, the gang is standing out on the street admiring Monica and Phoebe’s new van. Rachel makes the comment, “Oh my god! I think I lost my virginity in that van.” Sounds reasonable enough, right? Well, here’s the problem. In Friends S1:E7, The One With The Blackout, the gang is killing time during the blackout by discussing the weirdest places each of them has ever had sex. When it comes time for Rachel to divulge hers, she pretends that she’s already gone before finally revealing that the weirdest place she’s ever had sex is, “The foot of the bed.” I think by any standard, loosing one’s virginity in a van is a weirder place to have sex than the foot of the bed. Therefore, Rachel claiming to have lost her virginity in a van in this episode is a gaffe since we learned in Season One that Rachel had never had sex anywhere other than in a bedroom. I know, I know, this is a minor level one infraction but it’s also a hell of a catch, right?. One quite worthy of being the gaffe in the namesake episode!

Gandalf Gaffe #17: In the episode’s opening scene (extended version), Rachel says, “Oh my god! I think I lost my virginity in that van.” However in Friends S1:E7, The One With The Blackout, Rachel claims the weirdest place she’s ever had sex is, “The foot of the bed.”

Chan Man Quip of the Week – [The Setup] Ross and Chandler are sitting around moping at Chandler and Joey’s apartment after finding out that Gandalf didn’t make it into town to party with them. Joey comes in after returning from an audition surprised to find them there. After they tell him what happened, Joey pumps them up to go out partying anyway by saying, “We’ll do it all, and better! Look, after tonight, Gandolf will want to party with us, dude! Come on!” Ross and Joey exchange “Yeahs” before Ross, seemingly trying to convince himself, says, “It’s not like we don’t know how to party!” Joey responds, “Yeah! All right? Let’s go!” Chandler hopefully chimes in by asking, “And maybe we could end up on a boat again?” Ross and Joey answer in unison by saying, “Yeah!” Chandler, jumping on board, exclaims, “All right!” Turning to Chandler, Ross asks, “Hey-hey-hey, when uh, when were we on a boat?” Chandler responds by asking, “Remember that really cold morning, you woke up and those dogs were licking your face?” Ross answers, “Yeah.” [The Knockout] Chandler, practically rolling his eyes, tells Ross, “Well, those were seals, man.”

Subscribe to this author's posts feed via RSS
In category: Friends 20/20, Pop Culture
Tags:Dennis Rodman , Friends , Madonna , The Lord of the Rings