Christmas Will Be Snowy 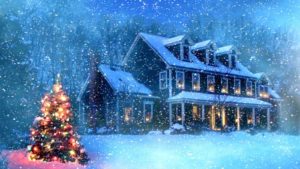 Friends S4:E10 – ‘Tis the season, Budolph the Friend-nosed Reindeers! How is everyone doing this fine December Monday? If you haven’t noticed, I’m in quite the festive mood. Not only ’tis it the season, ’tis also our last convening in the Year Of Our Lord 2017. And what a crazy, whirlwind year it’s been. We’ve organized a Friendinistas resistance to the presidency of Donald J. Trump, fought our way through the break up of Ross and Rachel, delved repeatedly into fan fiction, found out that one of your fellow classmates, Johnny (wake up, Johnny…I’m talking about you) is a bonafide, albeit gifted, psycho-path, and most importantly (and I cannot not stress the most importantly enough)…we’ve gotten through another year where I’ve managed to avoid getting fired while putting forth the least amount of effort possible and spending forty percent of my time on a beach (my life rules). So, yes, my little elves, given that I can basically get away with murder at theLeftAhead offices and still keep my job…you guessed it. YOUR. HOLIDAY. GIFT. THIS. YEAR. IS. THAT. THIS. POST. WILL. BE. A WORLD-CLASS. MAIL-IT-IN. EXTRAVAGANZA.

YOU. ARE. WELCOME. And given that we’ve all agreed to end class a tad bit early today, the only thing I want to discuss is Phoebe’s holiday song. Please open your Phoebe Buffay Hymnal to page 38 and let’s begin with a D note in C minor. Yes, my reasons for wanting to discuss Phoebe’s holiday song are threefold. 1) It just wouldn’t be the holiday season without a full-blown revisiting of this paradigmn-shifting masterpiece 2) We have a very decent chance in my neck of the woods at a White Christmas this year and 3) let’s be honest, having an embedded video of Phoebe’s Holiday Song with accompanying lyrics does a lot of the heavy lifting that will allow me to (say it again with me class) MAIL. THIS. POST. IN.

Regarding point number one, I love Phoebe’s Holiday Song. My wife and I sing along every single time this episode plays (which is often, since we navigate our way through existence by living in the Friends Vortex). In fact, this time of year, we often find ourselves singing Phoebe’s Holiday Song even when we’re not watching Friends. It is simply that good. Along with Alanis Morisette Zack De La Rocha, Kurt Cobain, Christopher Wallace, and Tupac Shakur, Buffay proves with this gem that she was one of the top song writers of the 1990’s.

Regarding point number two, every time I hear Phoebe sing the line, “Please tell Joey Christmas will be snowwwwwy,” I find myself yearning for it to be snowy wherever I’m celebrating Christmas. Being a native Texan, this wish was often a pipe dream. However, now that I live in Denver, Colorado…the proposition has improved to forty -sixty. Looking ahead at the weather report, it appears this year that my wish may in fact be granted considering that we have snow storms this Wednesday and Saturday on our ten-day forecast. If temperatures remain cold enough throughout the week, I may be toasting Phoebe Buffay and Joey Tribianni this time next Monday for making my White Christmas dreams come true.

Went to the store, sat on Santa’s lap
Asked him to bring my friends all kinds of crap
Said all you need is to write them a song
Now you haven’t heard it yet so don’t try to sing along
No don’t sing along

Recap in the Key of Phoebe – This is the one where Phoebe is working through the lyrics of a holiday song that she’s writing for her Friends, Monica is being hazed at work so she comes up with a scheme to hire and fire Joey in order to assert her authority, Rachel is bummed to be alone during the holiday season so Chandler offers to set her up for a fling with a guy from his work, Ross dates two women (one he really likes that lives in Poughkeepsie and one that he’s lukewarm on but lives uptown), and Phoebe performs the final version of her song at Central Perk and receives roaring applause since her lyrics informed Joey that “Christmas will be snowy.”

Chan Man Quip of the Week – [The Setup] Rachel, Phoebe, Joey and Chandler are at Central Perk and Rachel is complaining about being alone for the holiday season and wishing she were with somebody. She informs the others, “I mean, it doesn’t even have to be a big relationship, y’know, just like a fling would be great.” Surprised, Chandler responds by asking, “Really? I didn’t think girls ever just wanted a fling.” Rachel answers, “Well, believe me, it’s been a long time since I’ve been flung.” Joey interjects, “Well, I know what I’m giving you for Christmas.” Trying to be helpful, Chandler asked Rachel, “Y’know what? There’s some nice guys at my office, do you want me to set you up?” Rachel answers, “Yeah,” then proceeds to ask him, “Wait a minute, it’s been a long time that I’ve been single. How come you never offered this before?” In a rare moment of brutal honesty, Chandler reveals, “Well, I have a girlfriend. I’m-I’m happy. So, I no longer feel the need to go out of my way to stop others from being happy.” Moving right past that, Rachels says, “Okay! No accountants. Oh, and no one from like legal. I don’t like guys with boring jobs.” [The Knockout] Chandler, visibly amused, asks Rachel, “Oh and Ross was like what? A lion tamer?”