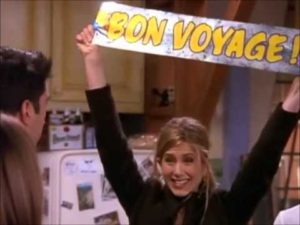 Friends S4:E16 – [Begin Transmission] [Alien Voice] Greetings, Earth Friendlies. This is Zooperkroll, Supreme Leader of the Infini. My species is from the planet Visonia. Visonia is located 37 trillion miles away from Earth in the Milky Way’s Norf system. I am writing to inform you that we have abducted your Friends 20/20 blogger, Ken Adams, and are currently conducting experiments on him in outer space. Because of this prior engagement, Ken Adams asked me to pass along the following message: “Regretfully, I will not have time to write a proper blog post this week and must, therefore, mail in this week’s column.” He anticipates that you will respond by asking, “How will you mail in your column from space?” His answer is, “I’m not entirely sure but I assume President Trump’s Space Force is already up and running and will be happy to deliver the message back to Earth.” He further anticipates that you will ask, “If President Trump’s Space Force is up and running, how were the Infini able to get past the greatest space troops the universe has ever known (believe me) to abduct you in the first place? His answer is, “Supreme Leader Zooperkroll and the Infini worked with Vladimir Putin and Russia to abduct me and, well, you know the rest of the story by now…” [Still in Alien Voice] Now that you have heard Ken Adams’ message we must return to our experiments and bid you fare…wait…what…uhh, okay, hold on. Ken Adams asked me to deliver another message on his behalf. Lucky for him, the gravitational pull of your planet creates a massaging sensation for my brains and temple, so I’m feeling generous. His next message is as follow: “Can you believe how pathetic Rachel Karen Green is in this episode? And for Joshua? Is it just me, or is Joshua kind of a big dull dud? Anyway, back to Rachel being pathetic. Rache, from not letting Joshua put his hands in the pockets of the jacket he trying on, to telling him your “pick up” note is an anti-theft device, to throwing the fake bon voyage surprise party for Emily that’s really for Joshua, to changing dresses mid-party, to choking on a cherry stem after gloating about your tongue-tying skills, to making everybody play Spin the Bottle like middle school children, to dressing up like a cheerleader and busting your lip doing a cheer? For God’s sake Rachel, watching your desperation to be with Joshua in this episode is a train wreck. On second thought, it is more than a train wreck, it’s physically uncomfortable to watch. Not only are you the biggest loser of this episode, your behavior in this episode alone puts you in the running for biggest overall loser in Friends series history. It was that bad but, in the end, jokes on me, right? After all, you got the guy.” [Don’t forget that Alien Voice] I don’t see how analyzing the behavior of a fictional character from 20 years ago is relevant to anything. Why would Ken Adams request me to deliver this message to you all? Human are a very strange lifeform and Ken Adams is unquestionably the strangest among you. Now you see why we are doing experiments on him. As I was saying before he asked me to deliver to you that bizarre Rachel Green rant, farewell Earth…dude, come on. I’m not gonna…how could it…fool me once…OKAY. Ken Adams has requested that I send you one final message. I have reluctantly agreed to deliver the message as my way of bidding you adieu. Before I give you Ken’s final message, let me inform you that I, Zooperkroll, Supreme Leader of Infini, have not only come to Earth to do experiments on Ken Adams but also to ask for your vote in the upcoming 2500 intergalactic election. Let’s Make the Milky Way Great Again! To prove to you that I am serious about earning your intergalactic vote and since I will be hovering above the planet doing experiments on Ken Adams anyway this week, I will also be beaming down on Saturday to attend the March for Our Lives. I’ve never understood why Earthlings from the United States of America would put the profits of gun manufacturers ahead of the safety of children. Most systems in the Milky Way have sensible gun regulations and we should make our voices heard on Saturday to make sure Earthlings from the U.S. follow suit. Please join me and the Stoneman Douglas students on Saturday to tell Earthling politicians from the U.S. that enough is enough and they will either take action to say #NeverAgain or they will be voted out of office during Election 2018. With that being said, Ken Adam’s final message is as follows: “The Infini and my alien abduction are real and not just a shameless attempt at setting a new bar for excellence in the category of Friends 20/20 Mail-In Specials. Just wanted you to know that before Zooperkroll sticks another needle in my eye. Bon voy see ya!” [End Transmission]

Recap in the Key of Phoebe – This is the one where Ross plans his perfect farewell date with Emily but Rachel ruins it by throwing an impromptu surprise party for Emily that is really for Joshua, Phoebe’s pregnancy starts making her crave meats, Joey volunteers to stop eating meats while Phoebe is pregnant so that she can satisfy her craving without any extra animals paying the price, Chandler uses a rubbish English accent every time he is around Emily, Monica shows Emily pictures of Ross at Computer Camp during Emily’s surprise going-away party, and Rachel manages to seduce Joshua after making a fool of herself even though it costs Ross getting to take Emily on the perfect date as his way of saying, “bon voyage.”

Chan Man Quip of the Week – [The Setup] The gang and a few guests are at Monica and Rachel’s apartment for Emily’s bon voyage surprise party that’s really for Joshua. When Ross and Joshua start getting antsy to leave, Rachel entices them to stay with the “whole big thing planned” which turns out to be Spin the Bottle. During the game, Joey and Emily land on each other three consecutive times which prompts Ross to say, “Okay, that-that’s enough! Ya know, let’s, let’s let someone else play.” Put out by Ross spoiling his fun, Joey responds, “If you didn’t want to play, why did you come to the party?” Not allowing things to get any tenser between Joey and Ross, Chandler interrupts by offering, “All right. I’ll go. I’ll go.” As he begins spinning the bottle, he narrates, “Somebody loose. Somebody loose.” The bottle spins around several times and then lands pointing right back at him. [The Knockout] Like a sad puppy dog, Chandler admits, “Story of my life”