I’ve Finally Got My Band 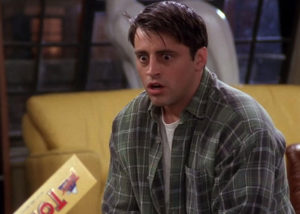 Friends S4:E17 – Knock, knock. Who’s there? PORN!. What’s happening, Mercedes Friends? The strangest thing happened to me last week. I went to bed last Sunday night and the next thing I remember, I was waking up and it was Tuesday morning. I panicked, thinking I had slept for over 24 hours straight and had missed the deadline for Friends S4:E16. (And you can imagine how awful I felt about ruining my perfect record of posting every single Friends 20/20 post on time ?.) When I logged onto the blog, however, I saw my post was there even though I had no recollection of writing it. Utterly confused, I showered, got dressed and rushed over to theLeftAhead office for answers. The first person I saw was (of course) my boss, Ted James. I got him up-to-speed on what I knew of what had happened so far and he responded, “Dude, you woke up and saw that you had posted a Friends 20/20 post that you had no recollection of writing and you didn’t bother to read it?” At that point I realized that I had just verified that it was posted and hadn’t bothered to actually read it before rushing to the office. Feeling embarrassed about this little detail, I attempted to lie my way out of the embarrassment by responding, “Of course I read it.” Ted immediately called my bluff by telling me, “No you didn’t.” He proceeded to ask, “You want to know how I know you didn’t read it?” Without giving me time to respond he answered himself, “Because if you had, you would know what happened to you.” Knowing that there was no salvaging my lie at this point, I grabbed my phone out of my pocket and read the post. After finishing, I looked up from my phone utterly confused and terrified to see my boss across the room laughing hysterically. In between violent attacks of laughter, Ted managed to blurt out, “Aliens, bro. You wanted me to hire more Pop Culture writers and give you help with Friends 20/20? Looks like you’ve finally got your band! I have every confidence that you, Zooperkroll and the rest of the Infini will make an excellent team.” After another moment or two of laughter, he collected himself, looked over at me, and asked, “What’s the matter? You look a little green. Do you need me to call you a Relaxi Cab?” Then he left the room giggling under his breath. Have I ever mentioned that Ted James is a jerk?

Speaking of finally getting your band, how about the one million musicians who joined the Stoneman Douglas Band to perform Twisted Sister’s We’re Not Going to Take It on Saturday? The turnout across the globe was spectacular and being there in person (as I was at the March for Our Lives in Denver, CO) was beyond inspirational. THIS IS WHAT DEMOCRACY LOOKS LIkE. I can’t say enough about the bravery, composure, and resolve of the Stoneman Douglas students. And because I can’t say enough about them (or #EnoughIsEnough enough), I’ll let them speak for themselves. I have posted the efficacious speech that Emma Gonzalez delivers in Washington D.C. on Saturday below. Enough said. See you next week.