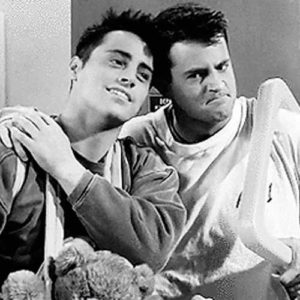 Friends S4:E18 – What is good, Nation of Friends? Good to be back with you this week for another time machine dissection of an episode of the GOAT sitcom that’s been 20 years in the making. I think I’m fully recovered now from coming down with an alien abduction two weeks ago (thanks for asking) and, since you, the devoted fans, know me as well as you do, you know I’m Ready Player One to tear through writing this column and get it mailed in so I can skip out of the office early and head home to get ready for the NCAA National Championship game tonight. Since I have family ties to the state of Michigan, I’m especially excited about tonight’s game. Sports are just more fun when you have a strong rooting interest. Go Blue! Speaking of family ties, could combining the names of those best buds Chandler and Joey (who are so close they are practically family) be anymore freaking Chanoey? Watching them compete to be the one that Phoebe names one of the triplets after is one of my all-time favorite Chanoey storylines. I love the scene where Chandler is brainstorming a new name and proposes Clint but Joey and Phoebe counter with Gene. And how about how the whole hating his name and wanting to change it exercise turns out to be a ruse to convince Phoebe to name the baby Chandler and in the process beat Joey? Spectacularly played, Chandler Bing, I mean Bing, I mean The Artist Formerly Known as Mr. Bing.

It’s fitting, too, that our good friends the Chick and the Duck have a prominent role in this episode we’re dubbing Chanoey. By the way, what is up with Rachel’s bae Joshua being scared of farm birds? Talk about a weird fear. I know, I know. In Rachel’s mind at least the rest of Joshua’s personality is imPECKable. ??? (You see what I did there? Take that, kid who got accidentally launched into space in one of the most unrealistic movie plots ever.) [Stay tuned for a shameless Space Camp reference, Friends-style.] Or maybe I’m being too hard on Joshy. Perhaps Chandler and Joey’s birds were actually out to get him. Can’t you just see the Chick and the Duck methodically pecking away at the front door of Chandler and Joey’s apartment in an attempt to get back across the hall so they can take Joshua’s eyes out? On second thought, maybe I’m scared of farm birds too. So if you’re keeping score at home, that’s the Chick and the Duck 1, Joshua Burgin 0. (I literally just had to Google “Friends Joshua” because I realized that I never knew his last name.) And much like Joshua took the L in today’s episode, I’m afraid I’m going to have to ask you, the readers, (using the logic of stable genius president, Donald Trump) to play the role of the Post Office to my Amazon and take the L as I mail in the rest of this episode. Hey, on the bright side, at least I’m not charging you $1.50 per blog post. On that note, I leave you today with this: Five, four, three, two, CHANDLER AND JOEY…FRIENDS FOREVER. Lift off.

Recap in the Key of Phoebe – This is the one where Alice asks Phoebe to choose the name for one of the boy triplets, Joey and Chandler compete to convince Phoebe to be the one she names the baby after, Rachel makes a plan to cook the perfect romantic dinner for Joshua, Monica cooks the food Rachel is taking credit for (as part of Rachel’s plan), Ross turns into one of his alter egos…Paranoid City Ross (sorry, not Red Ross) when Emily starts hanging out with Susan in London, and Chandler convinces Phoebe to name the baby Chandler thus winning this week’s battle in the eternal struggle that is Chanoey.

Chan Man Quip of the Week – [The Setup] Joey and Chandler are hanging out with Phoebe at their apartment and Chandler is looking at Phoebe’s book of names still shaken from Joey pointing out how stupid the name Chandler is. Feeling bad about it, Joey extends an olive branch by saying, “Dude, I am sorry about what I said!” Chandler responds, “No, no, you’re right, it is a ridiculous name!” Hoping to reassure him, Joey says, “It’s not that bad.” Undeterred, Chandler defiantly continues, “Yes it is! From now on, I have no first name.” Perplexed, Joey asks, “So, you’re just Bing?” [The Knockout]. After processing the implication of not having a first name, Chandler amends his prior statement with, “I have no name.”