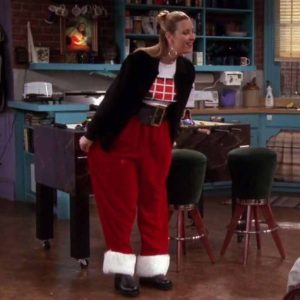 Friends S4:E19 – Morning’s here! Sunshine is here! The sky is clear, the morning’s here! The morning’s here!. How’s it going this fine Monday morning, Friendsters? I’m happy to announce that (including today) there are only five episodes remaining in this, our fourth installment of Friends 20/20. Man, that summer vacation cannot get here soon enough. Thanks to the nice weather we have on tap this week Denver (with a high of 79 degrees tomorrow), I’m already having visions of the sand between my toes and the umbrellas in my drinks that I’ll be enjoying in an undisclosed tropical location in exactly 30 days. That being said, there’s no time to dilly dally (or Dilly, Dilly for that matter). I’m on a mission to dissect this episode with the cool precision of a Masters’ winning putt, and then get into the club house quicker than Patrick Reed aka Captain American after winning his first green jacket. Who’s with me? Okay, good. In today’s episode, we find Monica and Rachel at their wits’ end from living in Chandler and Joey’s hole of an apartment. Monica and Rachel start conspiring to figure out a way to compel Chandler and Joey to agree to give then the good apartment back. When Rachel happens into her father’s Knicks season tickets (via her mom winning them in the divorce), the ladies believe they have the juice to get the gentlemen to agree to trade back. And had they just been negotiating with Joey, who lives life by the creed The Knicks Rule All, they would’ve been right. Chandler, however, proved to be a tougher nut to crack and when they couldn’t get him to agree, they made the rash decision to repeat the mistake that got them into this mess in the first place: gambling for the apartment. Of course, Monica and Rachel lose the bet (again) leaving Chandler and Joey with both the good apartment and the Knicks season tickets. However, under advice from counsel (none other than the inventor of Phoebeball herself), Monica and Rachel stage a Sneak Attack and switch the apartments back while Chandler and Joey are at the Knicks game. (Gandalf Gaffe alert.) Then, in a moment of pure, unfiltered comedic joy, Joey enters into his and Chandler’s old apartment (what is supposed to still be Monica and Rachel’s apartment but has now been switched back) and goes to the fridge to grab beers without even noticing the change. Predictably, Chandler is upset and goes across the hall to be greeted with the declaration, “WE TOOK OUR APARTMENT BACK.” Even more predictably, the Great Department Swap of 1998 is settled once and for all when Monica and Rachel agree to kiss for one minute in exchange for Chandler and Joey allowing them to keep the good apartment. So in the end, despite losing the big apartment, it’s a pretty good week for Joey Tribbianni. Not only is he now a New York Knicks season ticket holder, but once again he now has the privilege to wake up and begin every day with: Morning’s here! The morning’s here! Sunshine is here! The sky is clear, the morning’s here! Get into gear! Breakfast is near! The dark of night has disappeared!!. Oh yeah. Also, Ross got engaged to Emily. Late.

Recap in the Key of Phoebe – This is the one where Monica and Rachel challenge Chandler and Joey to a bet to win their apartment back after they can’t convince Chandler to trade it back for Knicks season tickets, Ross impulsively proposes to Emily, Phoebe wears Santa Clause’s pants and creates a new sport, and ultimately Monica and Rachel steal their apartment back and convince Chandler and Joey to let them keep it by kissing for one minute after losing both the Knicks tickets and the good apartment in Phoebeball.

Gandalf Gaffes – Welcome to about as straight forward of a Double G as your ever going to see. In Friends S4:E12 and Friends S4:E13 it takes a great deal of time and care for Monica and Rachel to complete the process of switching apartments with Chandler and Joey (particularly for Monica). However, in this episode, Monica, Phoebe, and Rachel complete the process within the three to four hours that Chandler and Joey are at a New York Knicks basketball game. We can all agree that this is impossible but because it was done to enhance the comedic punch of the storyline, I am ruling it a level one infraction.

Gandalf Gaffe #19: Monica, Rachel, and Phoebe switch Monica and Rachel’s apartment with Chandler and Joey’s during the time that Joey and Chandler are at a Knicks game. We all know this is impossible. And since in Friends S4:E12 & E13, it takes the normal amount of time and care to conduct the move, this is a gaffe.

Chan Man Quip of the Week – [The Setup] Joey and Chandler are hanging out at Central Perk when Ross comes in. They both immediately notice something different about Ross: he’s rocking an earring. Joey says, “Hey” while soaking in the change. Chandler follows with, “Oh my God!” Joey pounces again by asking, “We don’t make enough fun of you already?” Trying to explain himself, Ross responds, “Oh yeah, Emily convinced me to do it.” Chandler sarcastically asks, “You do know that Wham broke up?” Unfazed, Ross responds, “I like it, and Emily likes it, and that’s what counts.” He then tries to change the subject by asking, “So uh, how are you guys doing?” Having none of Ross’s deflection, Joey answers, “Oh-no, don’t try and talk all normal with that thing in your ear.” He proceeds to tickle Ross’s ear. Unlike Joey, Chandler accepts Ross’s cue to move on and asks, “Where is Emily?” Ross answers, “Ugh, she’s saying good-bye to her uncle.” Chandler continues, “Man, didn’t she like just get here?” Agitated, Ross responds emphatically, “yeah, yeah” while flailing his arms and hitting Chandler. Taken aback, Chandler cautions, “Easy tiger.” Visibly frustrated, Ross elaborates, “I just, I hate this so much! I mean, every time I go pick her up at the airport, it’s-it’s so great. But at the same time I’m thinking, ‘Well, I’m gonna be right back there in a couple of days, dropping her off.'” Chandler asks, “So what are you going to do?” Responding while thinking it through, Ross says, “Nothing! There’s nothing to do! I mean, she lives there, I live here. I mean, she-she’d have to uh, move here. She should move here!” Caught off guard, Joey interjects, “What?” Agreeing with himself, Ross continues, “I could ask her to live with me!” Equally caught off guard as Joey was, Chandler asks, “Are you serious?” Continuing to talk himself into his own epiphany, Ross asks, “I mean, why not! I mean, I mean why not?” Trying to snap him back to reality, Chandler answers, “Because you’ve only known her for six weeks! Okay, I’ve got a carton of milk in my fridge I’ve had a longer relationship with!” Hoping to convince Joey and Chandler (or maybe just himself), Ross argues, “Look guys, when I’m with her it’s-it’s-it’s like she brings this-this-this great side out of me. I mean I-I-I love her, y’know?” And countering by trying to expand on the logic of his last statement, Chandler replies, “And I love the milk! But, I’m not gonna ask some British girl to move in with me!” After realizing that his argument is flawed, Chandler defers to his partner in crime, asking, “Joey, you say things now.” Happy to jump in and save Chandler, Joey tells him, “All right look, Ross, he’s right. Emily’s great, she’s great! But this way too soon, you’re only gonna scare her!” Finally taking the bait, Ross responds, “I don’t want to do that.” Joey agrees and emphasizes the point with, “No! You don’t want to wreck it, you don’t want to go too fast!” Convinced, Ross concludes, “Yeah, no, you’re right, I know, you’re right, I’m not, I’m not gonna do it. All right, thanks guys.” [The Knockout] As Ross gets up to leave Central Perk, Chandler zings him with, “Okay, no problem, just remember to wake us up before you go-go.”