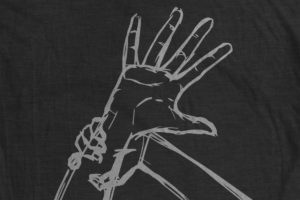 Because maybe you’re gonna be the one that saves me.
* * *

We played well enough to win. We made every single adjustment we needed to make. We lured the Warriors into 15 turnovers while only committing nine ourselves. Our defense was ferocious and our intensity exceeded our opponents. Most importantly, LaMarcus Aldridge was a beast. The player of the game punished Golden State with 34 points (11-21 from the field, 12-12 from the stripe) and 12 rebounds. We led by six at halftime. We led by one with 4:44 left in the third. We were right there. Sometimes you can do everything you need to do and it’s still not enough. Asterix Champion Kevin Durant and Proven Champion Klay Thompson combined for 63 points on 22-39 shooting. The Warriors as a team went a sharp 15-31 from deep while we went a putrid 4-28. Sometimes shots don’t fall and you simply can’t win in the playoffs (especially against the champs) shooting the basketball like that. What’re you gonna do? Back in Silicon Valley at Oracle on Monday night, the San Antonio Spurs fell once again to the Gluttony of More Golden State Warriors 116-101 to fall into an 0-2 hole in our Western Conference First Round series.

The bottom line is that if we had hit more of our wide-open threes in Game 2 and if Bryn Forbes hadn’t committed that bone-headed “clear path” foul that set Klay Thompson off on his own personal 6-0 run early in the fourth quarter, the Spurs would’ve won Game 2 and the entire complexion of this series would be looking entirely different right about now. As far as I’m concerned this is a relatively evenly matched series. Both teams are missing a superstar. LaMarcus is playing at such a high-level right now, he basically cancels out Durant. Is Klay better than anything we have as a second option? Sure, but I’ll put the collective experience of Coach Pop, Parker, Ginobili, Gasol, Mills, and Danny Green up against Steve Kerr, Thompson, Draymond Green, Andre Iguadola, Sean Livingston, and David West and really like our chances. We are a really good home team so if we can figure out a way to take care of business down in the Alamo City tomorrow and Sunday (while Fiesta is conveniently popping off with Oyster Bake), all of the pressure shifts back to Golden State for Game 5. What part of die-hard don’t you understand? I will never stop believing. I will never give in. I won’t back down.

I was in the final stages of editing this post when the news broke of Erin Popovich’s passing. This is such devastating news. Coach Pop kept his family life extremely private but from all that I’ve read and heard over the years, Erin was remarkable person. I want you, the readers, to know that everything I had previously written for this post (the Kawhi letter, the Game 2 analysis, the unwavering confidence in our chances to turn the series around) seems embarrassingly trivial now when juxtaposed against humanity and mortality in such an acute, piercing way. This has been such a tough week. Already this week I’ve been reflecting upon the passing of a close family friend in Texas, a colleague of mine in Germany, and former First Lady Barbara Bush. It is only Wednesday. Rest in peace, dear Erin Popovich. My heart goes out to you and your family, Coach Pop. May the outpouring of support from the NBA community and your #SpursFamily bring you some comfort.