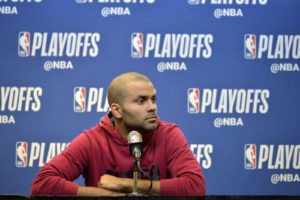 I Won’t Back Down – Don’t worry. I’m not gonna to do what you all think I’m gonna do, which is, you know, FLIP OUT AND PREDICT WE’RE GONNA COMEBACK AND WIN THE SERIES. Can I be Phoebe Buffay’s little brother? Can I be Frank? Frankly, I don’t have the energy. It’s been a long, long week and there’s no other way to put it, I’m tired. And as I said to close Two Saṃsāra, our purpose here “seems embarrassingly trivial now when juxtaposed against humanity and mortality in such an acute, piercing way.” As a devoted Spurs fan, my focus is not on what happened in Game 3 or what is going to happen in Game 4. My focus continues to be on Coach Pop, his family, and the journey that they were enjoined to begin on Wednesday. Grief is a difficult peregrination. My heartfelt advice during moments like these? When we walk, we walk towards our memories.

The player of Game 3 was Tony Parker. Not for the 16 points (6-12 shooting) in 17 minutes that Tony contributed during his best on-court performance in weeks. But rather for his off-the-court performance leading the team through tragedy and during a period of mourning. Even though the Golden State Warriors defeated the San Antonio Spurs 110-97 on Thursday night in the AT&T Center, the grace through exceptional heartbreak that Tony Parker and his teammates demonstrated was an incredible victory. I think as a #SpursFamily, we all knew that we’d be measuring success differently this postseason, but even that has taken on new meaning since Wednesday evening. When asked during the Game 3 postgame press conference about the normally embarrassing prospect of getting swept on our homecourt, Tony said, “It’s hard to think about that for me personally right now because there’s other stuff bigger than basketball.”

Amen, Tony. And while I’d have felt comfortable ending this post with that sentiment, for historical purposes, I’d be remiss if I didn’t at least acknowledge that once again tomorrow, as we had to last year in Game 4 of our series against the Warriors, we must brace for the possibility that Manu Ginobili is playing his last game. Having now pointed that out, I’ll close by allowing the other leader of the #BlackAndSilver to provide even more clarity for the moment we’re in. Manu said this morning that this is “a very unique situation. I’ve never been through something like this. You know, how important Pop is, not only for us players, the whole organization, the whole NBA, and seeing or feeling the way he should be feeling at this point, it hurts. We are struggling a little bit.” So no, today I’m not gonna do what you all think I’m gonna do and predict the first 0-3 comeback in NBA history. Today, I’m going to pray.