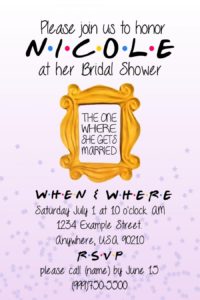 Friends S4:E21 – Hey there, Friendsters. How’s everyone doing on this pleasant Monday afternoon? I’m happy to report that since last week’s editor-approved mail-in-special, Ted James has gotten back on top of the 2018-edition of his Black & Silver blog series and thankfully does not need my assistance today in finishing his post covering yesterday’s heart-warming San Antonio Spurs Game 4 victory. That means, girls and boys, that once again you and today’s FRIENDS episode have my undivided attention. While it feels good to have a singular focus again this week, I won’t lie…it was also kinda fun last week (since my editor was the one authorizing) to have a guilt-free mail-in special. That being said, let’s get in to today’s proceedings, shall we? Please open your hymnals to page 421 and prepare to sing the praises of The One with the Invitation. Upon doing a quick Google search for “Friends” and “Invitation” I discovered that friends-styled engagement, bridal shower, wedding, and birthday invitations are actually a thing. It never ceases to amaze me how many FRIENDS fanatics are out there in the world and what lengths we, as FRIENDS fanatics, will go to to celebrate our love for the show. Could a FRIENDS-themed bridal shower invitation be any more dope, Nicole from Anywhere, USA? Having just delivered some mad FRIENDS props, I actually want to spend the majority of our time today talking about one of my biggest criticisms of the show. Have you ever noticed that an instrument that the FRIENDS show runners turn to repeatedly is the Flashback episode? Of course you have because there’s like, I don’t know, a million of them. Okay, so that’s an exaggeration but while many sitcoms deploy this tactic (partially out of nostalgia and partially to cut down on filming), we will come to find, as we continue our long, crazy journey together over these next six years, that FRIENDS goes to this well way too often. In fact, we will come to find that FRIENDS makes so many Flashback episodes, the use of this instrument ultimately is one of our biggest vulnerabilities when arguing the case for crowning FRIENDS as the GOAT ? sitcom. I mean, it’s only Season 4. Really, Crane and Kauffman? You couldn’t have waited a little longer to hit us with a flashback episode chronicling the highs and lows of Ross & Rachel? What, was your writing room too enamored with following the soap opera-esque developments in the Clinton-Lewinsky scandal to write a full episode that week? I don’t know, to me it just seems like the use of the Flashback episode as an instrument only becomes appropriate in the sixth season of a television program’s run or later. The fact that FRIENDS went there so much sooner in its run is a major weakness in the show’s GOAT ? application in my book.

One of the major reasons why FRIENDS’ chronic use of flashbacks is problematic is because the use of the instrument does not hold up well overtime for repeated binge-watchers. In other words, it makes things very chaotic for those of us who choose to go through life existing in the FRIENDS vortex. The overuse of flashbacks really messes up the continuity of our day-to-day existence in that we need to use our current place in the series as a sort of Friends clock or calendar, if you will. For FRIENDS vortexers, our current place in the series has a very intimate relationship with our connection to the larger space-time continuum. So having the show jump around from scene-to-scene of past episodes and seasons during a Flashback episode is very disorienting. Fellow vortexers, do you ever get to a point in your never-ending circular FRIENDS binge cycle where you feel like you just watched an episode even though you know, based on where you are at the moment in binging the series, that it’s been weeks if not months since you last watched the episode? It’s feels weird like some sort of FRIENDS-centric déjà vu. You know the feeling, right? You’re watching The One with the Prom Video and it feels like you just watched it the other day, even though you know based on where you are in the FRIENDS vortex loop that it’s been a few months since you last watched the episode. It is my strong suspicion that one of the factors contributing to this FRIENDS-centric déjà vu is the regular overuse of the flashback as an instrument for more than half of the ten-year series run. Because we’re constantly being exposed to flashbacks while we’re binging, we’re being exposed to scenes from episodes that we haven’t watched in a while, so by the time you circle back around to watching the episode that the flashback scene originated from, it feels like it’s been a much shorter period of time since you’ve seen original episode then it actually is. So there you have it, the verdict is in. Going to a Ross & Rachel flashback vignette in Season Four was an epic fail, FRIENDS show runners. In your attempt to climb Mount Everest as the GOAT ? sitcom, this was the equivalent of making a plan to climb Mount Everest but then talking yourself into not only not climbing Mount Everest but not even renting the video about climbing Mount Everest or even getting up to rent Die Hard but instead committing to one day get up off of the couch again to rent Die Hard. You definitely took the L today (err… I mean 20 years ago today), Crane and Kauffman but shake it off. Tomorrow’s another day and in one week…it’ll be show day once again. I know you will pick yourselves up off of the mat and get ready to bring the goods again next Monday. Until then.

Chan Man Quip of the Week – [The Setup] Chandler, Joey, and Phoebe are hanging out at Central Perk reading a book about things to do in London. After reading from the book, Chandler informs Joey, “All right, check it out. Check this out. It says here that there’s a place you can go to rent videos of all the museums!” He continues to read before observing, “It’s almost as good as being there.” Joey chimes in, “It’s better! You can’t go to a museum in your underwear!” [The Knockout] Considering Joey’s proclamation and thinking logically about it, Chandler dryly observes, “Well, you could, but… probably just the one time.”