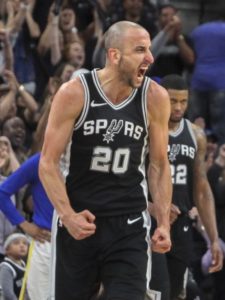 Pray – I mean, it’s basically stupid at this point. How many Is This Real Life moments can one individual, singular, unitary player of basketball have? Just when you think he’s reached the Tip Your Cap And Call It A Day bitter end and he can’t possibly continue to pull more of that handkerchief out of his pocket, his eye twinkles as he slips you a little wink and then proceeds to seduce you with a devious grin which draws your attention away from the fact that he is also continuing to pull that handkerchief out of his pocket. Yesterday afternoon, Manu Ginobili sold out the premiere of This Is 40: Part Two like it was Black Panther. I must say, it was mighty kind of him to select the AT&T Center as the venue for the premiere. The ageless one went so classic, he lit up Fiesta 2018 and the San Antonio skyline for a vintage fourth quarter performance that held the Warriors at bay and kept the #BlackAndSilver season alive. Manu scored 10 points in the fourth (including the final five points of the game) to help the San Antonio Spurs defeat the Golden State Warriors 103-98. Manu’s fourth quarter heroics included two breathtaking three pointers and an improbable You Want To Stop Me Bad But I Want To Score On You Worse turnaround push shot over reigning defensive player of the year Draymond Green. Overall, Ginobili finished the night with 16 points (5-10) shooting and five assists. Suffice it to say, the future-hall-of-famer was the player of the game. The victory had the further significance of making Manu and Tony Parker the winningest teammates in NBA Playoff history with 132 playoff victories together. Who, you might ask, did they surpass to secure this prestigious anecdote in NBA history? Only Tony Parker and a little-know retired Spur named Tim Duncan. That pair previously held the record with 131 NBA playoff victories as teammates. Sorry for the loss of your record, TD. But hey, you and Tony are still No. 2. Oh and bye the bye. You’re also No. 3. Timmy and Manu as teammates just so happen to be hold that third slot with their combined 126 playoff victories as teammates. In case you were wondering, Kobe Bryant and Derrick Fisher (123) and Michael Jordan and Scottie Pippen (117) round out the top five sets of most winningest teammates.

We can now officially say that the San Antonio Spurs have not only qualified for the playoffs but won at least one playoff game for twenty-one consecutive season. For those of you keeping score at home, that’s Tim Duncan years in a row. For those of you who are really keeping score at home that’s 172 playoff victories in 21 years. And for those who are JAY-Z counting at home, THAT’S AN 8.2 PLAYOFF VICTORIES EVERY DAMN SEASON AVERAGE. Ladies and gentlemen, I’m not a betting man but I would be comfortable in betting the farm that that is an NBA record that will not only stand for my lifetime, and not only for my unborn child’s lifetime, but it will also stand for my unborn child’s child’s lifetime. As much fun as it is to add more armory to the impenetrable fortress that is the sustained streak of excellence that the San Antonio Spurs have enjoyed these past two decades and change, I can’t lie…no matter what else happens this series, it felt so good yesterday to get a W. It felt Exhale A Well-Deserved Sigh Of Relief good to get a playoff W against that team during the most trying season in franchise history. Props to Ettore Messina. He did and excellent job in Coach Pop’s absence. (It’s really cool that a coach who helped develop Manu as a 21 year-old over in Europe also got to coach him during an NBA playoff victory as a 40 year old legend.). Props also to our reliable All-NBA power forward. LaMarcus Aldridge battled the Warriors inside for the entire afternoon yesterday to deliver a rugged 22 points (7-19 shooting) and 10 rebounds. Incredibly three of those seven made field goals just so happened to be three pointers. LA was perfect from beyond the stripe including a SUPER LIT bank three with roughly four minutes left in the game and the Spurs clinging to a four point lead which, like Manu’s clutch push shot, just so happened to be over reigning DPOY Draymond Green. So once again, I leave you (as I did in the last post) with no prognostications or expectations on what is going to happen tomorrow night in Game 5 back in Silicon Valley. All I know is that 30 something hours after that beautiful Game 4 victory, I’m still all warm and fuzzy inside with such a happy #GSG feeling. I know that feeling will be there when I wake up tomorrow morning but, much like a Fiesta party that spontaneously pops off in a neighbor’s backyard in the early afternoon, I’m trying to keep it going all night.