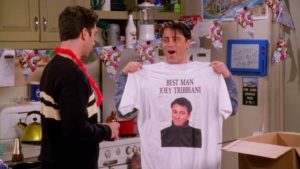 Friends S4:E22 – Greetings, Friendinistas. I hope Week 67 of The Resistance finds you well. I think it’s important to remember, as we fight day in and day out to keep the dark cloud of tyranny from snuffing out the light of our democratic institutions, just how slippery a slope to authoritarianism our current predicament possibly could be. This week, pop culture provided us a stark reminder. (Because I know you’re a media savvy group of students, I won’t be the least bit surprised if you already know where I’m going with this.). Did anyone happen to catch the release of The Handmaid’s Tale: Season Two, Episodes One and Two on Hulu this past Wednesday? (Or late Tuesday night if you were willing to sacrifice a little sleep in order to dive back into Gilead as quickly as possible.) If so, then you’re already well aware of the startling intersection between Unwoman (S2:E2) and the work we’re doing here with this blog series. If you haven’t already watched the first two episodes of HMT: Season Two then, SPOILER ALERT. We will be discussing June’s S2:E2 whereabouts in a revealing way so proceed with caution (you’ve officially been warned). Okay, with that formality out of the way… How freaking awesomely eery was it to watch as June discovered a dusty DVD copy of FRIENDS while hiding out at the former offices of The Boston Globe? And later when we see June getting a fleeting moment of peace and comfort from watching The One With Phoebe’s Uterus (S4:E11) on an old Boston Globe laptop? Simply chilling. There is so, so much to unpack here because The Handmaid’s Tale writer’s have proposed a wonderfully rich and deep basket of symbolism in their choice of making FRIENDS the DVD that June discovers and also specifically in their choice of the scene from FRIENDS that they show June watching on the old laptop. The choice of FRIENDS as what June is watching really hammers home the fact that she is a character that lives in a future that is unrecognizably terrifying to us as viewers but she comes from a past that she shares with us as viewers. It allows us to see that June came from the same world as us where becoming a fan of this fun, hilarious sitcom was part of being an American who came of age in the nineties. In other words, June watching FRIENDS hammers home in a very disturbing way just how easily, given the political unrest in our country, we could lose the world we have now to a future that is unrecognizable and awful. June watching FRIENDS also reminds us just how remarkably effective FRIENDS is in its role as Comfort TV. We all know that at times of stress or turmoil, we turn to FRIENDS to help us feel unburdened, or happy, or safe. From as best I can tell, there is not another television series in history that rivals FRIENDS in the number of people who regularly rewatch as Comfort TV. Therefore, it was very shrewd of The Handmaid’s Tale writers to have June, who lives a life of nothing but stress and turmoil, use Friends for this purpose.

Digging in a little deeper, the specific episode and scene that the HMT writers have June watching is pure symbolic genius. She’s watching the episode where Phoebe makes the free choice to be the surrogate for her brother and his wife. June is currently pregnant as a surrogate for a family where she was not given a choice, she was forced to do this as a slave. Obviously, the contrast is striking. More specifically, though, we see June watching the scene where Monica teaches Chandler how to please a women sexually aka SEVEN. Having June, a woman who had been enslaved to bare children for another family – who exists in a world where her sexual identity and desires are not only forbidden but any demonstration of their mere existence is considered a subversive threat against the government of Gilead, demonstrate enjoyment from watching a scene from a world she once knew where female pleasure was a thing of value and worth celebrating is a spectacular use of symbolism. It’s also interesting to me that the HMT writers chose FRIENDS S4:E11 for another reason. As you know, we just covered this episode in January with the Friends 20/20 post Erotiery. On a hunch, I did a quick Google search and sure enough, it was reported that The Handmaid’s Tale was spotted filming Season Two in Toronto in January. So in other words, The Handmaids Tale chose to film a nod to Friends S4:E11 at roughly the 20-year anniversary of the episode which gives HMT some sort of weird symmetry with us, the Friends 20/20 Nation. That is pretty freaking sweet if you ask me. Here’s one other weird observation from June watching this specific episode of FRIENDS: Chandler makes a random reference to Donald Trump in this episode saying he wants his Blue Blazer Black. (Apparently, Mathew Perry screwed up the line “Blue Blazer Back” but the other FRIENDS actors roles with it and improved something so funny, the show runners kept it in the show.) I thought this was worth mentioning considering how June watching an episode that mention Donald Trump resonates because of Trump now being in power, the spooky parallels between Mike Pence’s beliefs and Gilead, and the slippery slope to authoritarianism. How’s that for a little food for thought?

Speaking of Mike Pence, here’s a question. Of all of the FRIENDS characters, which one would be most likely to eventually become a Pence 2020 supporter and by consequence participate in the movement that goes on to overthrow the United States of America and usher in the era of Gilead? Come on, class. This one is so easy. Why it’s Gunther Centralperk, of course! Can’t you just see Gunther living out his retirement years as a henchman for Captain Fred Waterford? I mean, getting Serena Waterford her coffee everyday? Yeah, exactly. You know these things to be true, Gunther Centeralperk. Don’t act like your decade of repressed sexual desire for Rachel during the nineties didn’t have a seriously disturbing affect on your mind and worldview that is going to manifest in very dangerous and disturbing ways once Mike Pence rises to power. What was that? Gunther, did you just say goodbye to us by saying, “Blessed be the fruit?” How dare you sir. On that note, I’ve gotta wrap this thing up before it goes off of the rails. We all have had so much to digest here from The Handmaid’s Tale use of Friends S4:E11 that we haven’t even had time to get into Friends S4:E22. In today’s episode, Ross makes Joey his best man, Joey sleeps with the stripper from the bachelor party that was attended by the Dinosaur Dudes and subsequently loses Ross’s wedding ring, and hilarity ensues. Oh, and by the way. WE ONLY HAVE ONE MORE CLASS BEFORE SUMMER BREAK. Your final exam for this semester of Friends 20/20 is to take some time reflecting on the implications of the intersection between The Handmaids Tale and FRIENDS and what this intersection means in terms of our efforts to #resist the normalization of the Donald Trump Presidency. Be ready to discuss next Monday and have a productive week under his eye.

Recap in the Key of Phoebe – This is the one where Ross chooses Joey to be his Best Man out of spite to Chandler, Joey loses Ross’s wedding ring after sleeping with the stripper from the bachelor party he through Ross at his apartment, Chandler concocts a plan to lure the stripper to his office to confront her about the missing wedding ring, Phoebe experiences severe mood swings from her pregnancy, Monica and Rachel throw Phoebe a disaster of a baby shower, and the guys discover that the Duck ate the wedding ring which thereby eliminated as suspects the stripper, Gunther, and the Dinosaur Dudes.

Chan Man Quip of the Week – [The Setup] Chandler, Joey, and Ross are hanging out at Chandler and Joey’s apartment and Joey is trying to figure out a good way to let Ross know that he lost the wedding ring. Joey casually tells Ross, “So uh, hey, that uh, that wedding ring, huh? Man, that’s nice!” Flattered, Ross agrees, “Yeah, right!” Joey nonchalantly continues, “I was uh, I was thinking I might want to pick one of those babies up for myself, I might want to get one of those…” Before he can finish, Ross cuts in to declare, “That ring? When my grandmother first came to this country, that ring and the clothes on her back were all she had with her.” Enjoying the hell out of this exchange, Chandler mischievously interjects over Joey’s shoulders, “So you might say, the ring is irreplaceable?” He gives Joey a subtle squeeze. Ross answers, “Oh absolutely! It has been in my family for generations, and every bride who has worn it has had a long and happy life.” Having too much fun with this, Chandler suggests, “So you might say, it’s a magic ring.” Figuring this is as good a time as any to break the news, Joey mutters under his breath, “Yeah, the stripper stole it.” Internalizing what Joey just said and then proceeding to freak out, Ross shouts, “My-my ring? My-my wedding ring? The-the stripper stole my wedding ring? H-how?! How could this all happen?” [The Knockout] With the glee of a thousand sarcastic and vengeful suns, Chandler theorizes, “Well, I think it all started when you said, ‘Hey Joey, why don’t you be my best man.'”