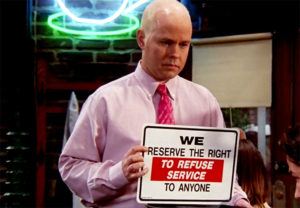 Friends S5:E2 – It has been four long, hard years since she first walked into my life. Sure, when that happened she was a hot mess – drenched and wearing a wedding dress that she clearly didn’t need to be wearing. Everyone else here in the coffee shop probably thought she looked crazy. But not me. I didn’t care. She was an angel, the most beautiful woman I had ever seen in my life. Four long, excruciating years. Of course it was the biggest break of my life when she decided to come waitress here at Central Perk. But as amazing as it was to have her close by for eight hours a day, five days a week…it was also torture. It was like finding out there is a store that exclusively sells pink, purple, and yellow shirts only to discover when you try to shop there that not a single item in the store comes in your size. I mean, if she wasn’t dating that Italian Fabio bozo then she was doing the “getting back together” thing with that tool Barry. But worst of all by far? That stupid, stupid doofus, Ross. God, I hate him. I could just smack the crunchy hair right off of his head. How on earth did she ever find HIM sexy? He’s such a dweeb. I mean, he’s not even close to being in the same league as me. I was Bryce on All My Children for Christ’s sake. He plays with Dinosaurs for a living. DINOSAURS. Seriously, Geller? When the third grade teacher asked you what you wanted to be when you grew up, you do know you weren’t legally obligated to follow through, right? And of course, while dating him, Ross convinced Rachel to quit her job at Central Perk. That one killed me. She was happy here and he just couldn’t leave well enough alone. We could’ve worked together here for the next 40 years, but nooooooo…after getting involved with Ross, she got it in her head that coffee wasn’t a glamorous enough career. Like fashion is better? Whatever. I will never forgive Ross for taking the 40 hours a week I spent with Rachel away from me. I mean, now that she’s just a customer, she only spends about 33 hours a week hanging out at the Perk. That’s seven hours a week and 28 hours a month less that I get to see my queen. Thanks a pant load, Tyrannosaurus Ross.

I still remember the day that my roommate at the time, Jasmine, told me that this moron had cheated on Rachel with Chloe from the copy shop. (YOU’VE GOT TO BE THE DUMBEST IDIOT ALIVE TO CHEAT ON THE MOST BEAUTIFUL WOMAN IN THE WORLD.) I won’t lie. Even though my plan didn’t work out, I really, really got a lot of pleasure out of being the one to tell Rachel that Dinosaur Boy was stepping out. Oh, what was my plan? Yeah, my plan was that after I told Rachel about Ross cheating on her, she would be so distraught she would need to find comfort in the arms of a friend and former co-worker. I assumed that she would melt into my arms crying when I delivered the news and before you could say, “platinum blonde hair dye,” tah-dah, we would become lovers. As you know, since we’re sitting here today and I’m wearing my lament on my pink sleeve, that’s not what happened. Instead, she just sulked over to a window seat and sat there in a daze until that weasel Ross came dashing into the shop asking me to lie for him. (WHAT. A. SNAKE.) Nonetheless, even though that wasn’t Rachel’s and my moment, at least the Rossasaurus was finally out of the picture. At that point, I thought I’d give my darling Rachel a little time to get over the trauma of being cheated on. But of course, just when I was plotting to finally ask her out, that frat bro, douchebag Mark from her fashion job got to her first. Lucky for me, that didn’t last long. But after Mark, quicker than you can say “clean the cappuccino machine,” (because Rachel and all of her “friends” hang out at the Perk everyday, all day), I caught wind of the rumor that Rachel was still in love with stupid Ross, even though he was engaged to some British twit named Emily. As much as I hated the idea of Rachel still being in love with my arch enemy, at least Ross was engaged to someone else. Suffice it to say, I was a BIG fan of the Ross and Emily relationship. I won’t lie, at the time I was hoping that that Emily was doing the kinds of things to him in bed that would make him marry her fast and never, ever look back again to what he had with Rachel.

As you can imagine, I was really nervous last week when Phoebe told me that Rachel had flown to England to try to ruin the wedding by informing Ross she was still in love with him. When Chandler and Joey got back and told me that Rachel was in Barbados on Ross’s honeymoon, I nearly had a heart attack. Luckily, later that day, Monica clarified that Rachel was there but Ross wasn’t because he actually married Emily. So why, then, was Rachel in Barbados instead of Ross and Emily? She also said that Ross accidentally said Rachel’s name during the service. (WHAT. A. BONEHEAD. Although, in fairness, I can’t really blame him for that one. I’ve practiced saying my “I do’s” to Rachel in the mirror several hundred times since I first met her.) At this point, I was relieved to hear that Ross followed through on marrying Emily but, at the same time, I was a little worried that that Ross / Rachel door was still slightly cracked open by the accidental name incident. At any rate, Rachel returned yesterday from her trip to Barbados and, while sitting here at the Perk, she wisely decided that she needed to move on from Ross. She FINALLY said she was ready to date someone else. HALLELUJAH! Wait, it gets better. By the grace of God, Monica got involved and asked, “What about Gunther?” Those magical words. My heart almost leaped into my throat. My moment had finally arrived. I listened intently from behind the bar as Rachel started responding, “Yeah, I guess Gunther is kinda…” I SWEAR TO GOD she was about to say, “cute” when Ross’s annoying sister cut her off and pointed to that male-model-looking-type dude Dave that is a frequent customer here, saying, “Oh, what about that guy over there? That is the guy you flirted with at the counter that time.” Monica went on to convince her to go and talk to him and before you know it, she had asked Dave out on a date. I died a thousand deaths. I also marched over to that ass-munch Dave with the “we reserve the right to refuse service to anyone” sign and kicked that fool to the curb, LOL. As good as that felt, it didn’t make up for how close Monica had come to making my life perfect before subsequently stomping on my heat. Monica giveth and Monica taketh away. Now, once again, I am forced to wait as Rachel dates Dave (or figure out a way to sabotage her new relationship). And if that is what I must do, that is what I must do. One day Rachel will be mind. Oh yes, one day she will be mine. Four long, painstakingly horrific years. Damn the Gellers. Damn the Gellers to hell.

Recap in the Key of Phoebe – This is the one where Rachel admits that she thinks Gunther is cute, Phoebe is frustrated that the rest of the gang have all of these shared “insider” memories of their trip to London that she wasn’t a part of because she was too pregnant to travel to Ross’s wedding, Chandler pretends to have picked up a new, European farewell kiss when he accidentally kisses Monica in front of Rachel and Phoebe, Monica is elated when Rachel puts her in charge of making her decisions for her, Joey goes out in search of Boddington’s – a London beer- in NYC, Ross attempts to send Emily 72 long-stemmed red roses to make up for the fact that he said Rachel’s name at the wedding and then invited her on their honeymoon, and Rachel moves quickly past her attraction to Gunther to allow Monica to direct her to ask out Dave instead which in turn begs the question, “what about Gunther?”

Chan Man Quip of the Week – [The Setup] The gang has just left Monica and Rachel’s apartment to go to the hospital because Phoebe’s water broke. Everyone else has already gone downstairs but Monica and Chandler decide to linger behind in the hallway to get some alone time. Monica says to Chandler, “I can’t believe Phoebe’s gonna have her babies!” Chandler responds, “I know, it’s beautiful. Amazing.” They proceed to kiss in celebration of the exciting moment. After the kiss, Chandler offers, “Y’know what else I can’t believe? I had to kiss Phoebe and Rachel every time I left a room.” [The Knockout] Continuing with a gleam in his eye like he’s just discovered evidence of life on another planet, Chandler proposes, “I mean it’s too bad they didn’t see us having sex.”

Featured Image Source: We Heart It