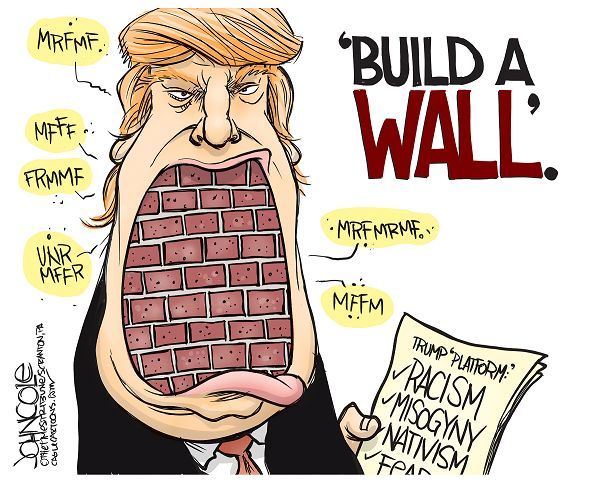 Friends S5:E12 – Greetings, Friendinistas. I hope Week 105 of The Resistance finds you well. Given that we are reconvening as an indisputably unnecessary government shutdown is beleaguering our country, I hope you’re having a resilient MLK Day. We reflect on Dr. King’s legacy today while we simultaneously struggle to overcome the racism and fear mongering behind the manufactured crisis that has resulted in millions of federal employees struggling to make ends meet after weeks of not getting paid. The moment we are in is an important reminder that part of the hard work of realizing King’s inspirational vision that “the arc of the moral universe is long, but it bends toward justice” means figuring out how to bend the arc around walls. The challenges we face from the presidency of Donald Trump (aka Mr. Bigot) are numerous and fierce. Hopefully the magnificent legacy and example provided to us by leaders such as Dr. King coupled with opportunities for reflection on days such as today help to replenish our moral reservoir and rekindle the vital hope that we will come out the other side of this thing a stronger and more just society. Keep fighting the good fight, sister and brothers. If we remain diligent in our resistance, King’s words will once again prove prophetic. In 92 weeks (on Tuesday, November 3rd, 2020) we have the opportunity to ensure that the moral arc will bend towards justice once again. If we’re successful, the racists, the misogynists, the xenophobes, etc. who have been empowered by Donald Trump (aka Mr. Bigot) will be forced to admit on Wednesday, January 20th, 2021, “the sun has set on our day in the sun.”

Okay, class. Sorry to shift gears on you. After the important conversation we just wrapped up, I know this is going to seem trivial by comparison, but as you all know…your New Year’s Resolution homework assignment is due today. (You didn’t really think I’d forget, did you Johnny?) If you remember, you are all expected to report on what your New Year’s resolution is and whether you have been successful in keeping it for the first three weeks of the year. As an added bonus, the student with the best presentation will receive a Nutter Butter as a prize. I, of course, will serve in the Joey Tribbiani role as judge of this here competition. So without further ado, let the competition begin and the presentations commence. [Long pause for presentations] [A handsome man walks to the front of the classroom] Well done, class! Those were some lofty and noble New Year’s resolutions you just presented on. I’m really excited to hear that almost half of the class has kept their resolutions for the past three weeks and is still on track to achieve your goals. While almost all of you will be receiving an A on this assignment (sorry Johnny, I don’t find your resolution of making Mr. Adams life a living hell a resolution worthy of an A), there can only be one winner. [Drum roll]. Congratulations, Susie. Your resolution of fostering an abandoned duck and keeping it as your pet (Joey and Chandler-style) for the entire year was both inspiring and admirable. You receive extra credit for how you drew inspiration from the Friends 20/20 textbook and applied it to your real life. Bravo, Susie. It probably goes without saying, but, “the duck gets the Nutter Butter!” The shameless integration of a quote from today’s episode into the fictional classroom this blog series has cultivated into has been brought to you by Ichiban. (Ichiban: lipstick for men.) That’s it for today, class. Keep up with your resolutions and keep on resisting. Solidarity forever ✊

Recap in the Key of Phoebe – This is the one where Monica discovers Chandler’s super-phony work laugh after she and Chandler start hanging out with Chandler’s boss and his wife so they don’t have to hide their relationship and can be a “real couple,” Ross is so depressed after he finds out Emily is getting re-married that he hooks up with Janice (Chandler’s annoying ex-girlfriend), Chandler becomes worried when Ross tells him the rules about dating your friends’ ex-girlfriends or sisters and, in order to minimize the damage when Ross inevitably finds out about him and Monica, pretends to be angry and then forgive Ross for hooking up with Janice, Joey acknowledges to Rachel that he doesn’t know very much about the nature of Monica and Chandler’s relationship, Phoebe loses a chick and duck “Nutter Butter” race when Joey is both her competitor and the race’s judge, Rachel presses Monica but can’t get her to admit her and Chandler’s relationship, and when asked by Rachel about a phone conversation she overheard…Monica claims Chandler’s nickname is Mr. Bigot.

Gandalf Gaffes – Today we have pretty straight forward Double G to add to the board. When Monica and Chandler are in Chandler’s room discussing their struggles in continuing to hide their relationship from their friends, Monica expressed remorse about lying to Rachel. During the discussion, she makes an interesting claim to Chandler. She suggests a long, uninterrupted closeness to Rachel when she tells Chandler, “Ever since high school Rachel was the one person I told everything to.” Hmm, that’s weird. Last time I checked, it was established in The Pilot that Monica and Rachel drifted apart after high school and weren’t in regular contact by the time the show began. I mean, Monica wasn’t even invited to Rachel’s wedding to Barry and found out about it second hand. That’s a far cry from Rachel being “the one person I told everything to.” Monica’s blatant disregard for her and Rachel’s “distant” period when discussing their relationship with Chandler is a noteworthy gaffe but not too egregious so I’m ruling it a level one infraction.

Gandalf Gaffe #26: During an intimate conversation with Chandler discussing how difficult it’s become to hide their relationship from their friends, Monica expresses remorse over lying to Rachel and claims that since high school, Rachel is the one person she told everything to. However, The Pilot established that Monica and Rachel grew distant after high school to the point where Monica wasn’t even invited to Rachel’s wedding to Barry and had to find out about it second hand.

Chan Man Quip of the Week – [The Setup] Monica and Chandler have just returned to Monica and Rachel’s apartment after playing tennis with Chandler’s boss and his wife. Monica is upset with Chandler for sucking up to his boss and barks at him, “I can’t believe you let them win!” Chandler removes a busted tennis racket from his bag and sarcastically responds, “Yeah, at least you hid your feelings well about it.” Monica defends her actions saying, “I was frustrated.” Chandler bemoans, “It was my racquet.” Not backing down, Monica fires back, “I was frustrated with you!” Now on the defensive, Chandler moves the conversation along by pointing out, “If we hadn’t lost the game they never would’ve invited us to dinner tomorrow night.” Unable to hold back, Monica berates Chandler with, “Ya know what really bothers me? Is—it’s how-how different you act around them! I mean, ya know the throwing the tennis games, the fake laugh, the ‘I’ll see you around, Bing!’ ‘Not if I see you first, Doug!’ (Monica mocks Chandler’s fake laugh.) I gotta tell you, I don’t like work Chandler. Okay? The guy’s a suck-up. [The Knockout] Not knowing what else to do, Chandler decides to go nuclear, responding, “Okay ya know what? Because you said that, I’m not putting out tonight.”

Next post: We Will Meet at the Checkout Counter