We Will Meet at the Checkout Counter 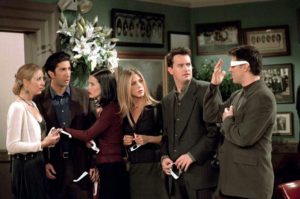 Friends S5:E13 – What? Is? Good? Friendsters? Can you believe it’s February already? Hope you’re warm, cozy, and ready to snuggle in with another sexy installment of Friends 20/20. How sexy? Well, you and I sexy, of course! So sexy, in fact, we (and when I say we…I mean society) get to witness one of our six favorite characters on our first favorite show experience a life-altering series of events. That character, of course, is our dear, dear Pheebs. First, Phoebe is forced to temporarily say goodbye to her grandmother Francis when Francis dies at the supermarket. Given all of Phoebe’s metaphysical beliefs, it’s not surprising that she isn’t overly torn up over her grandmother’s passing. After all, Phoebe knows (as should all of us) that she and her grandmother WILL meet again at the checkout counter.

Before the drama creating a new paradigm for Phoebe’s life continues, next she gets more confirmation of an old one. New Alert: Phoebe’s sister Ursula is still a self-absorbed narcissist. In other news, the sky is still blue. That’s right, when Phoebe goes to break the news to Ursula that their grandmother died, Ursula opts to skip the memorial service in order to attend a concert instead because she thought their grandmother had already died five years prior and therefore, she’s already made her peace with it. Let me just say, Ursula, you are one of a kind. Also, please be advised that that was not a compliment.

After getting blown off by Ursula, Phoebe’s life-altering series of events reaches its climax (you and I climax?) when Frank Senior, her father, shows up at her grandmother’s memorial service and then clumsily reveals himself to Phoebe. What an inopportune time to see your dad for the first time since he abandoned you, right when you’re trying to say goodbye to another family member who, in comparison, was there for you your entire life. Phoebe handles a tough situation as well as could be expected. When her father realizes he’s made himself vulnerable and announces to her that he needs to leave, Phoebe cleverly pretends to be Glenda – the executioner of Francis’s estate – in order to set up a meeting with Frank Sr. later at Central Perk by telling him that Francis left something for him in her will. With the appointment secure, Phoebe can turn her attention to mourning her grandmother by rejoining her friends in the funeral hall and putting on her 3D glasses to experience the memorial service.

After the service, Phoebe meets Frank Sr. at Central Perk and reveals her true identity. Her dad is dumbfounded by how beautiful his daughter is and Frankly (pun intended) I am too. After all, it’s not like Frank Sr. missed his calling as a GQ model. While guarded at first while they exchange 17 years worth of information, Phoebe takes a bold step towards intimacy with the father that abandoned her by holding his hand briefly. She then realizes it’s too soon. And that, ladies and gentlemen is one of the most thorough recaps of a character’s episode plot line that I’ve ever done during the entire run of this blog series. I’m felling pretty good about myself. In fact, I think I nailed this one and as a result, it’s time to celebrate. See you next week because I’m about to be walking out of the office and to the nearest bar like…we got it, we got it.
​
Recap in the Key of Phoebe – This is the one where Phoebe’s grandmother dies, Joey needs to dress fashionably for an audition so he gets a top hat, Ross almost sits on Joey’s top hat at Central Perk, Rachel helps Joey scrap the top hat by dressing him for the audition and giving him a man’s bag to wear during it, Monica gives bad massages, Chandler helps her feel better about it by suggesting she gives “the world’s best bad massage,” and a new door opens up for Phoebe when she meets her dad at her grandmother’s memorial service thus supplying her with something new to talk to her grandmother about when her “we will meet at the checkout counter” proclamation comes true.
​
Gandalf Gaffes – None. Flawless episode!

Chan Man Quip of the Week – [The Setup] Chandler and Monica are in Monica’s bedroom where Chandler is giving Monica a massage. Monica croons, “I can’t believe we’ve never done this before! It’s sooo good! So good for Monica!” Impatient with being the giver rather than the receiver, Chandler grabs the clock they are using as a massage timer and turns it to zero without Monica seeing. Acting surprised, he then says, “Oh! Look at that, time’s up! My turn! Confused but relaxed, Monica asks, “That was a half an hour?” Chandler digs in, telling her, “It’s your timer.” She reluctantly switches roles with him. As she begins massaging Chandler, Monica says, “Ya know, I don’t like to brag about it, but I give the best massages! (As an aside, I fell like this is kind of an insensitive boast aka dick mover on Monica’s part considering that Phoebe, one of her two best friends, is a professional masseuse. But that’s just me, I guess.) Chandler responds enthusiastically, “All right, then massage me up right nice!” She starts massaging him and he responds gasping in agony, screaming, “Ah! Ahh!! Ahh!!” Monica asks, “It’s so good, isn’t it?” Chandler manages to respond through the pain with, “It’s so good I don’t know what I’ve done to deserve it!” Pleased with herself, Monica tells Chandler, “Say good-bye to sore muscles!” [The Knockout] Playing through the pain, the most durable quipper in the sitcom game fires back proclaiming, “Good-bye muscles!!”