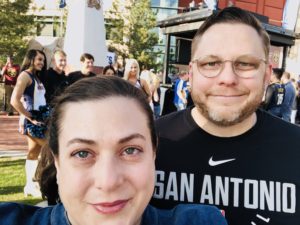 Break On Through – “It’s over. We just beat you by 20. You’re done.” Those words have echoed in my head since the moment they were spoken to me last night outside of the Pepsi Center as my wife and I were waiting for our Lyft. Dressed for a fun night out on the town in a black long-sleeved t-shirt that proudly displayed “San Antonio Basketball” across my chest, they certainty weren’t the first words spoken to me last night. Or the last. But they were the ones that stuck. Oh man, were they the ones that stuck. They were spoken with so much disdain, so much bravado. Considering I was just minding my own business and looking down in hopes of locating our driver on my phone, to be singled out and engaged with such hubris was quite fascinating. I was in awe. As this six-foot four-inch stranger stood over me peering down, finger in my face, I was almost giddy with delight to be conversing with an inebriated Nuggets fan who actually believed what he was saying. “”It’s over. We just beat you by 20. You’re done.” I mean, he had so much impudence, it was really impressive. Could he possibly be that unaware of the concept of tempting fate? Did he really not know that he was doing me a huge favor by sucking down bad karma in the parking lot after the game as fast as the beer he was surely chugging in the stands while enjoying a victory that a 35-8 home team is supposed to get at home in a Game 5? Did he really not know the Spurs history of playoff success? Did he forget that his team is still facing the greatest coach in basketball history? Could he really have been so heedless, he overlooked the fact that when the Spurs are at home with karma on our side that’s usually when our shooters get loose, and that means lights out? Did he really not know that the Spurs have never been eliminated in a Game 6 at home in 53 playoff series over 21 postseasons under Coach Pop? (In fairness, he probably didn’t know that one.) I won’t lie, I contemplated asking him for his home address so I could send him a thank you note later. It must’ve been fate for what else could’ve brought me such good fortune as to have the personification of Bad Nuggets/Good Spurs karma save an otherwise miserable night? Thank you, universe. Thank you for putting before me a man who was so overconfident that his team’s blowout Game 5 victory was proof that the Denver Nuggets were on their way to the Western Conference Semifinals, he just might single-handedly jinx it.

My good postgame fortune in the parking lot aside, I think it’s safe to say that my first-ever Spurs road playoff game was a major letdown. The game started out well enough with the Spurs hitting our first four shots getting out to an early 9-5 lead two and a half minutes into the game. But the early success was short-lived and when Gary Harris drained a three with 5:23 left in the first to give Denver its first lead (14-11), the Nuggets never looked back. The Pepsi Center was louder last night than I’ve ever heard it (which was to be expected since my prior experiences were all regular season games) and only kept getting louder as the Nuggets continued building their lead throughout the night. We were only down 11 at the half (53-42) but any hope we had of getting back into the game was obliterated when Denver went on a 7-0 run to start the third and expanded their lead to 18 points. The lead continued to swell to a third quarter high of 28 points (77-49) when Jamal Murray sunk a 26-foot bomb with 4:26 to play in the period and then a fourth quarter high of 30 points (101-71) when Monte Morris hit a 20-foot pull up jumper with 7:14 to play in the game. The outcome decided, everything from then on was a formality and the last 7 minutes may as well have just been a giant Denver Nuggets pep rally as the crowd continued to lather itself into a frenzy with every single meaningless made basket. The Spurs cut into the lead in garbage time but eventually fell by 18.

In defeating San Antonio 108-90 last night, the Denver Nuggets took a 3-2 lead in the series and put us on the brink of elimination. The player of the game was Jacob Poeltl. (Congratulations, Jacob on being honored as the Black & Silver POTG for the first time in only your fifth postseason appearance for San Antonio.) Our starting center had 12 points on 6-7 shooting, seven rebounds and a team-high four assists. On the other end of the court, he played tough in the middle as the primary defender on Nikola Jokic, helping to limit the Nuggets’ superstar to only 16 points on sub-500 shooting (5-11). DeRozan and Aldridge both added 17 points but both players also each missed multiple layups in the first half. In all, I think I counted five or six missed layups by the Spurs in the first half. Had we been able to consistently finish the easiest shot in basketball early on, it could’ve been a completely different game heading into halftime.

I’ve got the be honest. After a few too many adult beverages last night and a long workday today, I’m pretty freaking tired this evening. I’m physically and emotionally drained (I screamed my lungs out during the game in order to cheer on the Spurs and yell at the refs sufficiently enough to be heard over the raucous Denver crowd) and rather than spend much more time writing about last night’s beatdown, I’m looking forward to getting some extra sleep tonight so I can recharge the batteries. After all, there’s another game to be played tomorrow. I’ll say in closing that as a diehard Spurs fan who was in the belly of the beast last night, fellow diehard Spurs fans who will be attending Game 6 at the AT&T Center tomorrow need to bring it. Nuggets fans certainly did yesterday but I’ve also been in the AT&T Center during the playoffs and we can get louder than what I heard last night. It’s up to our players and fans alike tomorrow to demonstrate that we still want this series more than Denver because right now, I’ve gotta tell you, they believe otherwise. They’re so new to this whole playoff thing, they sincerely believe that one blowout loss is going to make us lie down. They’re also so naive (you know, being new to this whole playoff thing), they’re oblivious to the bad karma they’ve created through overconfidently telling us all about it in obnoxious, gloating fashion. Walking out of the Pepsi Center last night after Game 5, one thing was clear with the shift in demeanor of the normally cordial and cheerful Nuggets fans. Things done changed. “It’s over. We just beat you by 20. You’re done.” Sure, things done changed but one thing never does: #BlackAndSilver is eternal. Tomorrow night, back home in the comfortable confines of the AT&T Center, we have the opportunity to win a basketball game that can get us one pound closer to breaking another rock in our eternal hunt for the championship. It’s far from over. The San Antonio Spurs are never done.